The Missing quest is the first in the Harbinger of Madness series that is being released for Update 9 Dungeons and Dragons Online. This quest kicks the series off with a very spooky nighttime adventure. The story begins with the discovery that many citizens of the Saltire District of Stormreach have disappeared. You must agree to report on the story of the Missing. Once you do, you meet the reporter just inside the district at night. There is a guard and a member of the twelve on at the entrance. They give you a few more things to do while you investigate the strange happenings.

Before you head in make sure that you have spoken to Tessa Aster and you are on the right step of the Harbinger of Madness quest series so you can get the extra reward when it is done.

There are articles from the Stormreach Chronicle that are spread around in this quest and they really help to immerse you into the story and what is happening both in the quest and the series Harbinger of Madness. I encourage you to read through them at least once. 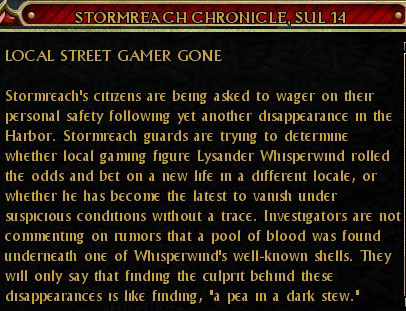 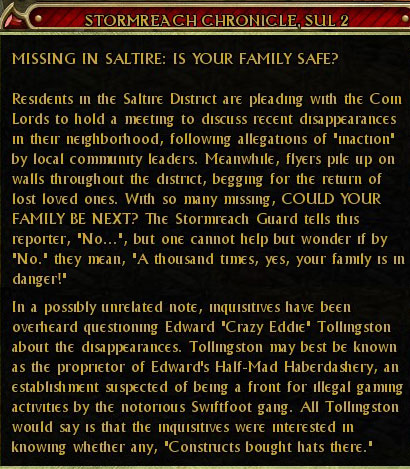 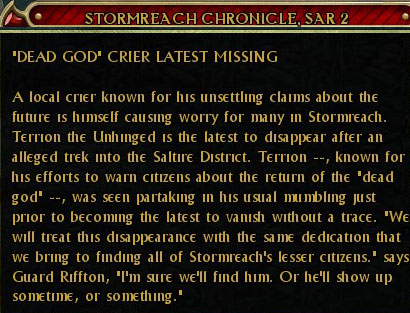 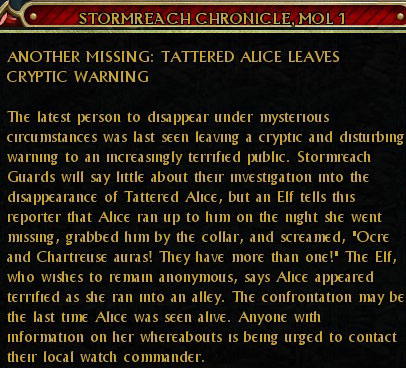 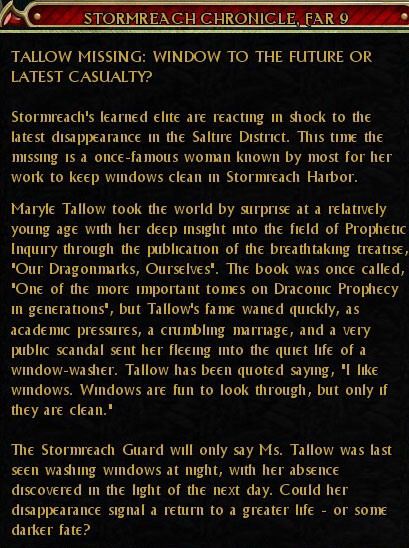 Buff up and talk to everyone on the dock. Make sure you get the optional, then head out.

You will come to a bar with a crazy guy out front. Mark him.

Inside the bar is Stormreach Chronicle, Sul 2, Talking about events of the district. You will see a gated door to the north and the mysterious warforged just outside. He looks a little… odd…. To open the door, go into the basement and hit the switch.

Head out to where you saw the warforged, and you’ll see another Stormreach Chronicle, Far 9, with a little more color. Watch out for the mad dogs and the Swiftfoot gangsters. Be sure to move around to the right (east side) and hit the switch to open the gate by the water. Make sure to head up the ladder right there to get some breakables and to mark another mad person.

Head across the bridge, taking out a few more Swiftfoot Gangsters, and go talk to Guard Boskin. He will not let you into this building unless you can find some evidence (3 pieces) of the warforged’s wrongdoing.

From here, either head into the school or you can head back to the water where you can find a secret passage that leads to the other side of the dungeon. Either way you will need to visit most of the area to complete. If you have an experienced group, you can split up here to take care of the objectives more quickly. Just be careful of dungeon alert, since it can go up fast with two groups fighting in different areas.

From here on, the guide will talk about the different areas so you can easily skip around to the section you need.

nside the schoolhouse you will find a few mind flayer mages and some Xoriat Hounds.

There is a rest shrine in the School House near the kitchen and dining area. There is a switch on both sides so it doesn’t matter what side of the school house you enter.

In the classroom, you will find the Schoolmaster, Kalleus Millne. You will notice the screen gets all wacky with the influence of Xoriat. He is quite mad and seems to be babbling to an empty classroom. Grab the Schoolmaster’s Attendance Book on the desk. This is one of the pieces of evidence you will need to enter the warforge’s home: A scrap of paper inside the book reads, “BILL OF SALE. One dozen schoolchildren, in good condition. Ship to Mister Smythe. Payment on delivery.”

Near the back of the Schoolhouse is a large courtyard area. There are many mad people here that could use a mark. Watch out for the mad dogs in the corner.

In the center of the courtyard is a pool. In this pool there is a tunnel that leads down to a lever that controls the water feeding the courtyard. You must hit this switch to continue through the water pipe. Just be ready for an ambush once you hit the switch. The courtyard above will fill up with Xoriat Renders and a few greater Thaarak Hounds.

Once they are all dead you can head into the Swiftfoot Sewers.

This is a small system of pipes that leads to the northernmost part of the map. Here you will find the Swiftfoot Sewers.

Some bats will spawn near the switch to the entrance to the Swiftfoot Gang Headquarters. Take care of these fluttery annoyances and head in. Watch out for the blade trap just inside.

It appears someone or something has gotten to the Swiftfoot Gang before you. Hit the switch to go into the easternmost room of their headquarters. Here you should get the message to report your findings back to Guard Prosser.

Hit the switch inside to open their treasure room. Be ready for another ambush one you crack the chest.

This can be a nasty one on elite as a bunch of Xoriat Renders will jump you as soon as the chest is open. The Turbulent Epee can come out of this chest.

Once you crack this chest, the rest of the dungeon will fill up with the Taken. So keep that in mind that they will respawn behind you, so there is no “safe route” back to the shrine. You will have to kill many Taken to get anywhere, and there are many!

On your way out of the hideout, be ready for a nice little ambush near the exit. This should be your first encounter with The Taken. They are strange amalgams of flesh and beast that mindlessly attack you, flinging nasty goo and other attacks depending on which type they are.

The rooftops connect the Swiftfoot Hideout and Sir Borsynne’s Noble Quarters. There is a handful of Xoriat Renders, Greater Thaarak Hounds and Taken if you have already been to the Swiftfoot Hideout. There are some more Mad People here that you can mark but no required quest objectives.

Here you will run into another Xorait distortion as well as a few Greater Thaarak Hounds and Mind Flayer Mages. Once the Xoriat distortions start, you know you are close to

another piece of evidence needed to get into Mr. Smythe’s house. Look near Sir Borsynee’s bed to find Sir Borsynee’s Diary. The final entry in the diary reads, “This Smythe fellow is involved in questionable activities. But I’ll use the Borsynne name to keep the guards away so long as he keeps sending platinum my way. In any case, no one will notice the disappearance of some common street rabble.”

There is a shrine you can use here near the dining area of the Nobel estate.

The open Market is in the south western part of the map near the armory and Sir Borsynne’s Noble Quarters.

Most notable in this area is the large Xoriat hound, Pale Fire. He is not too hard for a red named as long as you remember to stop meleeing him when his cold shield comes on. The damage shield he gets with the shield is very nasty and can mess you up even if you have cold resistance going. Make sure to loot up and heal up if needed.

If you are going for Ransack, be sure to smash things in this area, as many of the barrels can be hard to see in the scenery here.

Just inside the armory you will find a couple more greater Thaarak hounds and a Xoriat Render.

Take care of these and then hit the switch to head inside. Watch out for a Mind Flayer mage that can spawn in here.

Once the Xoriat distortions start you know you are close to another clue needed to get into Mr. Smythe’s estate, the Armory Account Book. The last entry in the account book reads, “Eight dozen sturdy iron cages, warranted to hold prisoners. Ordered by Mister Smythe and paid in full.”

This is a short tunnel system that is underwater but connects the south west and the south east sections of the Saltire District.

Be careful of the blade traps underwater.

There is a switch on both sides to allow you to go through if you want to use this route.

Upon returning to Burno Vass and Guard Prosser, you will find that the power of Xoriat has invaded their minds as well. Be sure you have completed their optionals before you talk to them. When ready, talk to one of them and they will both attack. Take care of the crazies and loot their chest.

Once you have collected all three pieces of evidence, return to Guard Bokin and he will allow you to enter. Make sure you have all the other optionals done at this time as you will be heading into the last fight soon.

Inside you will find Stormreach Chronicle, Sul 2.

There is one more shrine here. Shrine up, buff up and go confront Mr. Smythe.

You will soon learn that he is a beholder in a strange warforged suit. Z’miizith will monologue for a moment and then return to his natural form. Thankfully he doesn’t have an antimagic ray but he does have a lot of different crowd control-type spells and debuffs. Z’miizith is not too hard of a fight if your saves are good. If your saves are not too good it might get ugly!

As the fight starts, Taken will rush into the room to fight you. Take care of them fast so you can get back to the Z’miizith fight. The Taken will keep spawning as the fight progresses, so be ready for them even if you cleared the whole area.

The stairs behind you will vanish but a ladder will return after Z’miizith has been defeated, so you can head back into the dungeon if you really need.

Insanity can drop out of the End Chest in Missing quest.

Once you are done with this one make sure to talk to Godwick Spurge and then Tessa Aster and get ready for the next quest in the series, Sinister Storage.