The final confrontation between the drow, rakshasa and Lords of Dust sits before you. You have uncovered a plot to collect dragonshard for some unknown reason. More urgently however, you have learned that they plan to ultimately release one of the demon lords, the Spinner of Shadows. Head into the prison of the Spinner of Shadows and stop the drow and rakshasa from releasing the demon lord! If such a fiend is released just think of the kind of havoc a demon lord of this power would wreak upon the world? Go in alone if you are feeling brave, but this task may best be suited to your closest and most experienced friends and guild mates. 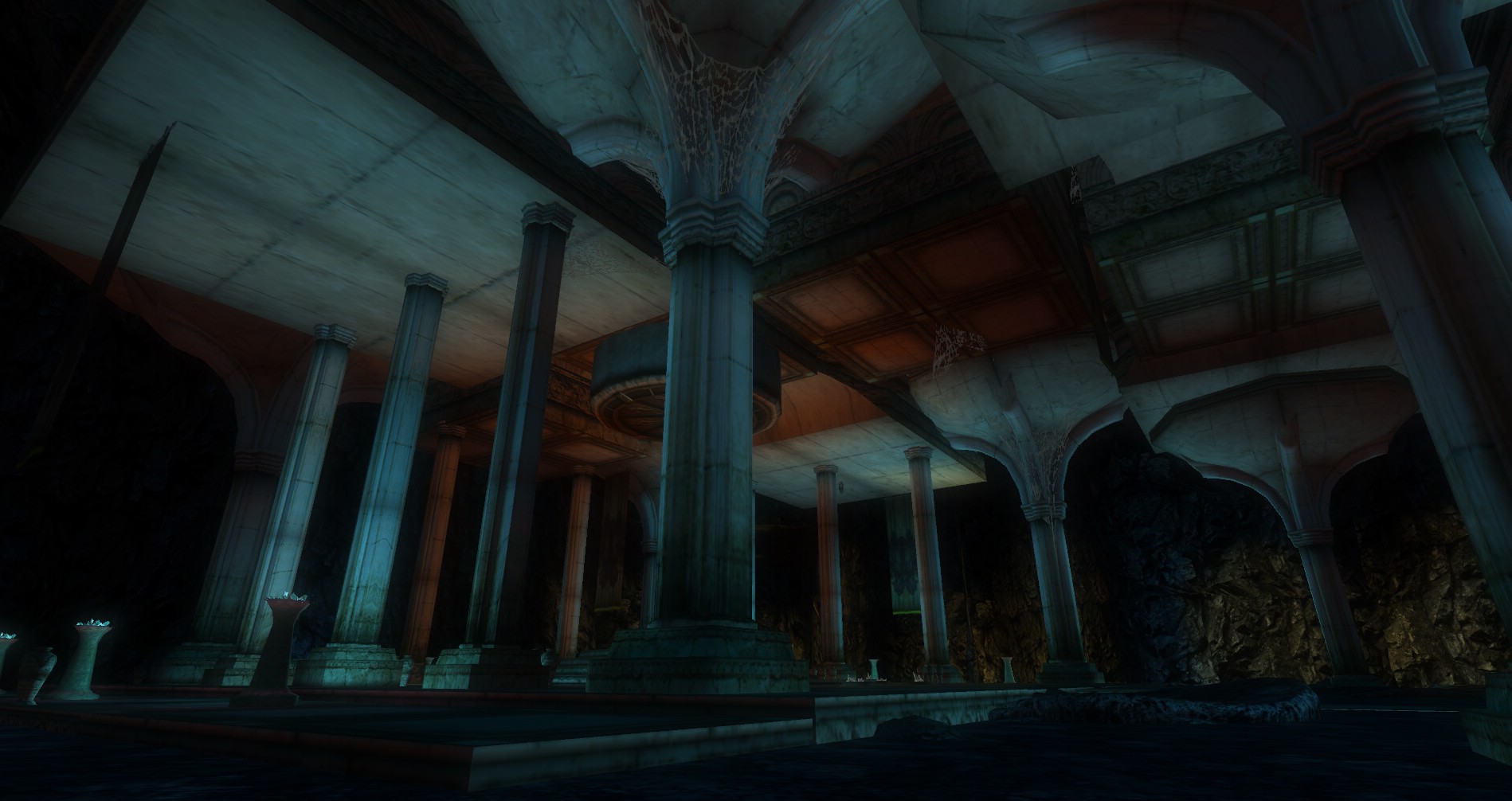 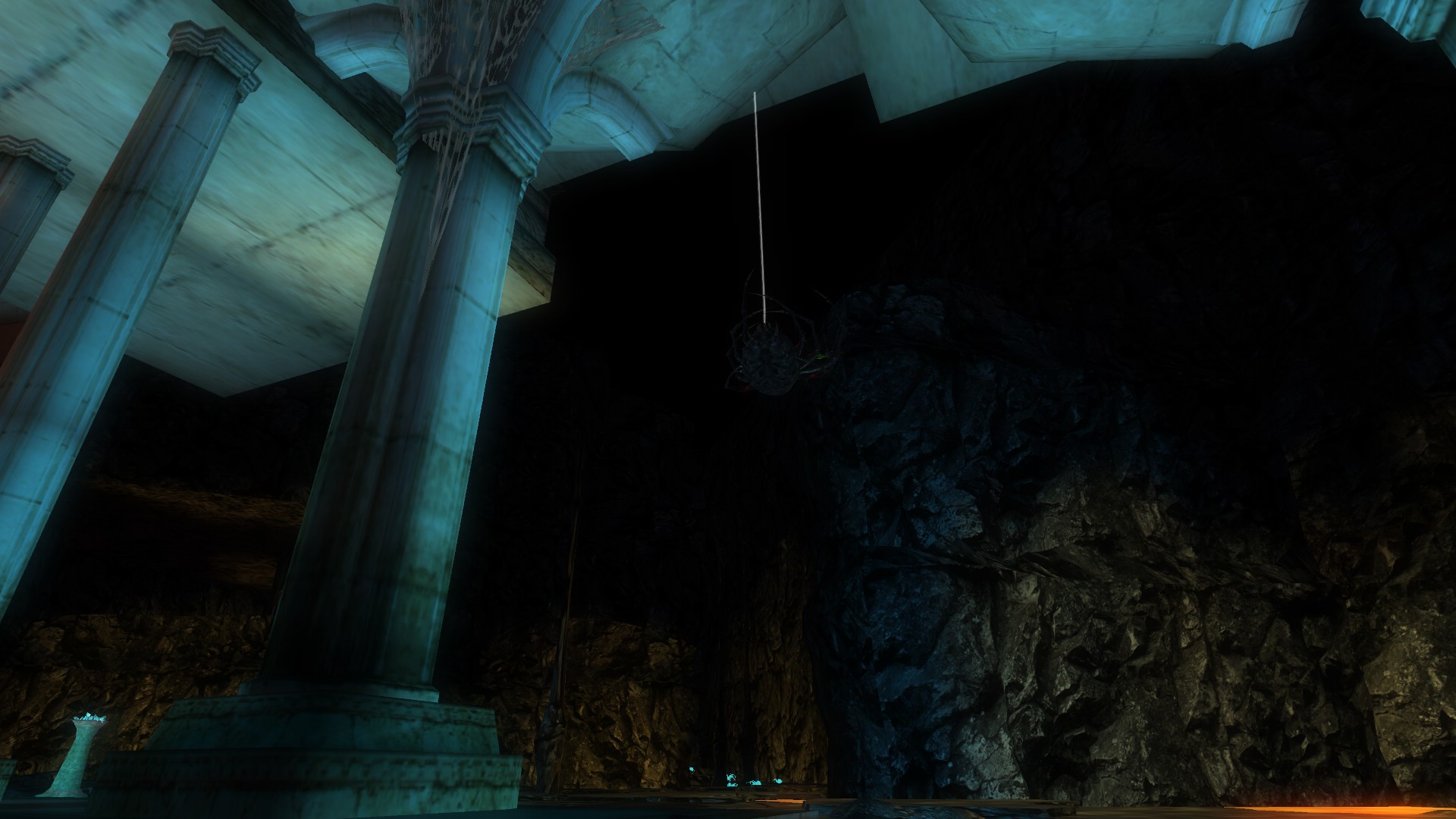 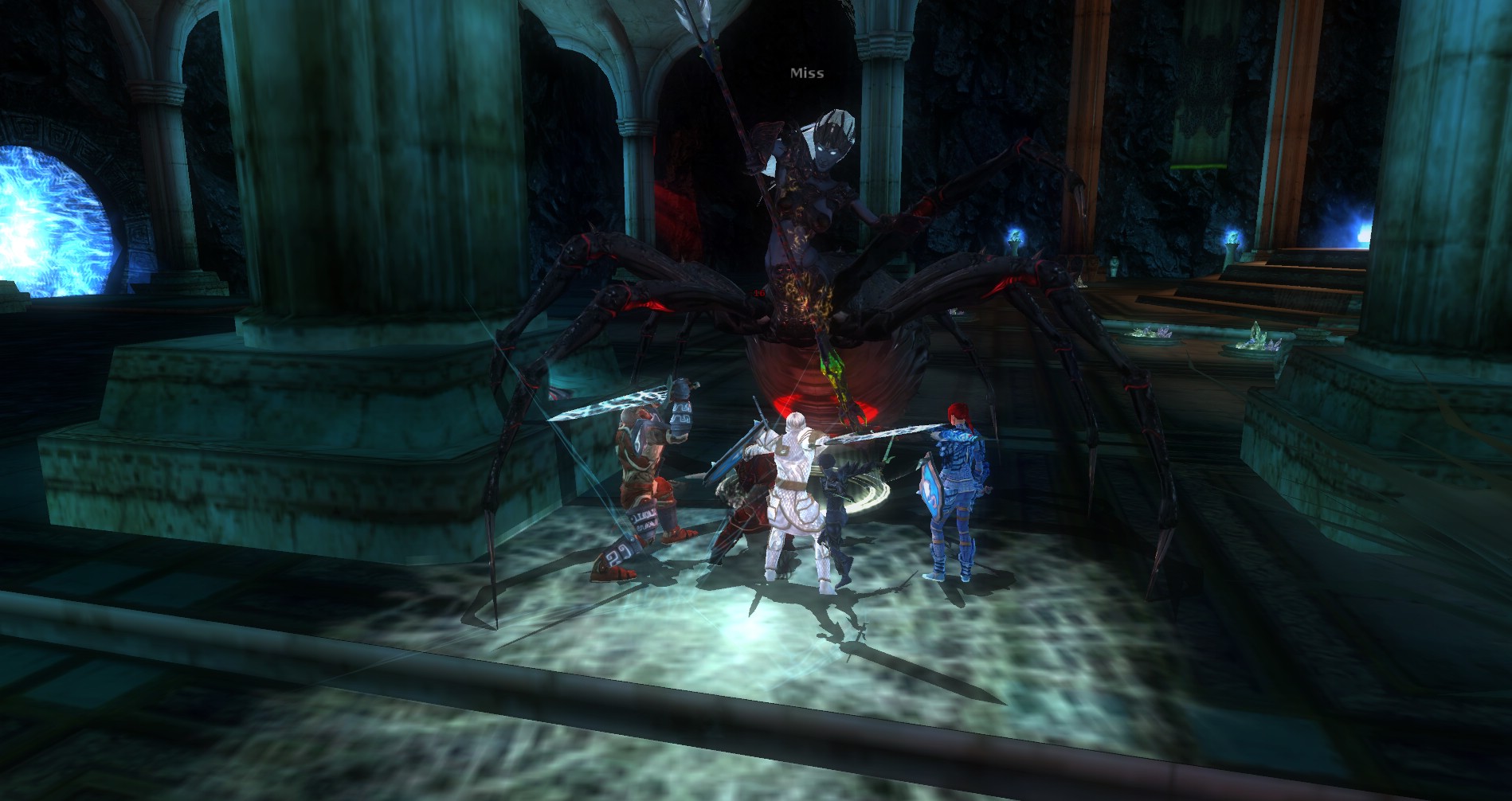 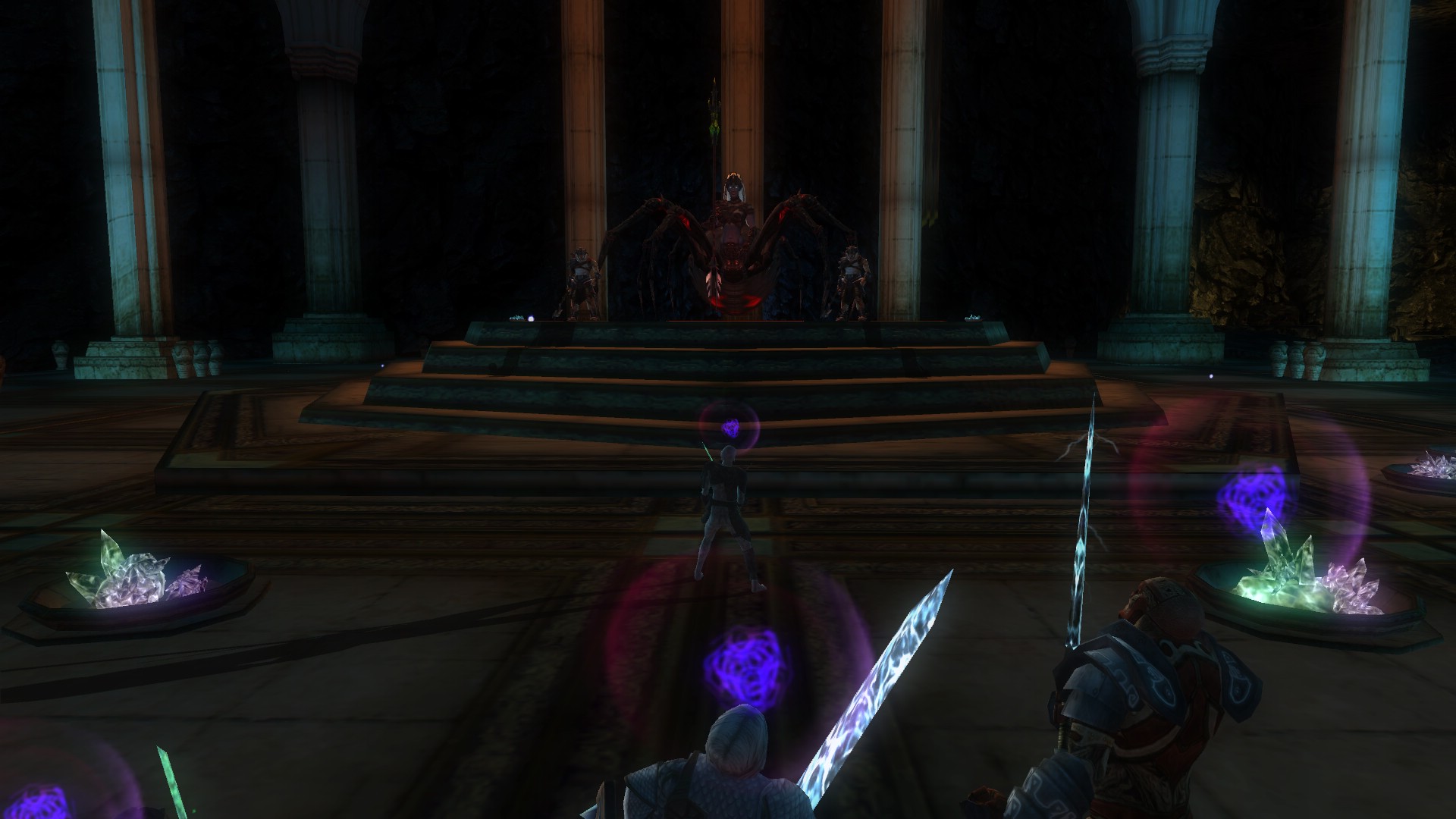 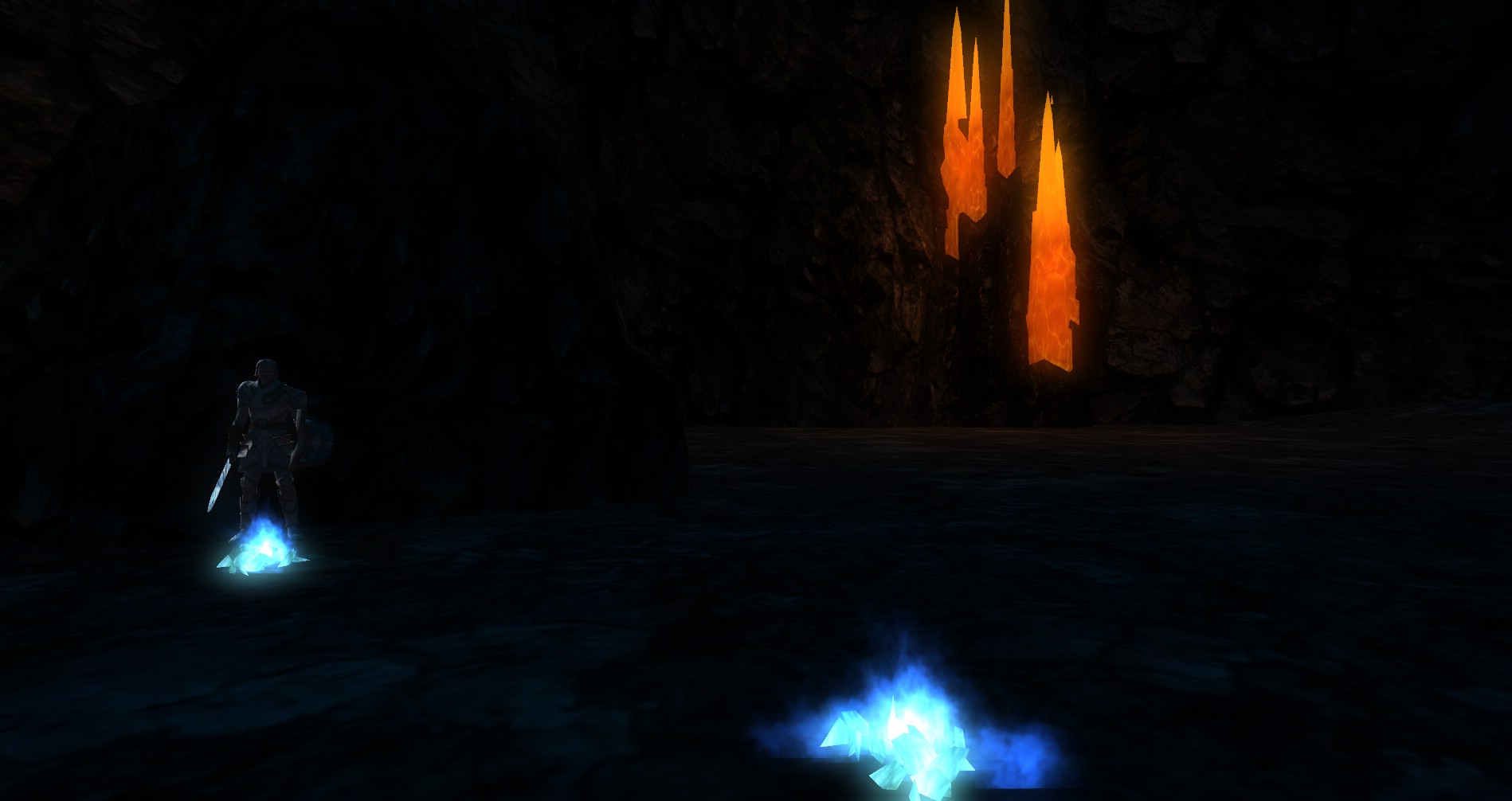 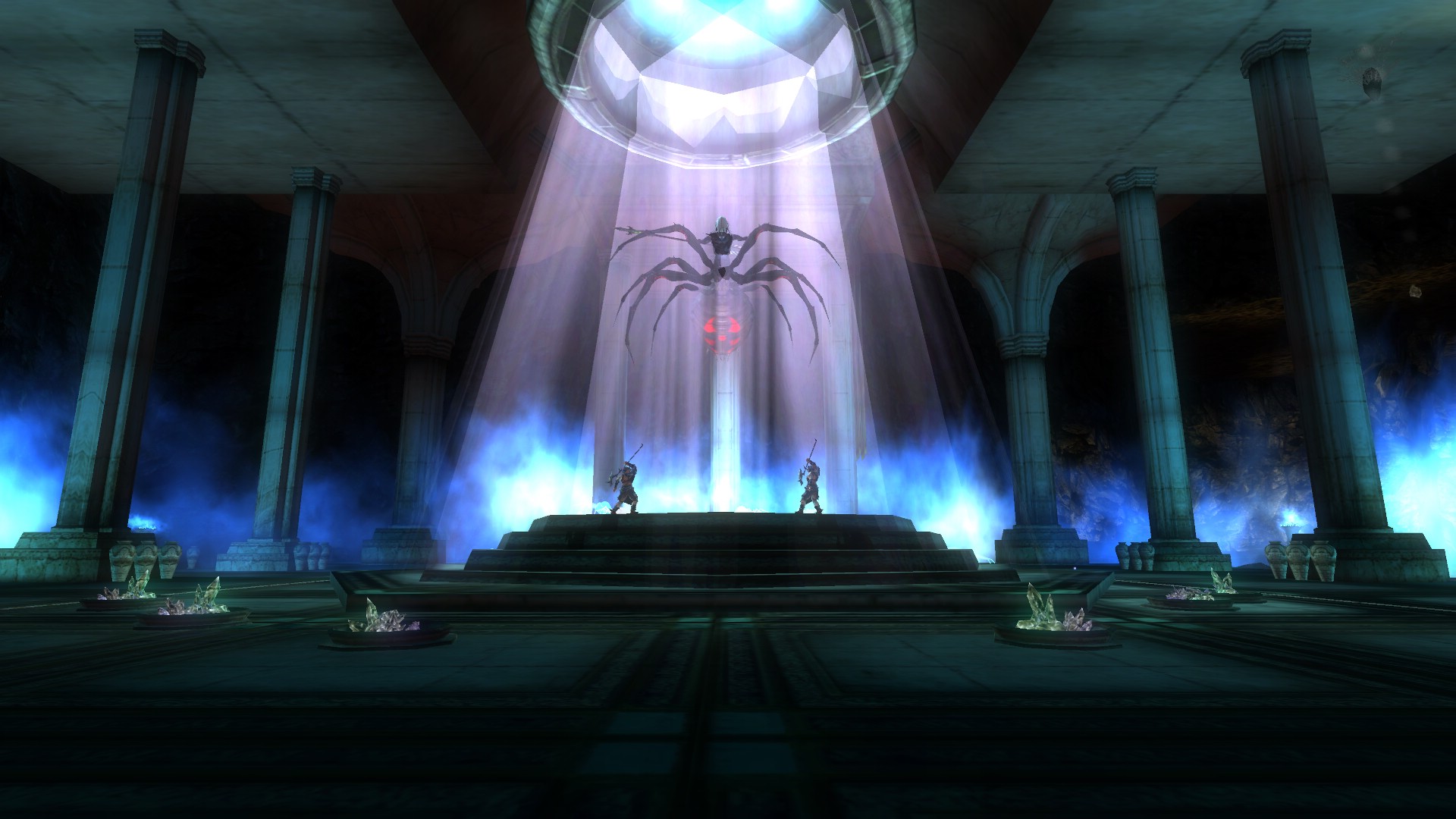 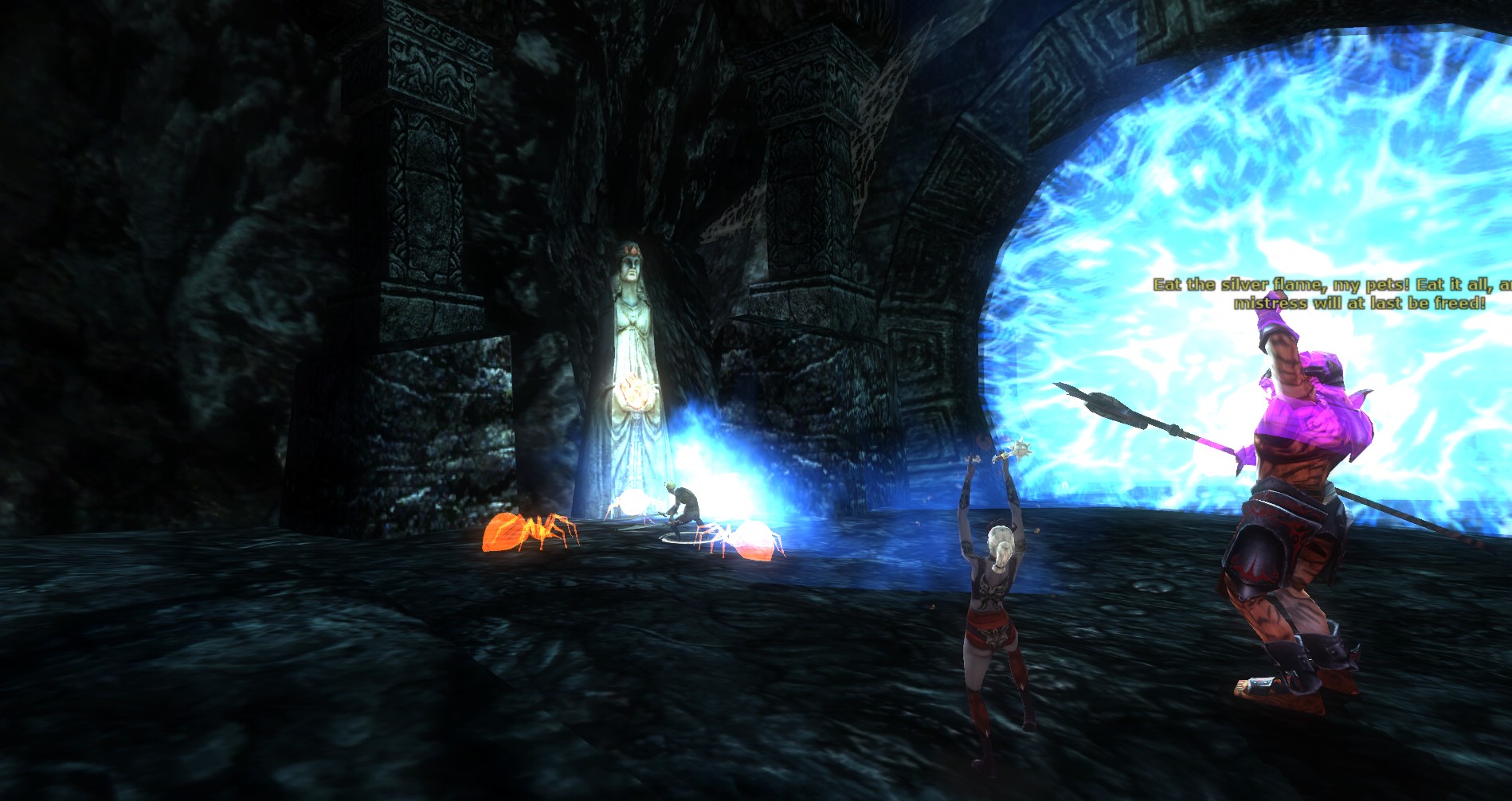 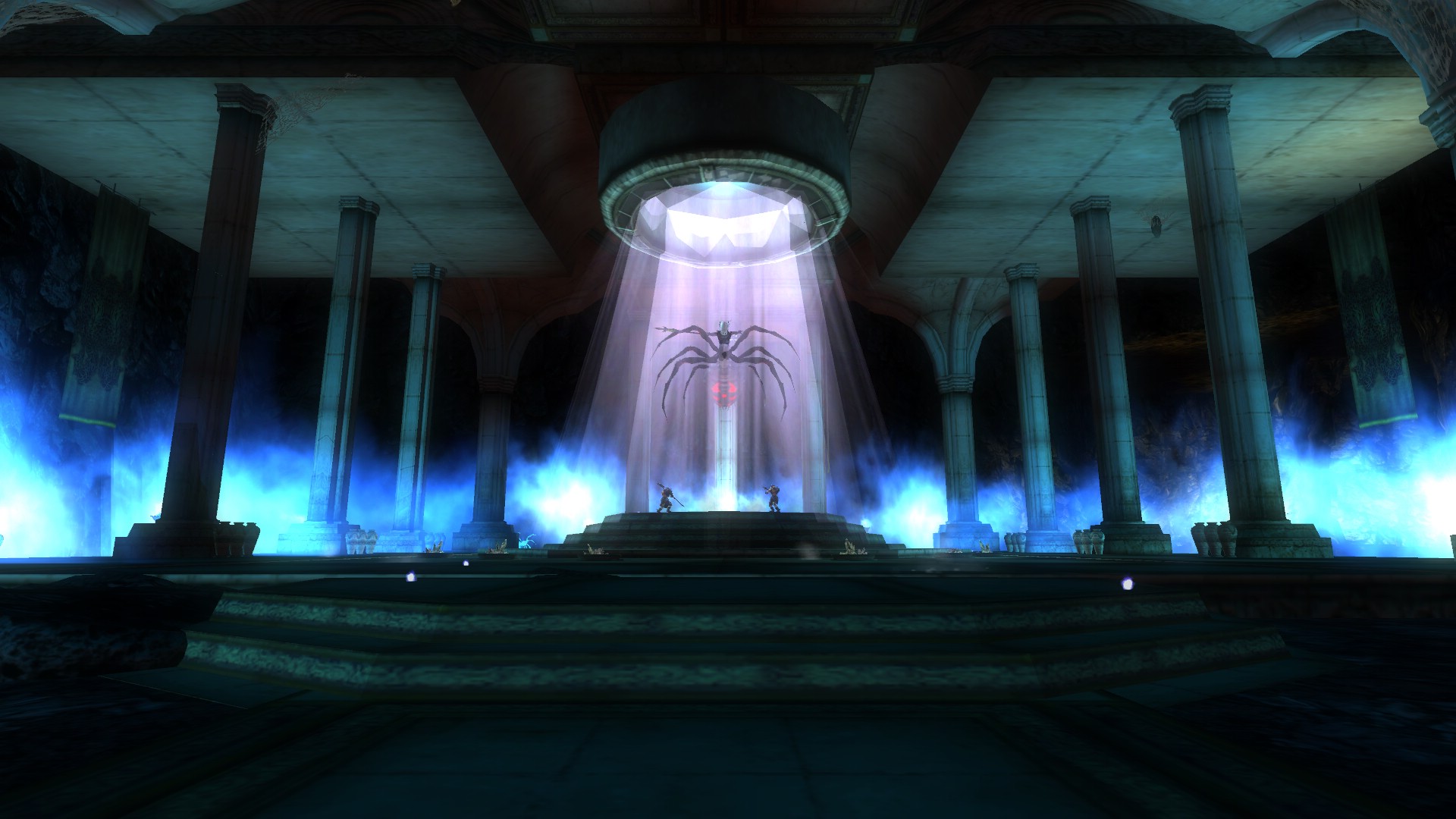 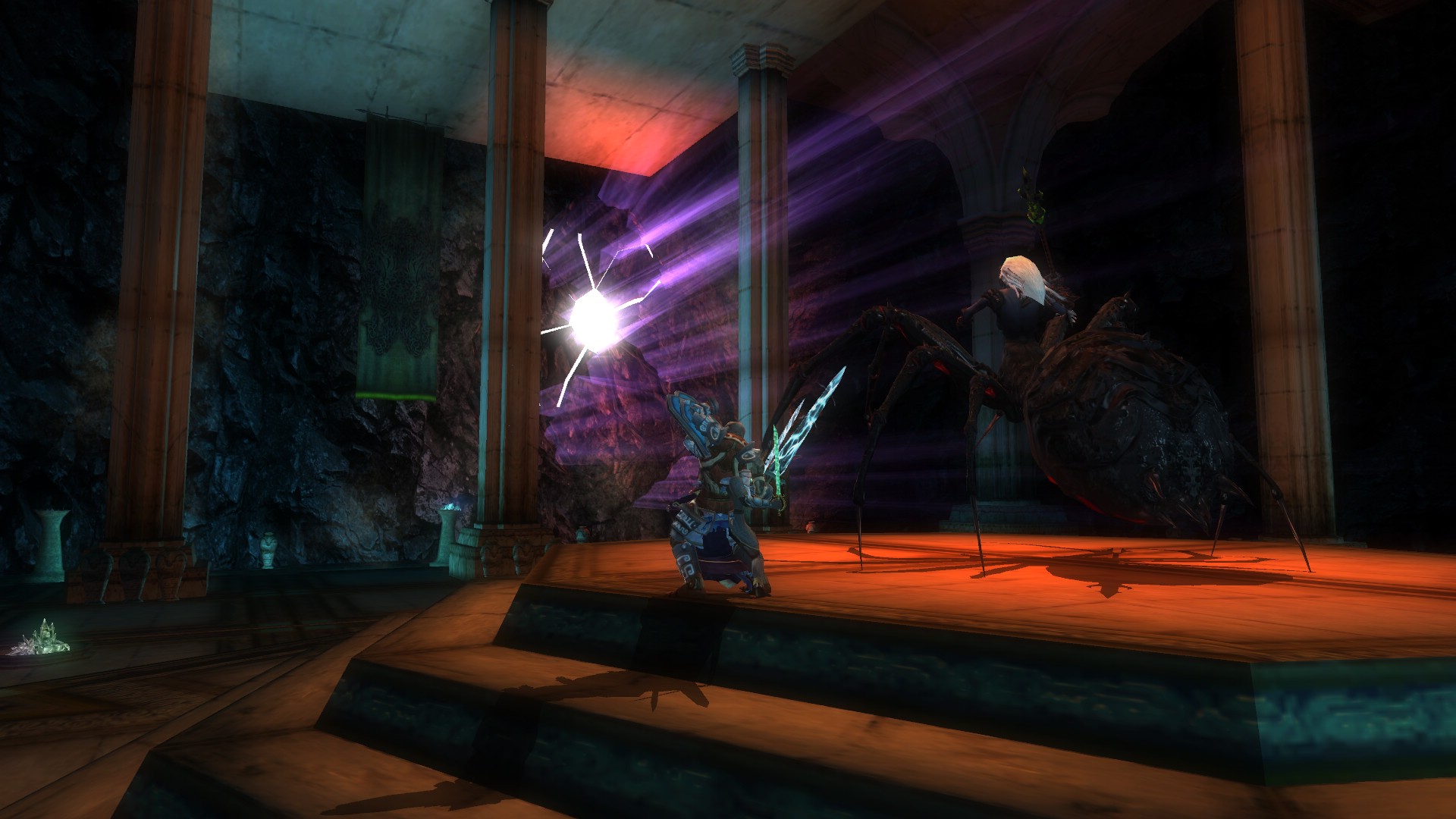 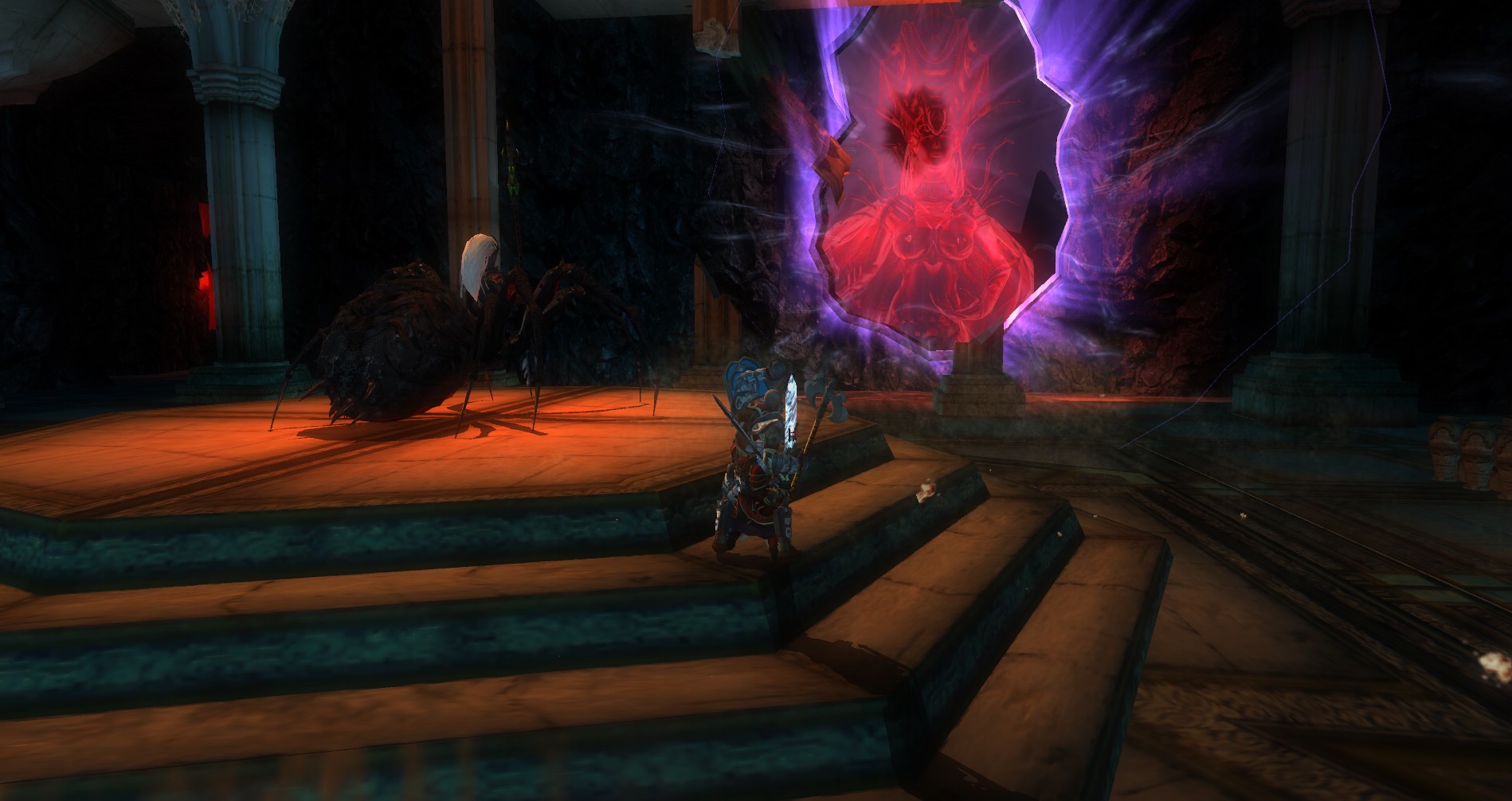 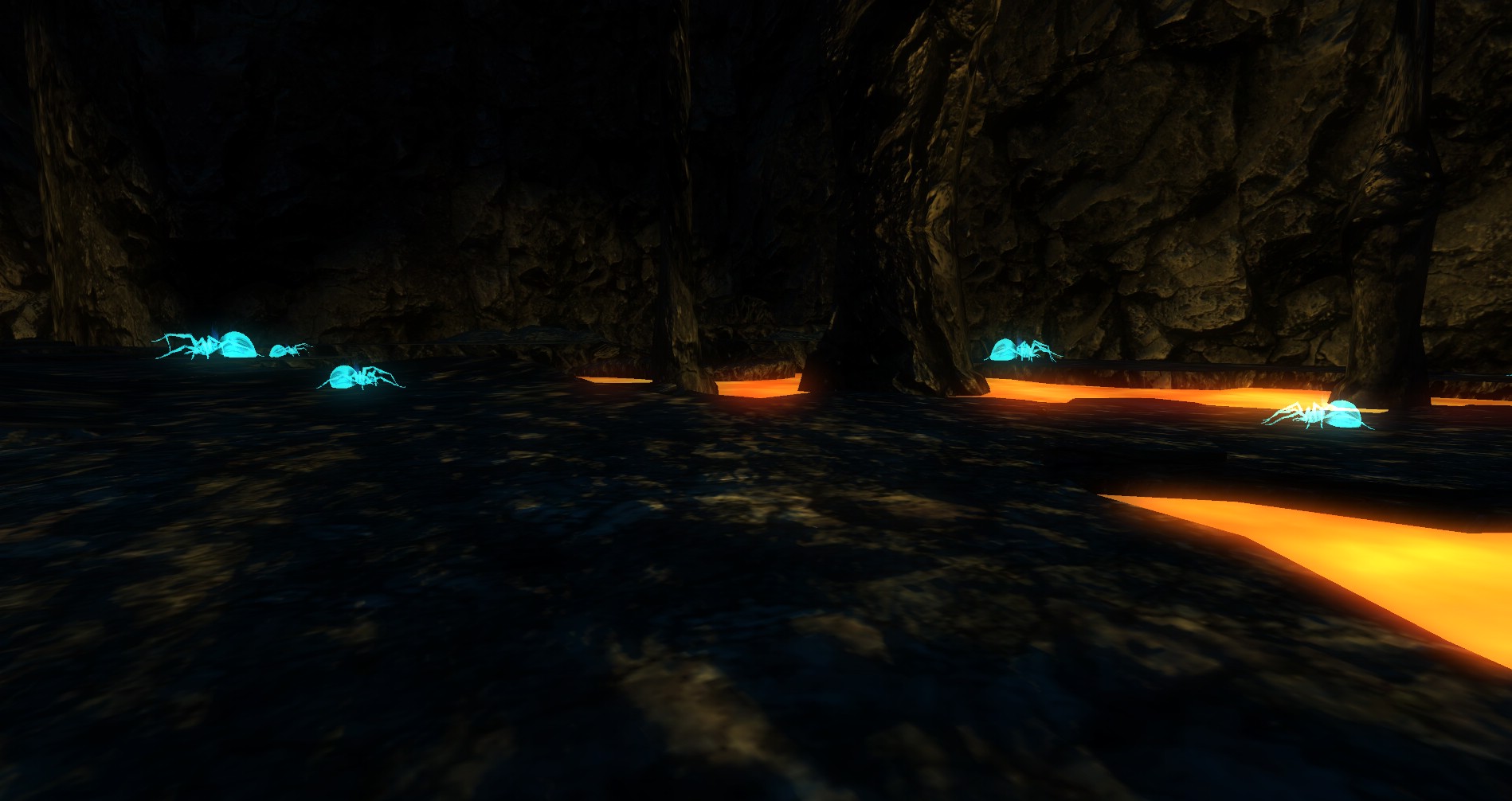 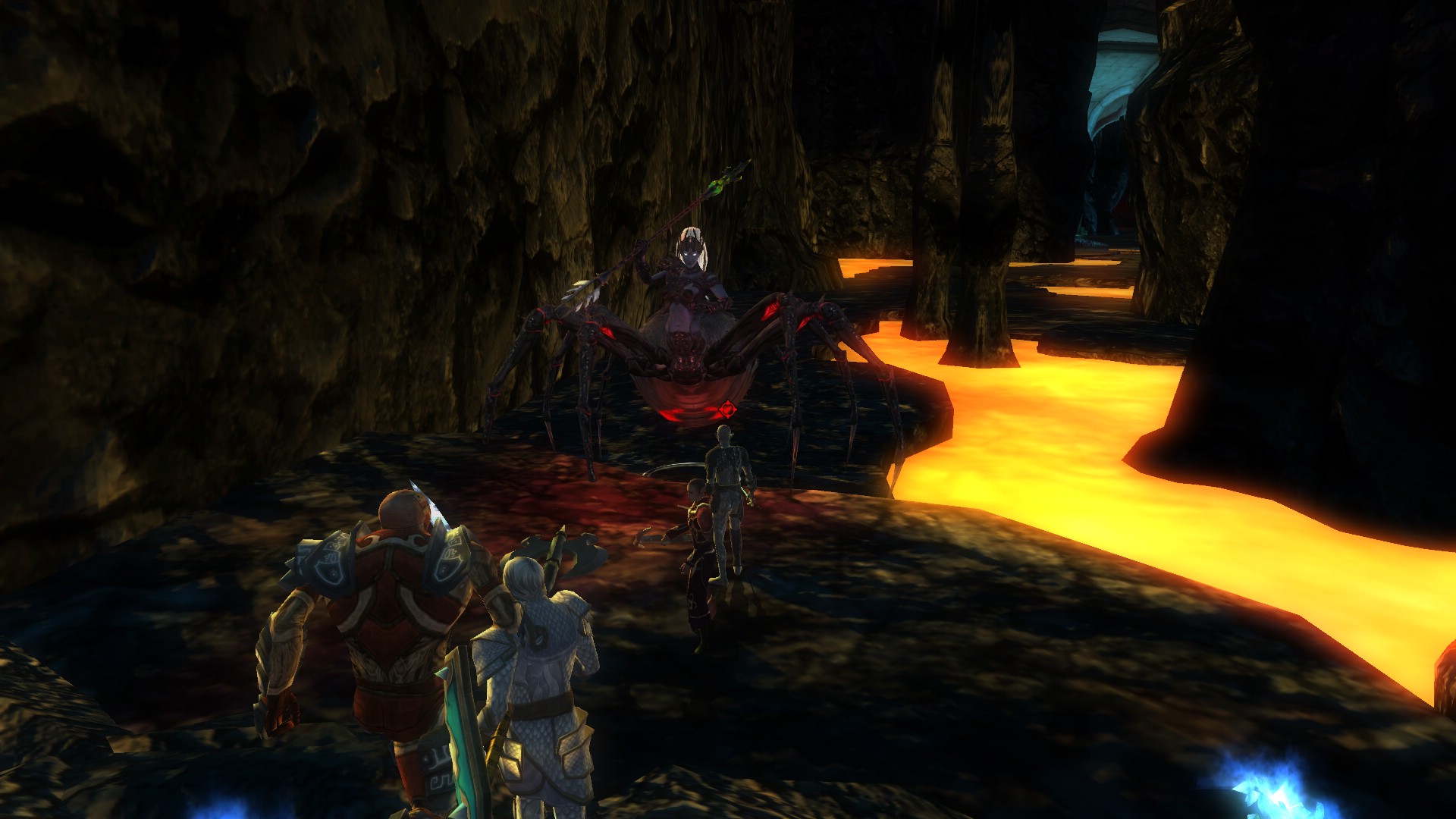 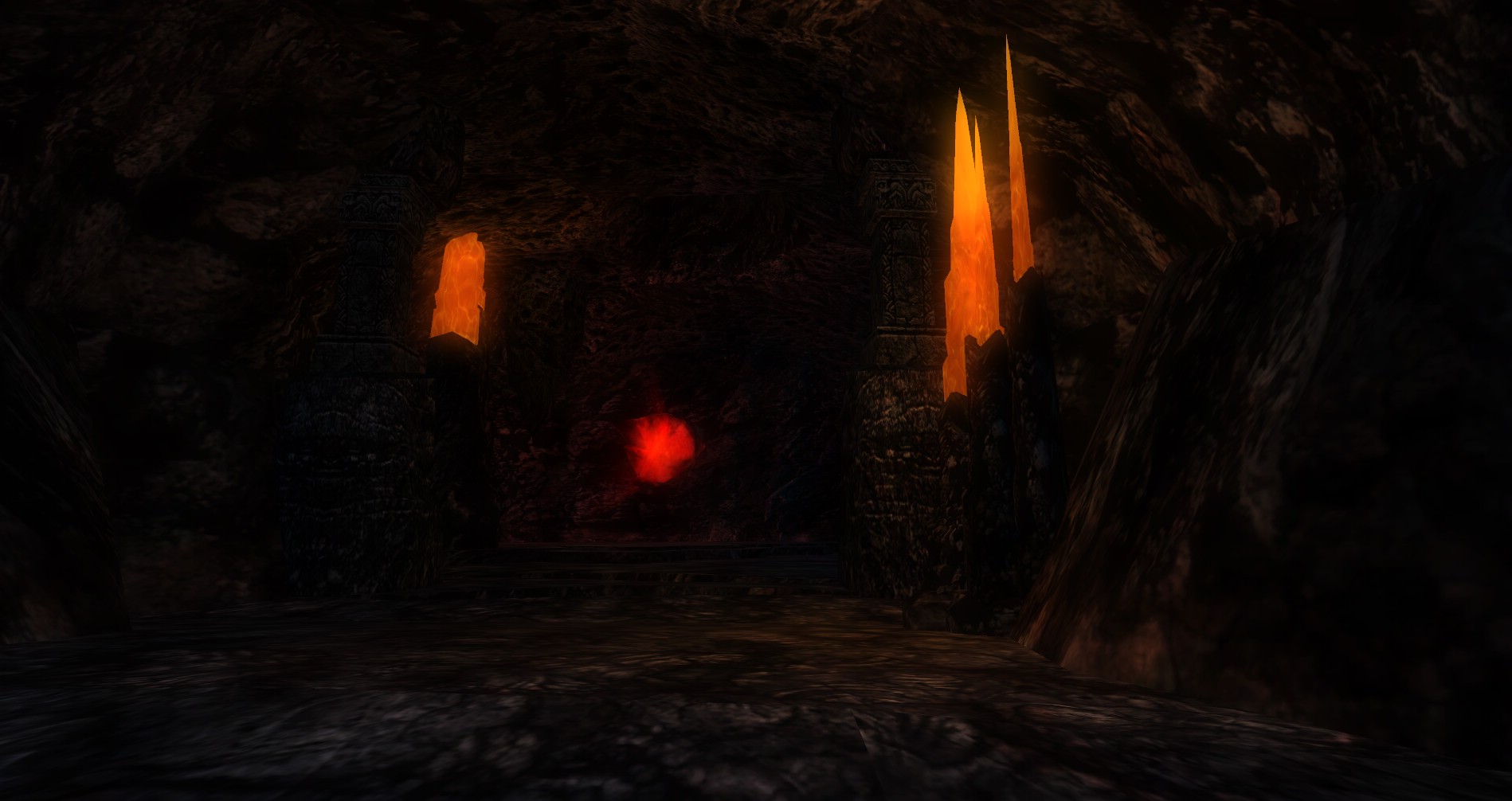 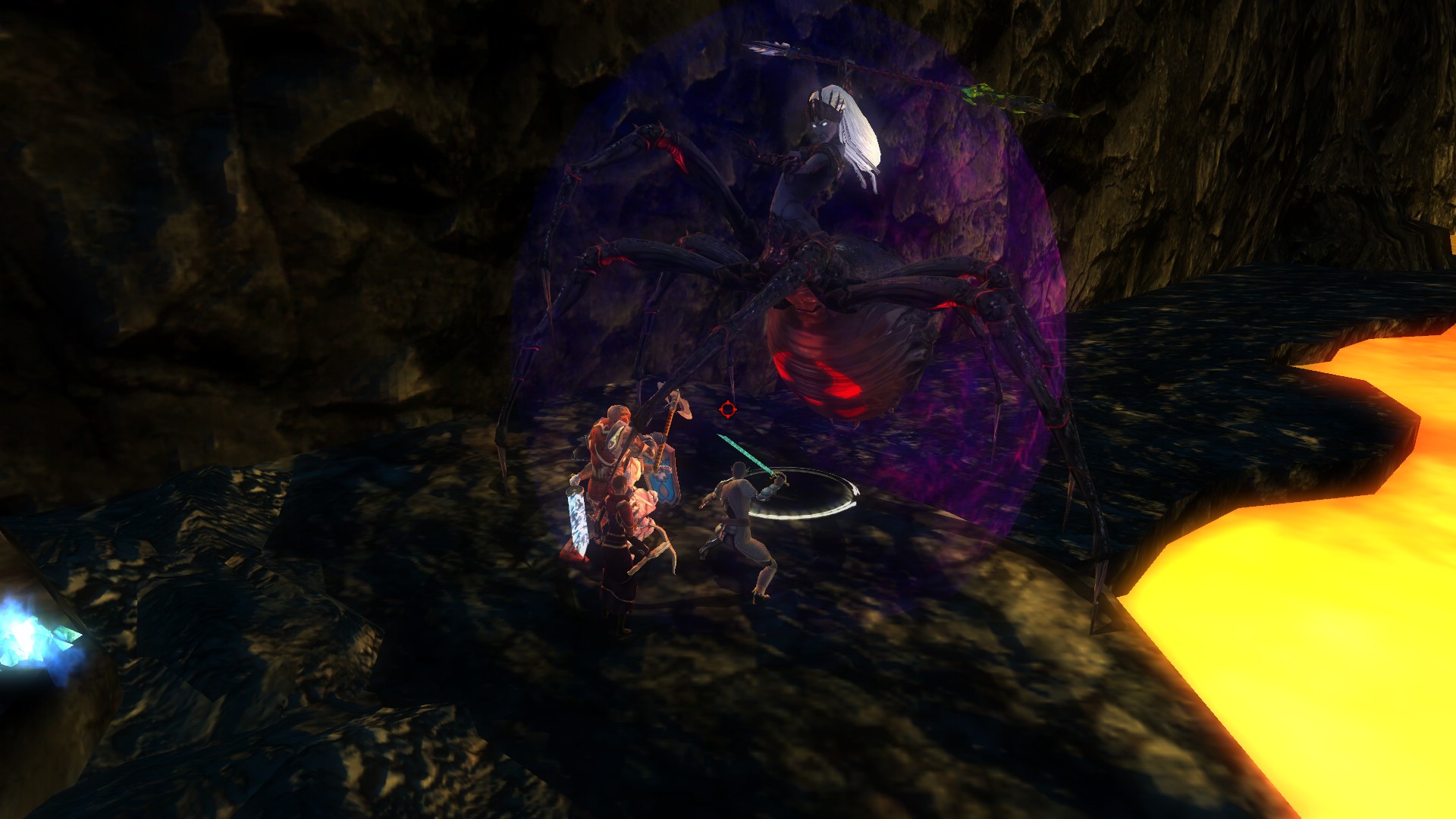 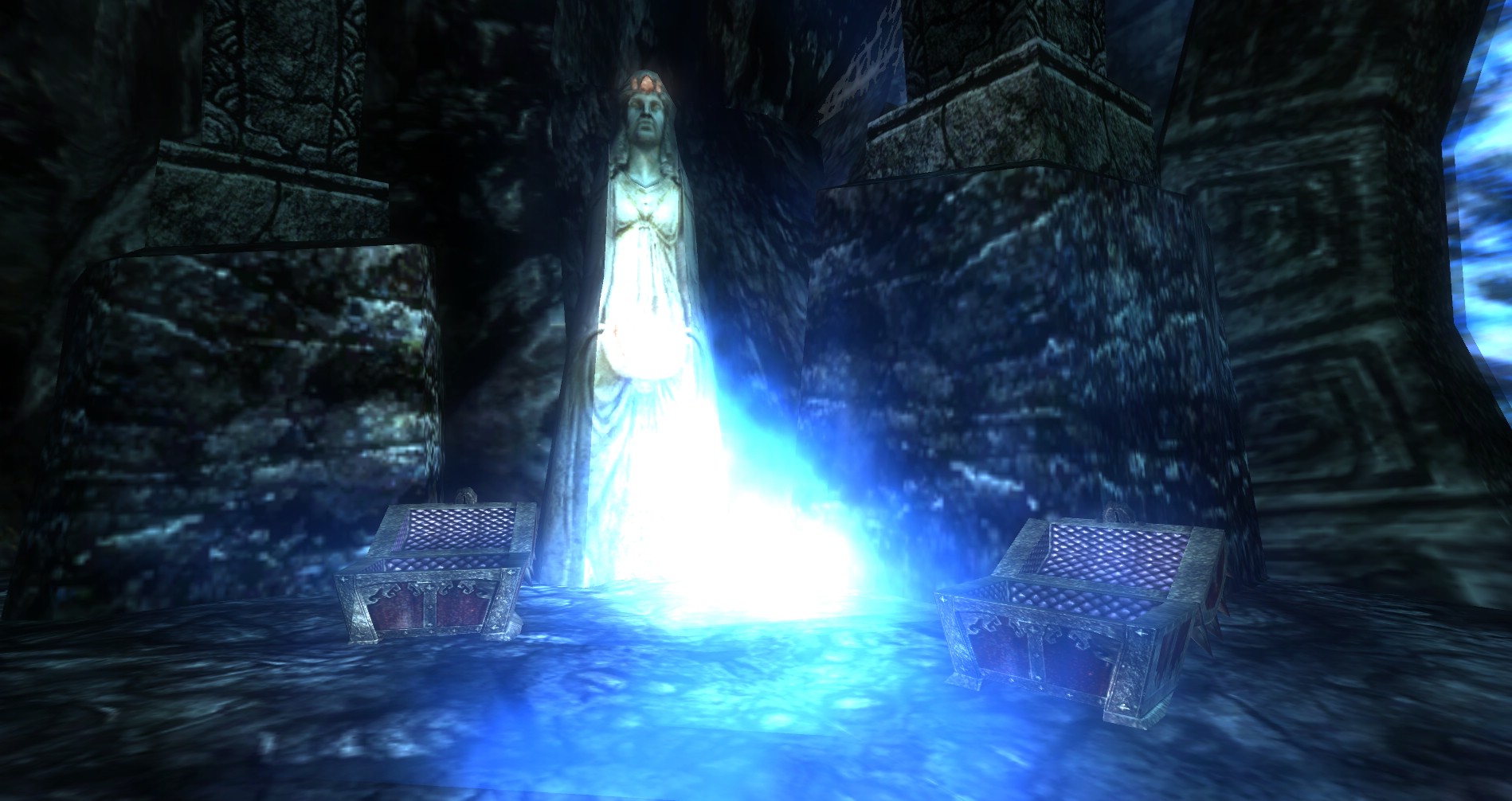 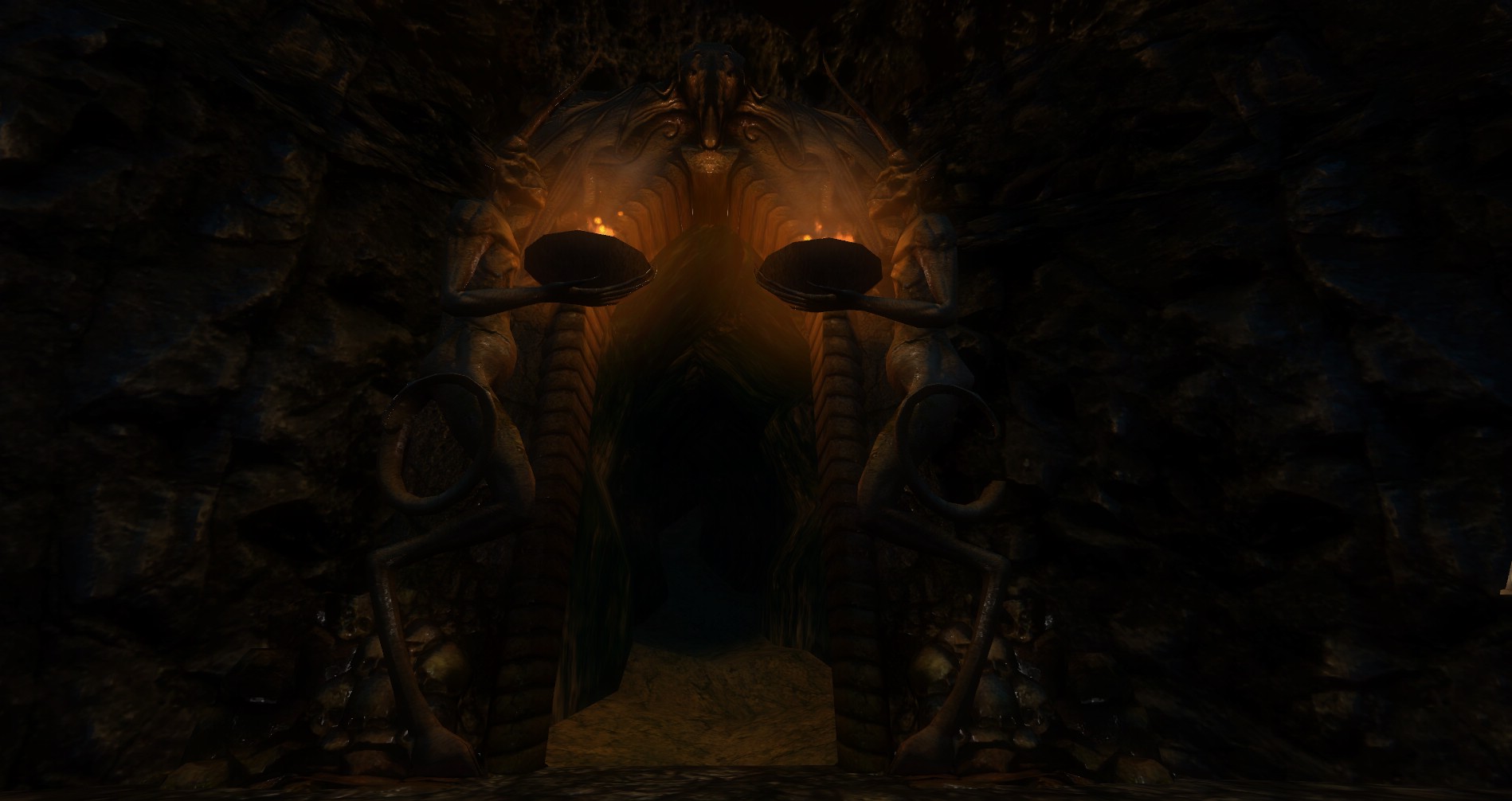 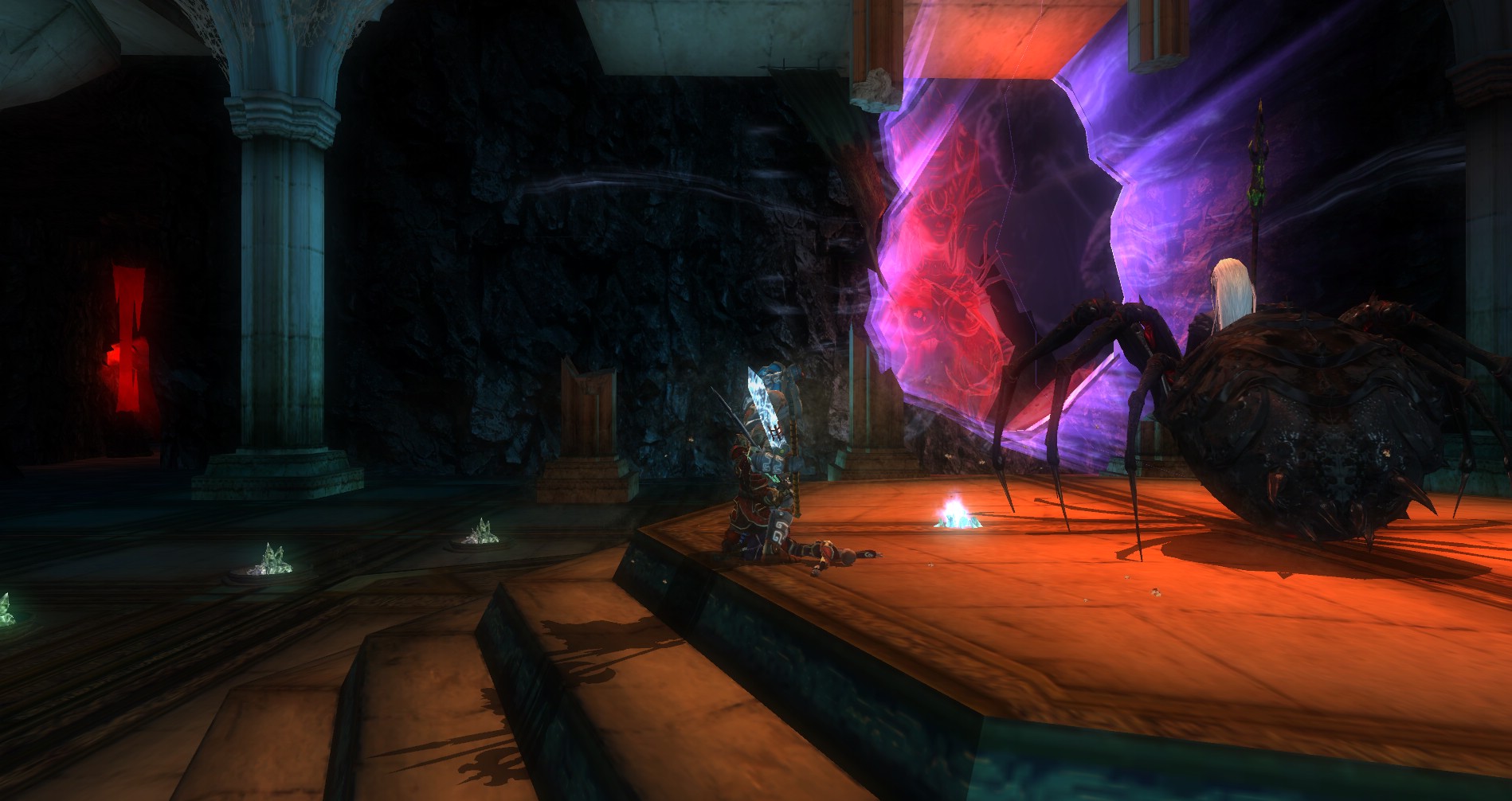 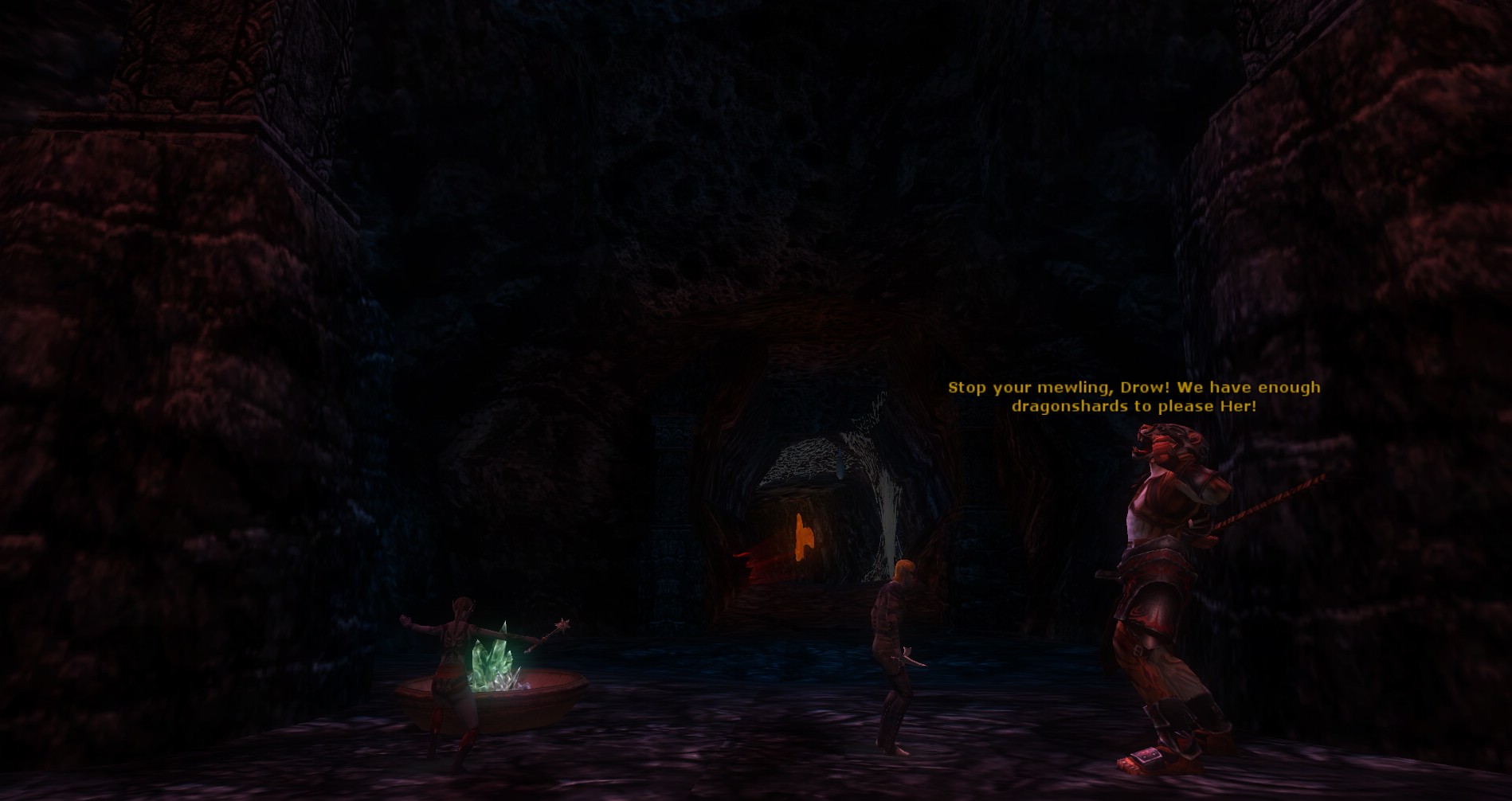 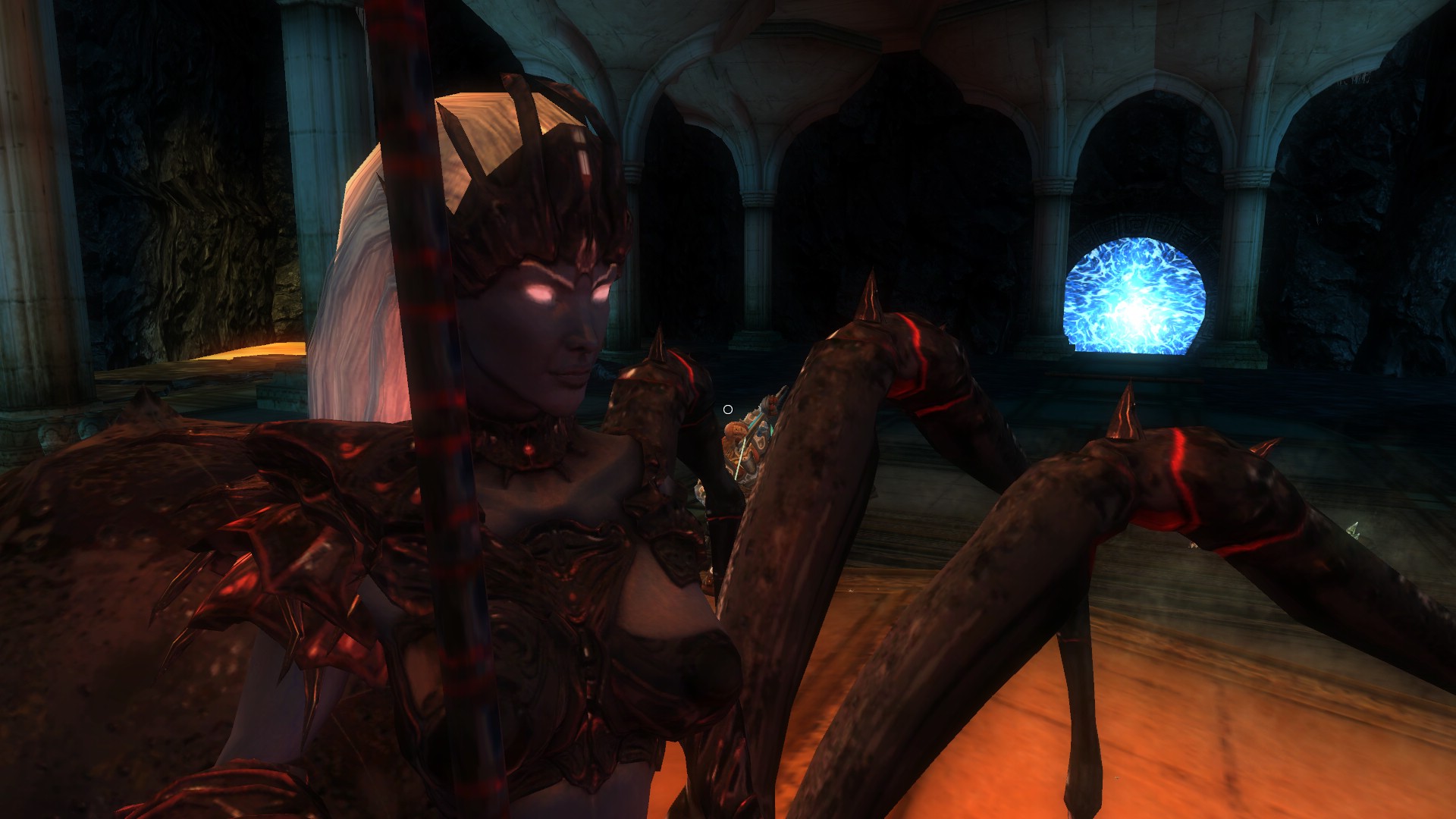 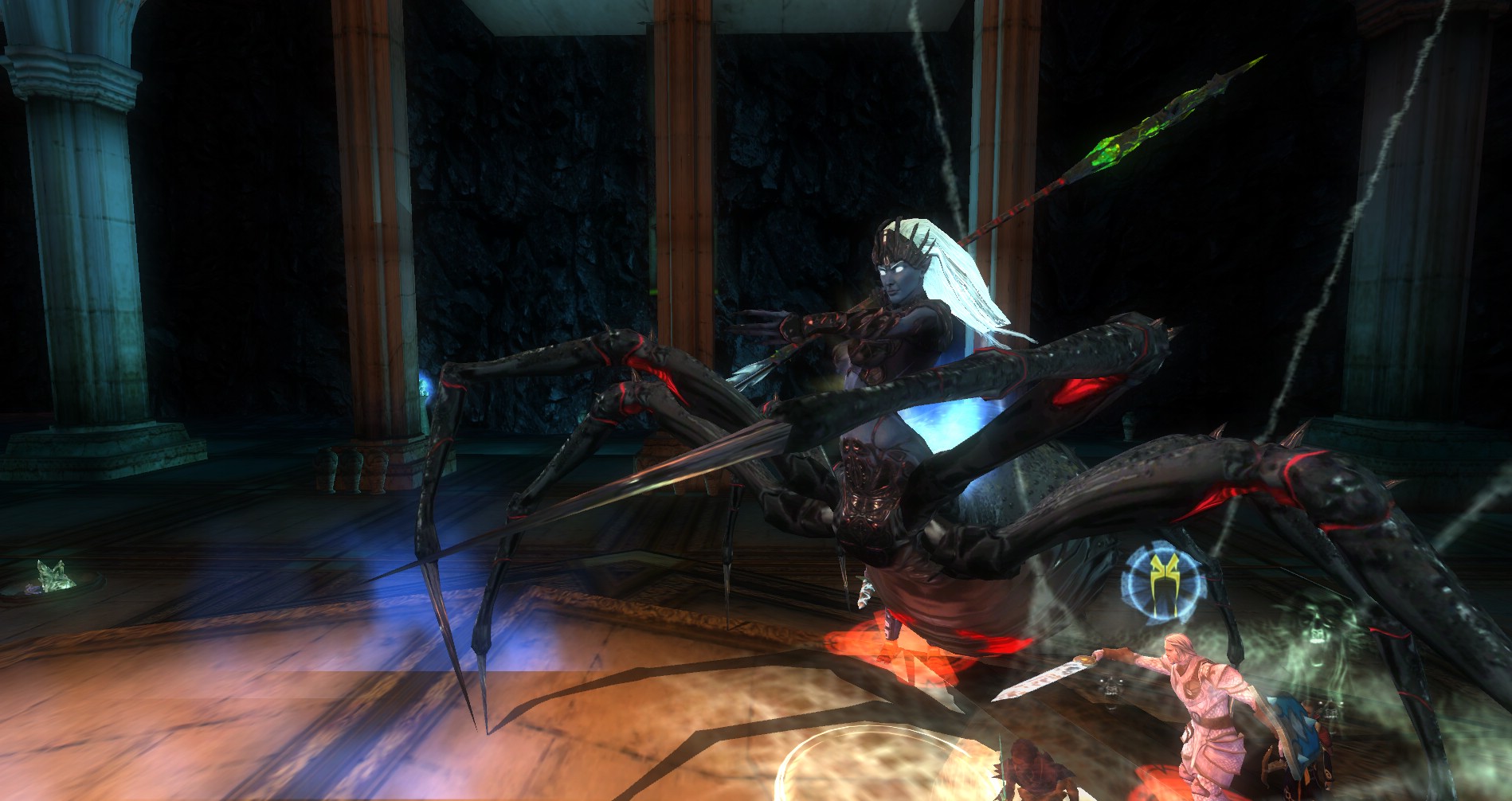 Once you zone in, summon your pets and hirelings if you want them. Then buff the whole group.  Make sure that everyone in the group gets Deathward, Freedom of Movement, and Fire Resistance. Spell Resistance is also another good one here along with Neutralize Poison.

Decide on the kind of tactics you want to use here. I would suggest splitting the party into a couple of  different roles.

You might also want to take a moment to figure out who is going to kite the Spinner of Shadows. Kiting means attacking her and getting her to chase you around. You will probably need someone to do damage and then someone to heal the kiter.

The rest of the group should plan on heading out and slaughtering the Silver Flame Eaters to collect the essences to relight the pillars.

Once your jobs are figured out, get a move on!

Corridor to the Prison

Make sure you have your plan in place and then talk to the Silver Flame Guardian to send you inside.

Prison of the Spinner of Shadows

The prison for the Spinner of Shadows is quite large and there is much Silver Flame magic put in place to keep her held. As you enter, you’ll see that the Rakshasas have beaten you here and have set loose a torrent of spiders that devour the Silver Flame magic! Taking the magic from the prison weakens the bonds that holds the Spinner of Shadows and she soon breaks free! Her mere presence is awe inspiring and freezes you in place.

Now that you are too late to stop them from releasing her, your only chance is to force her back into the prison before she regains too much of her strength.

Battling the Spinner of Shadow and the Flame Eaters

This battle is much more like a raid fight than like a standard quest boss battle. There is a series of waves that you will need to contend with.

First, send your spider hunting team(s) off to start slaughtering spiders. Leave your kiting group in the middle. The Spinner of Shadows is hiding up in the ceiling for now but she will be down soon.

It’s good to know that the Aura from the Silver Flame Guardian will slowly heal you as well as remove any poison affects you have. Keep this in mind if you need some assistance. This is something very handy for the kiter to use.

Round One with the Spinner of Shadows

Once she drops down, have your kiter beat on her or blast her until she summons more spiders, then you can start kiting her around.

The spider hunters need to gather up as many as they can. If you notice that you are running out of spiders, make sure that you are doing enough damage to the Spinner of Shadows or the Flame Eaters will burrow underground.

If you hurt the Spinner of Shadows enough, she will retreat up into the shadows of the ceiling for a few minutes. Stay in the center and keep collecting Silver Flame Essences.

Round Two with the Spinner of Shadows

Round two starts when the Spinner of Shadows calls in reinforcements from the demons of Kyber. Kyber Reavers spawn all over the dungeon. Take these out as you run into them.

When she comes down again, you may need to reestablish agro on here and start kiting. You can also beat her down so she retreats again if everyone is doing well. Make sure the Kyber Reavers and Spiders are taken care of first though, because you do not want to start the next part until you are ready.

Once she goes up again she will change her tactics. This time she will call in swarms of spiders to try to take out the Silver Flame Guardian itself. When you hear this, everyone should run back to the center and protect the Silver Flame Guardian. If you are successful, you will continue to keep its healing and curative aura available for you as well as get an extra chest at the end of the quest. And who doesn’t like extra loot?

Once the Silver Flame Guardian is safe (When you get XP for the optional) head back out for more spider hunting.

Round Three with the Spinner of Shadows

This last and final round, the Spinner of Shadows will be invincible. Do whatever you can to get her agro, then kite her around until the quest is over.

There should not be too many more spiders that need to be killed to complete the lighting of the pillars. If you are split up, call out counts on how many each person has. Do some trading if needed and get those pillars lit. Make sure to communicate who has how many and what needs to be done. It is easy to keep fighting when the group has enough to finish. No need to waste time or energy by not talking to your group mates.

The longer this quest takes, the harder it gets as people just simply get worn down. With a well-coordinated group you can blast through this quest quickly and easily. Just make sure everyone is on the same page and working together.

Once you get all the pillars lit, the quest will be effectively over. You can enjoy the fruits of your labor with a little cut scene… that totally sticks it to you.

But you know, sometimes DM’s have to do that to drive their story further. Even though you didn’t accomplish what needed to be done, you got some loot and XP out of it, right? Besides, completing this will flag you for access to travel to a whole different world on a quest to set right what you failed to stop here today. Now doesn’t THAT sound like fun?