It seems there is another strange turn of events in Eveningstar. There is a ranger’s house on the outskirts of Eveningstar with some very strange things happening within. Rumors tell of the house being completely overgrown with vegetation both inside and out. After dealing with Peron Uthe in the Eveningstar War Hospital, it appears his affliction may be caused by the same thing that is happening in his house. Perhaps more clues to this mystery can be discovered and this strange threat to Eveningstar can be stopped. 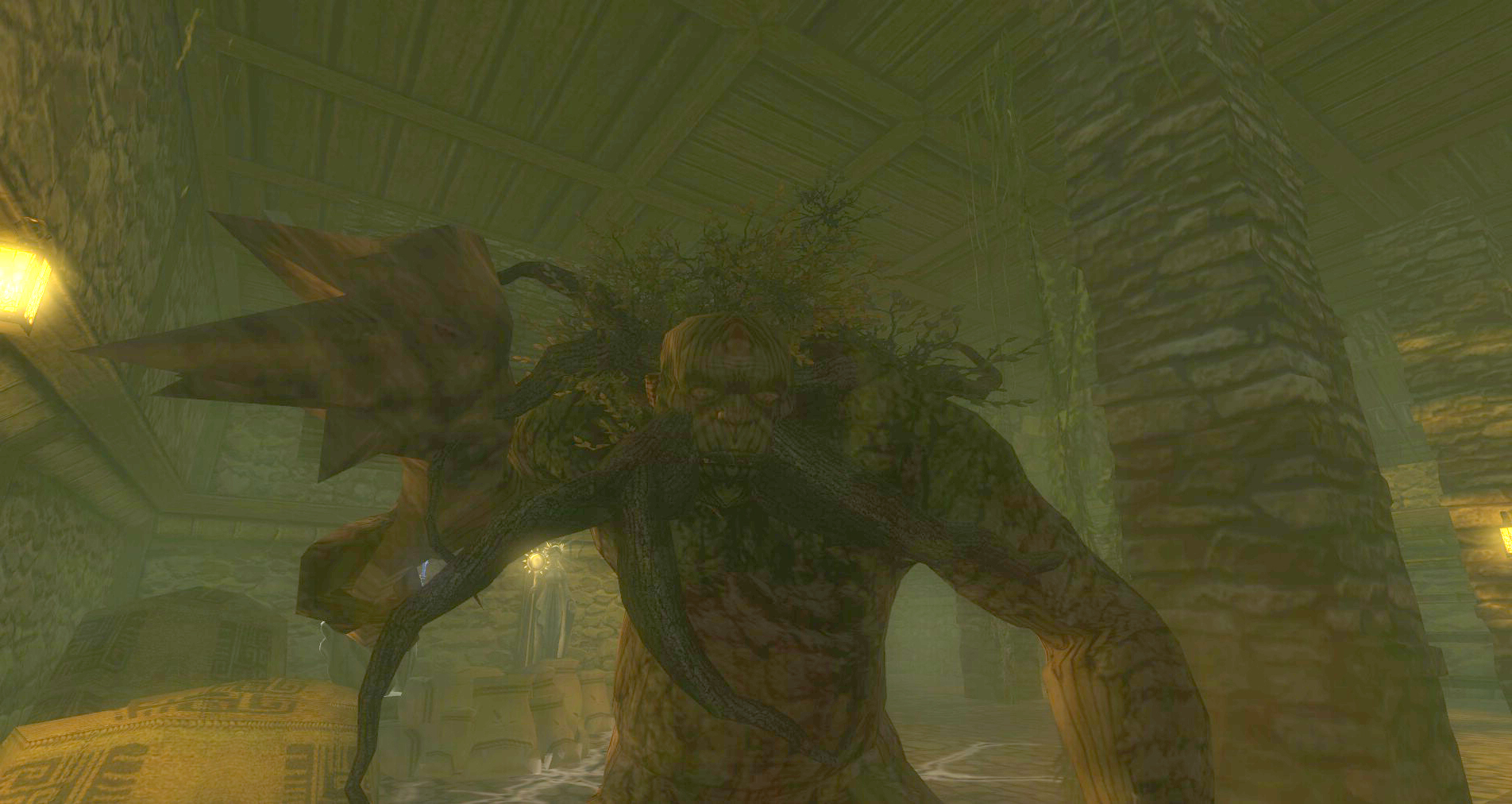 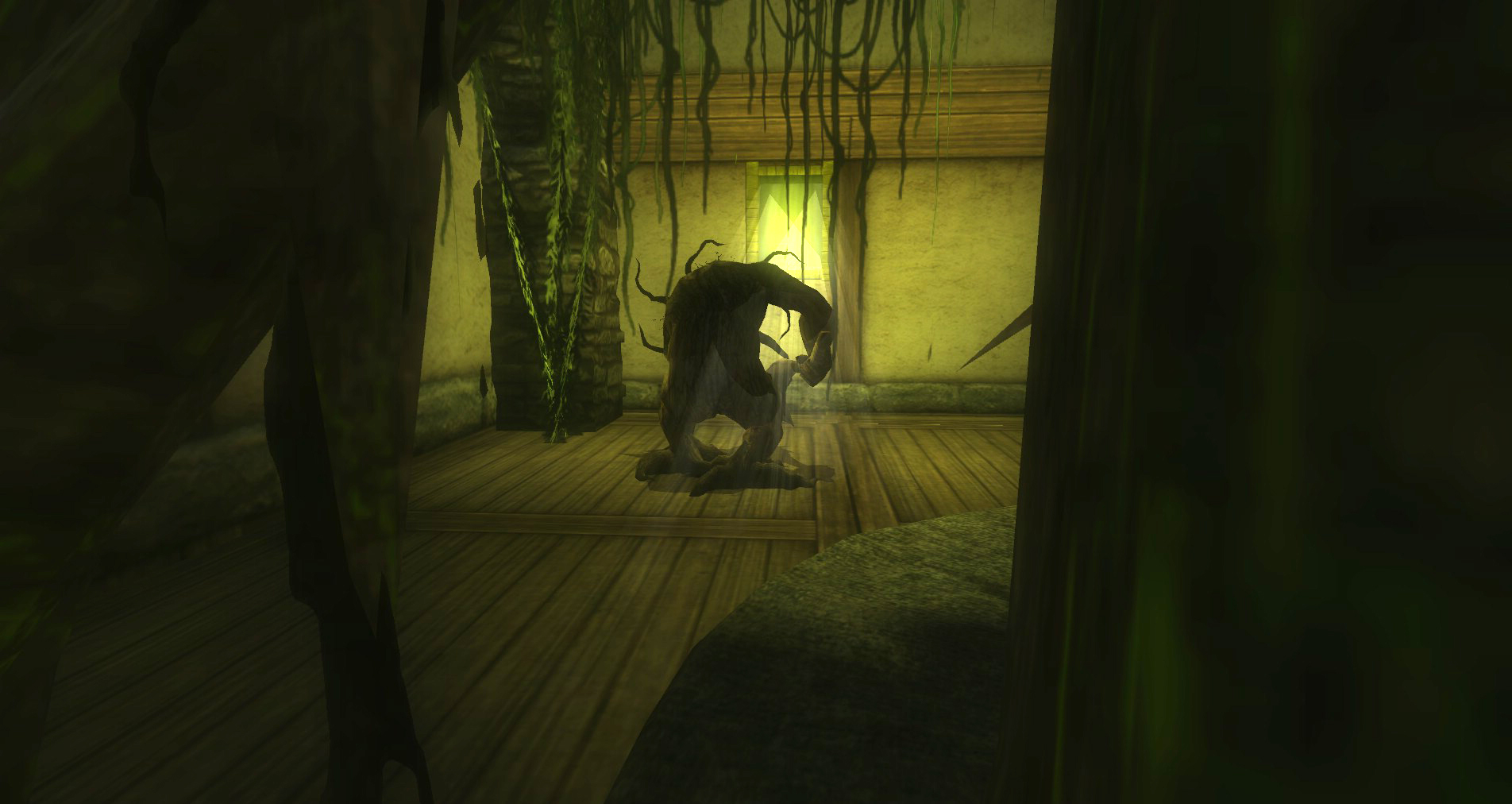 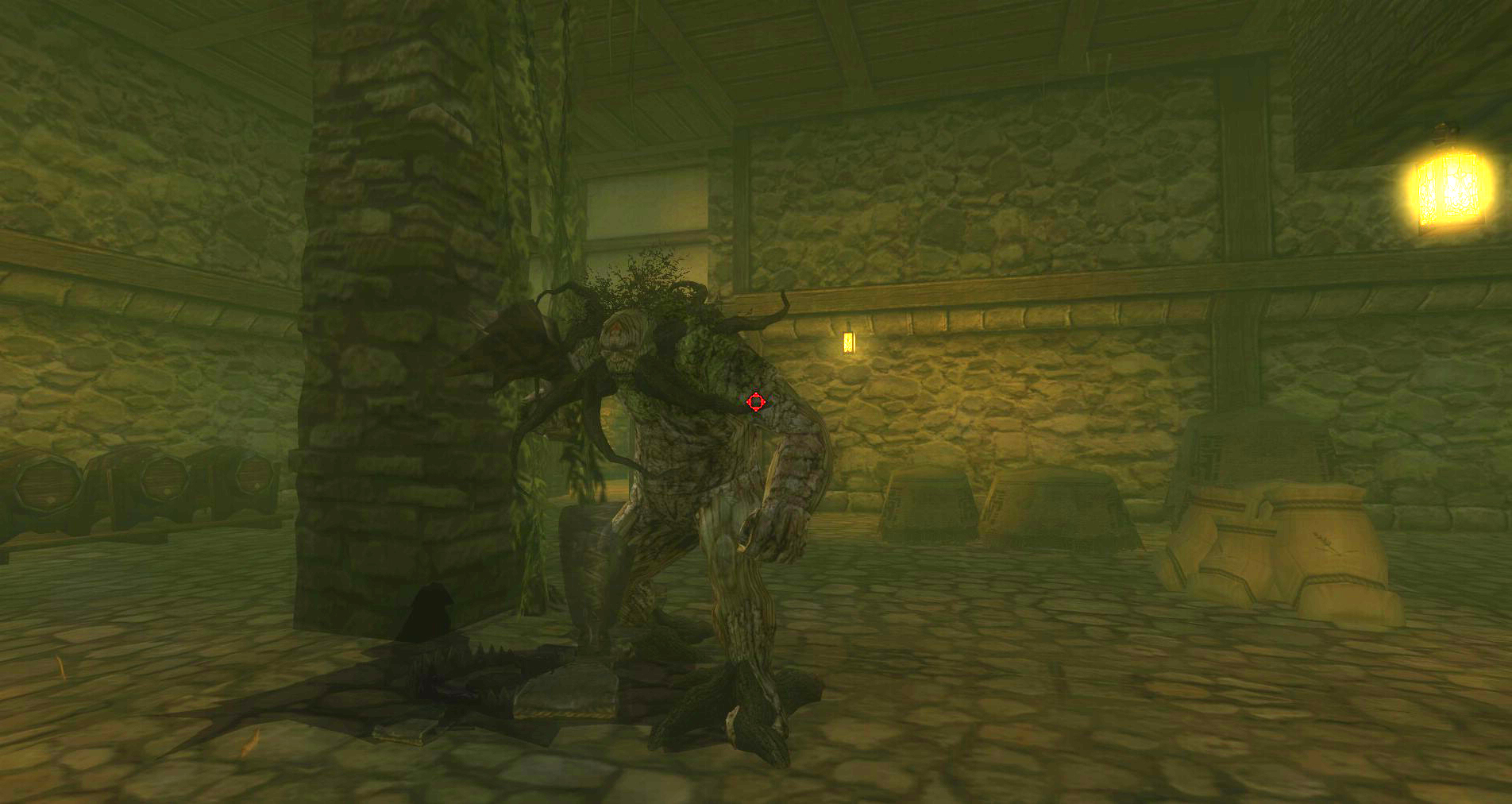 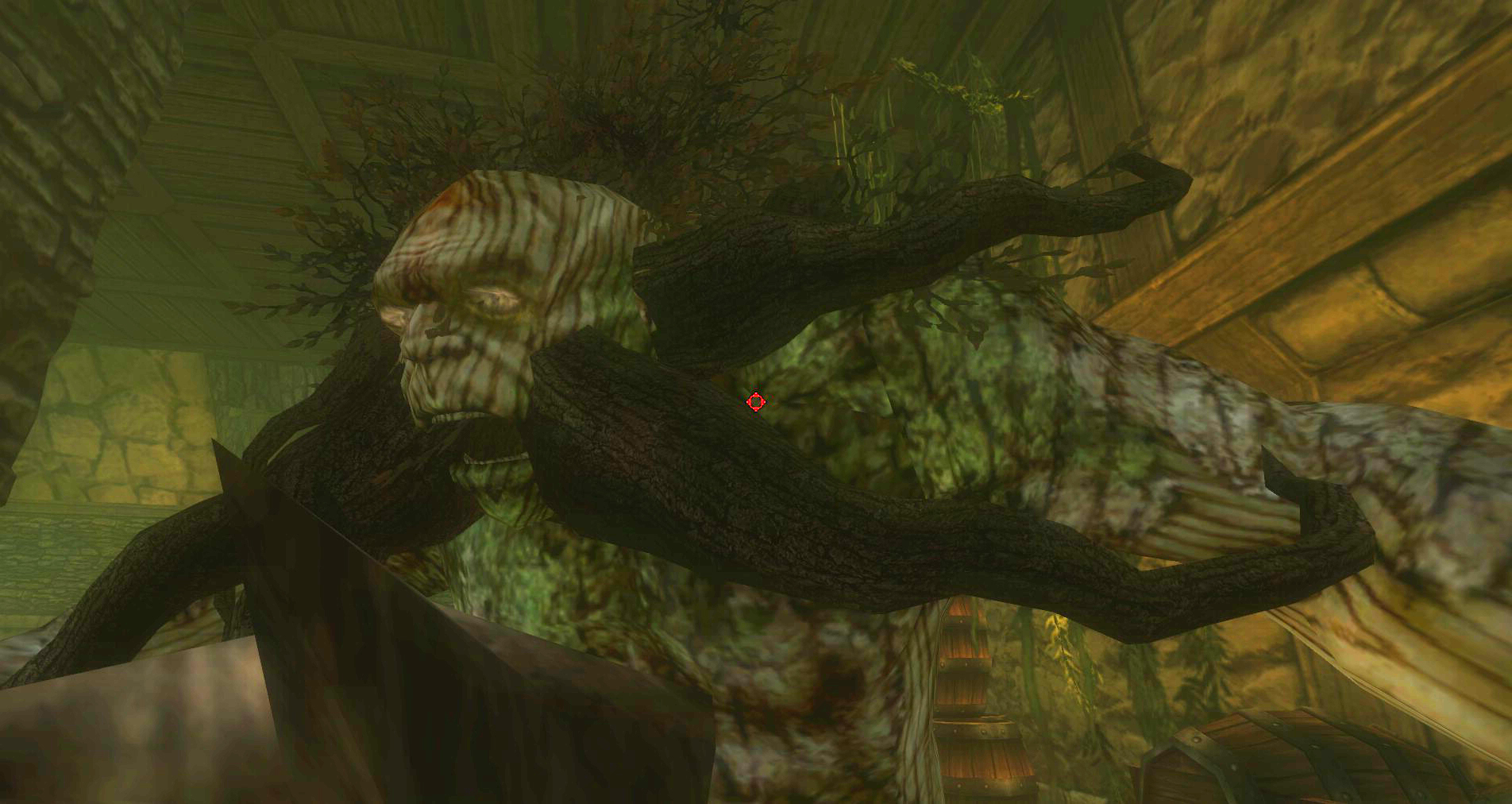 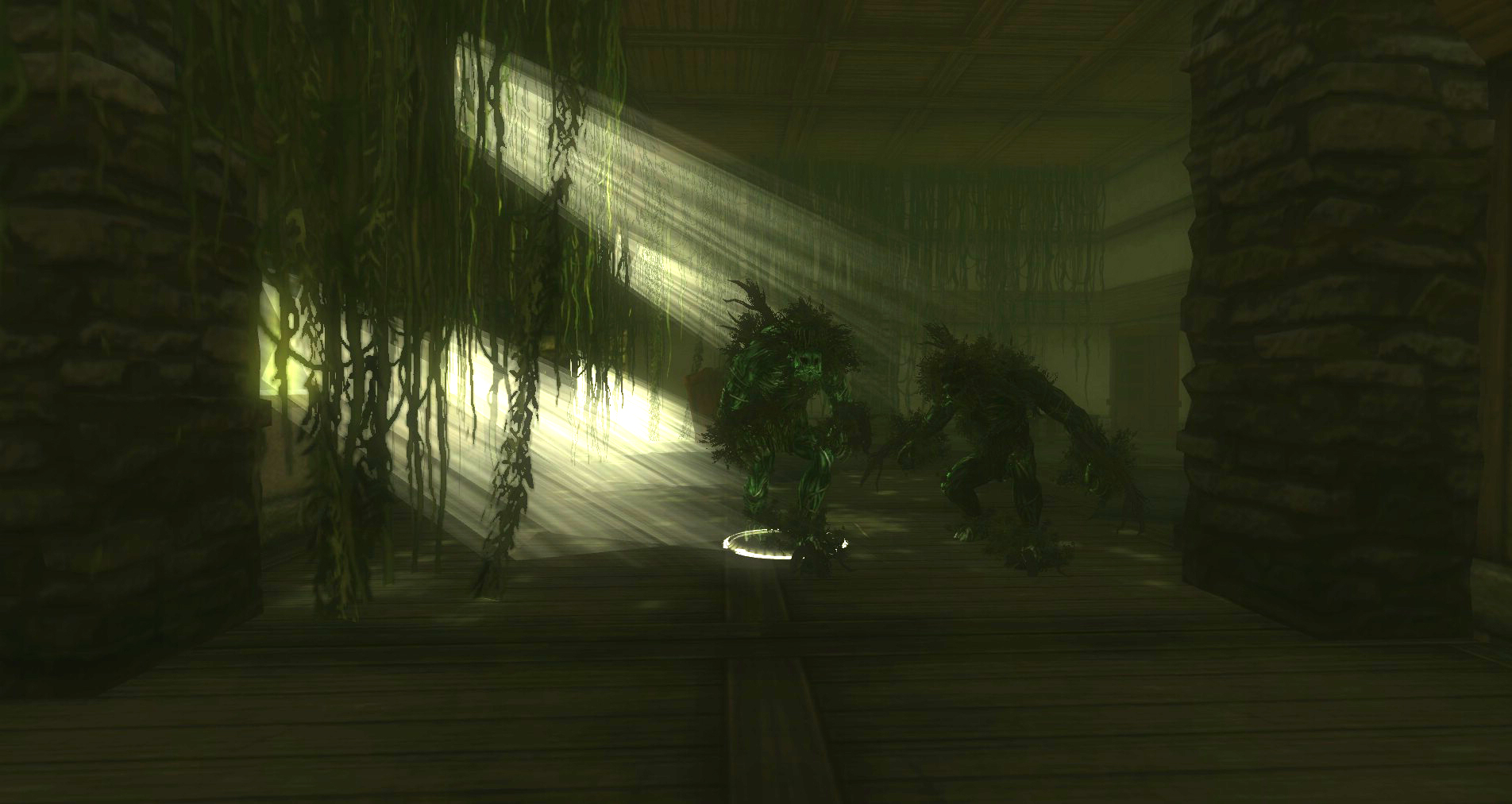 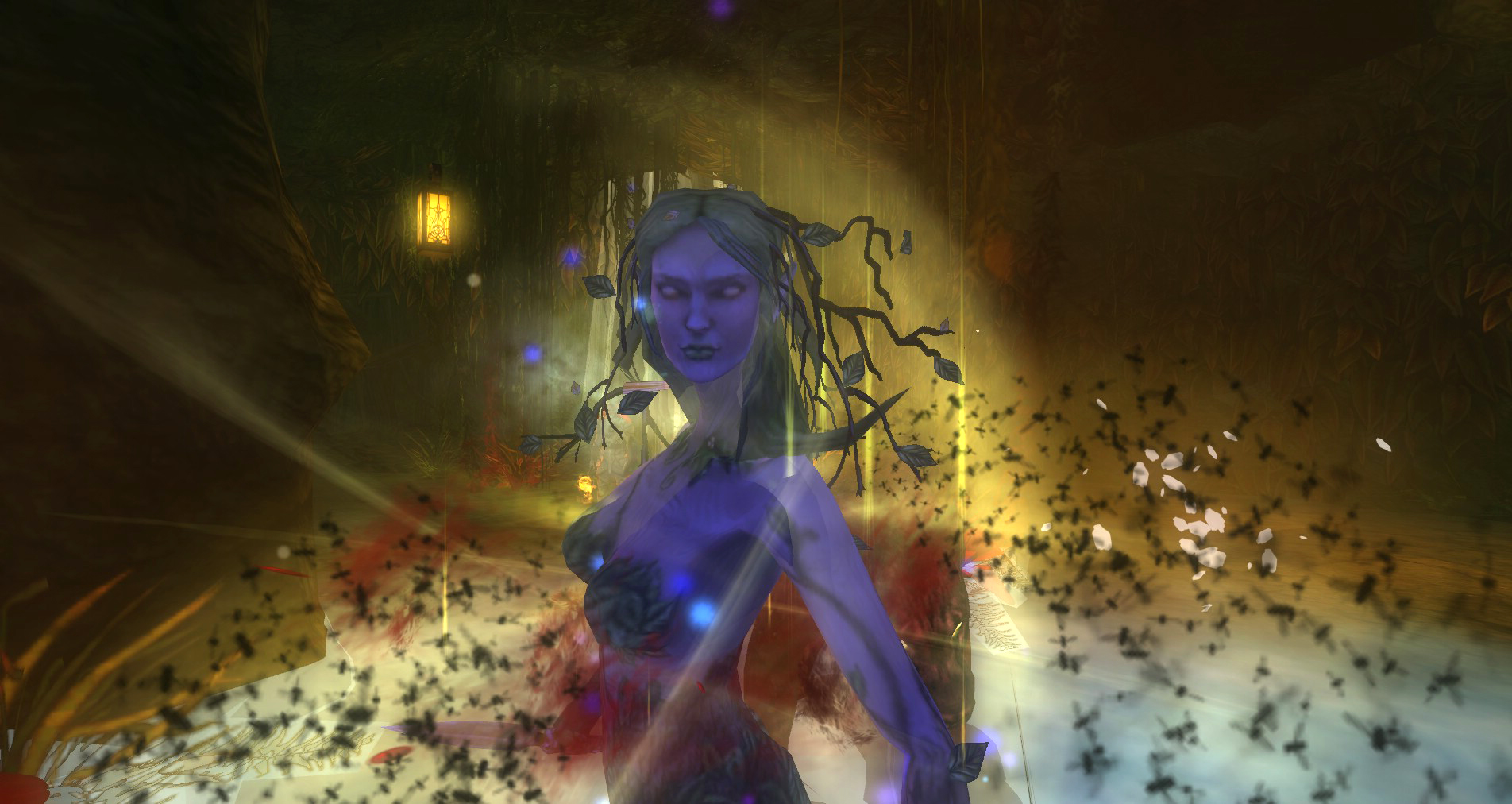 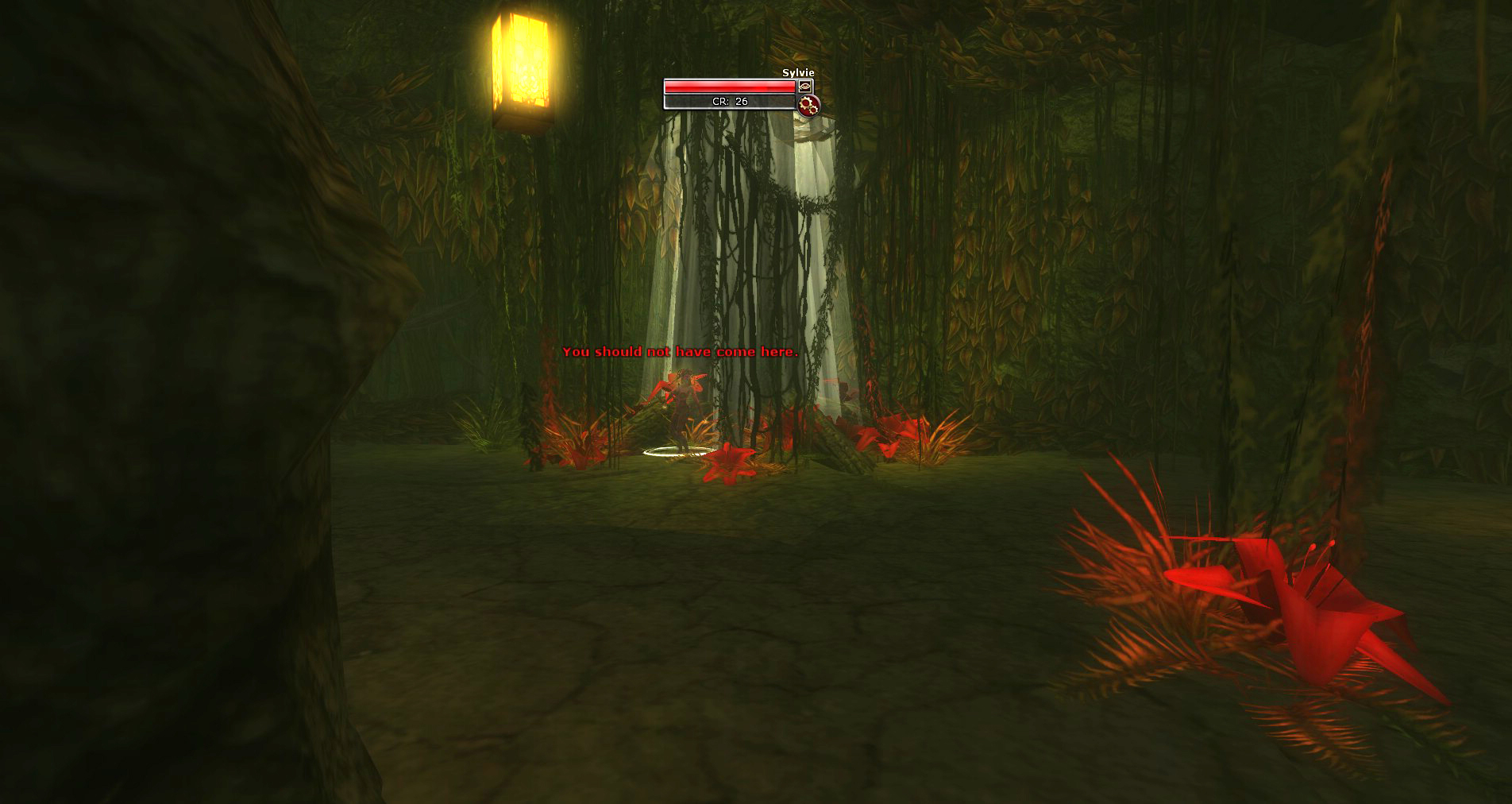 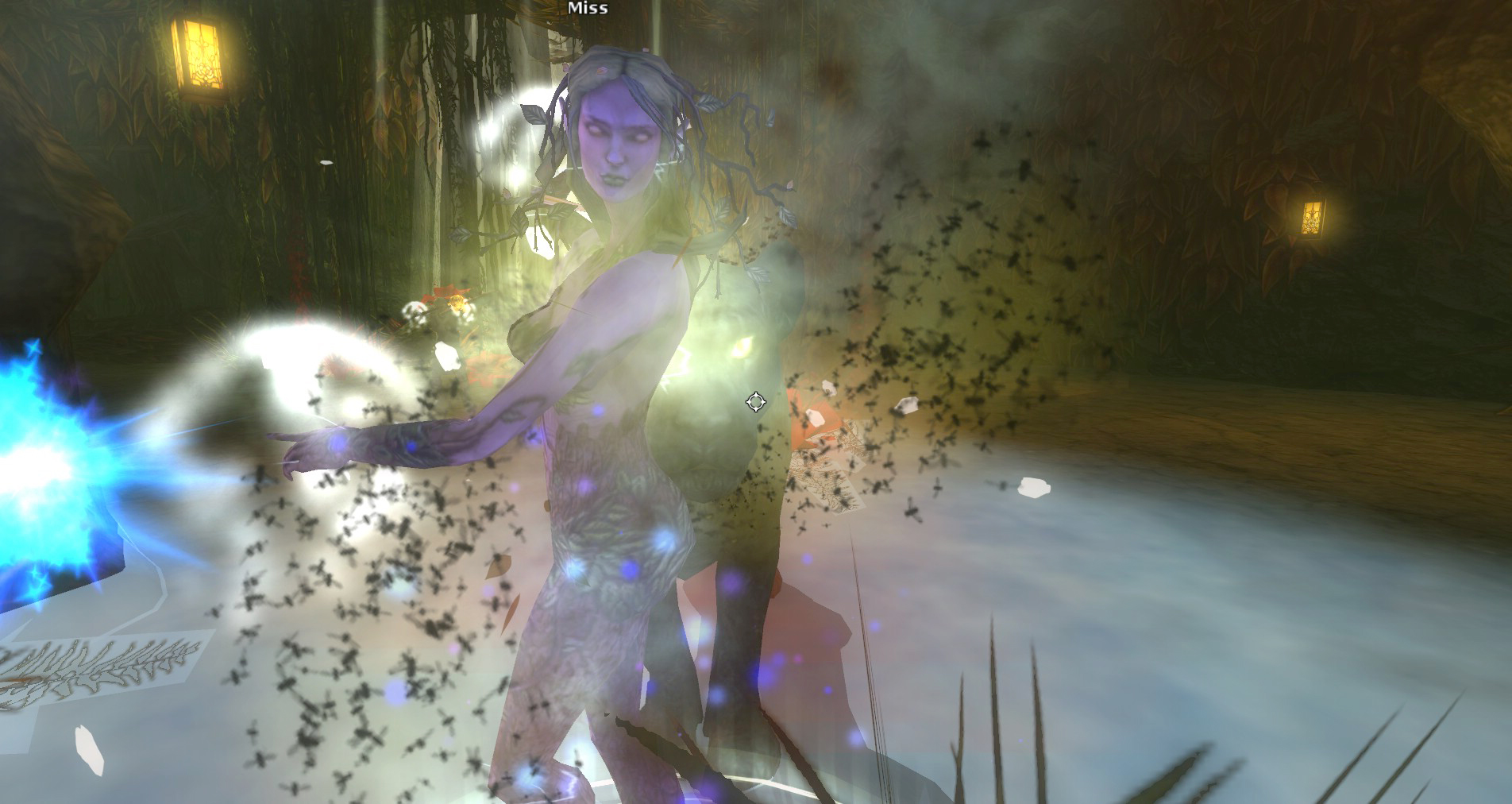 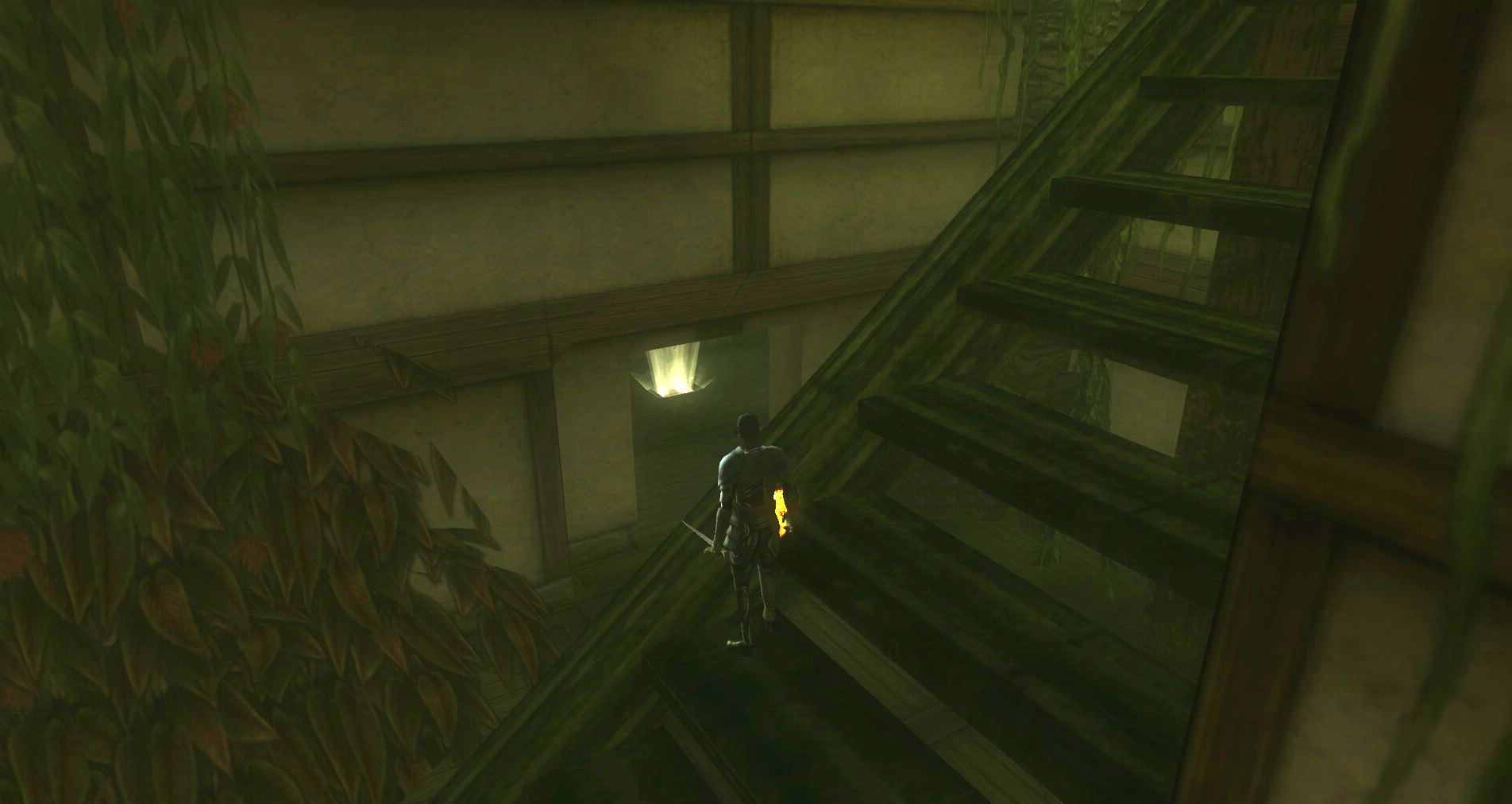 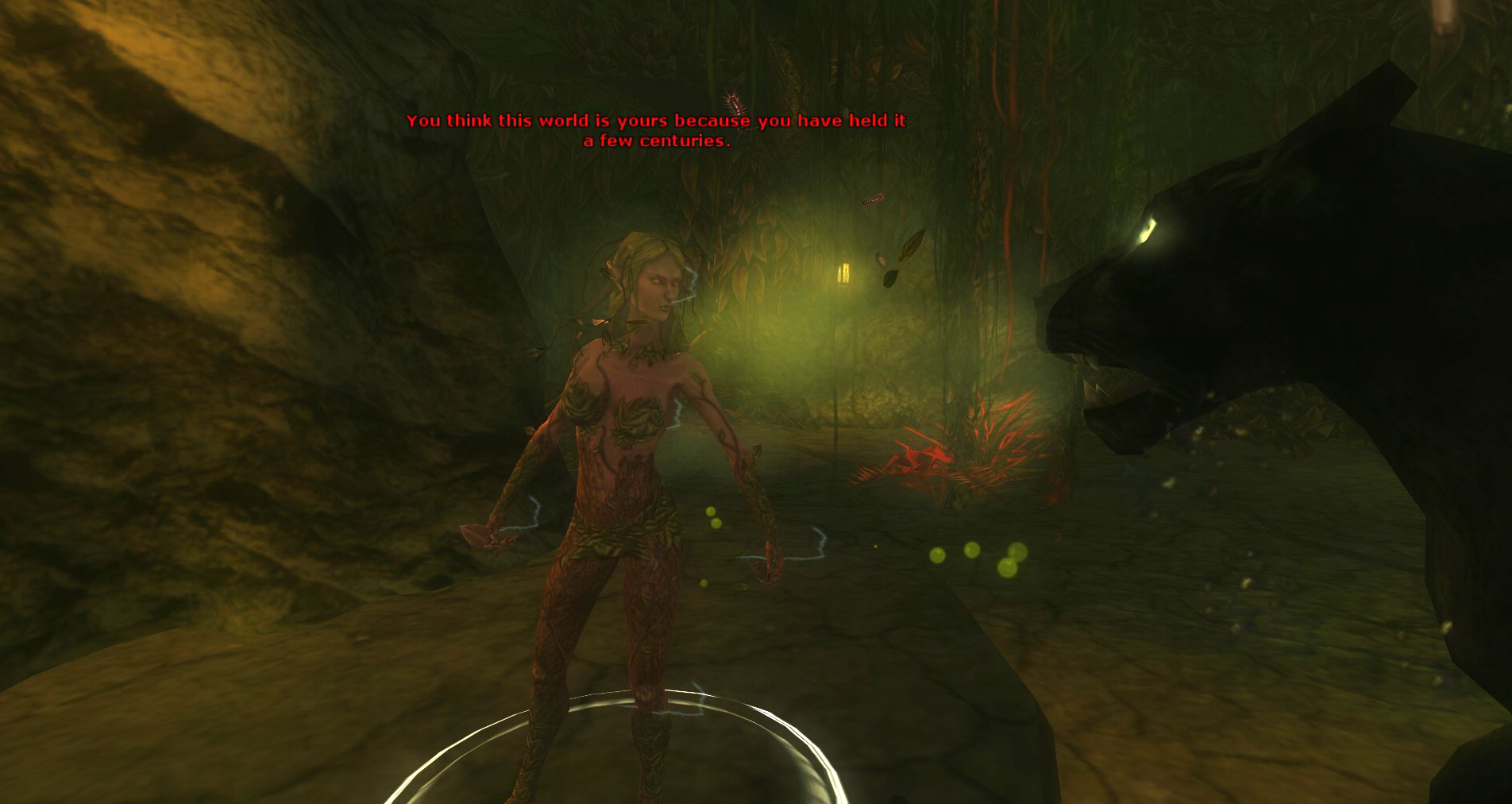 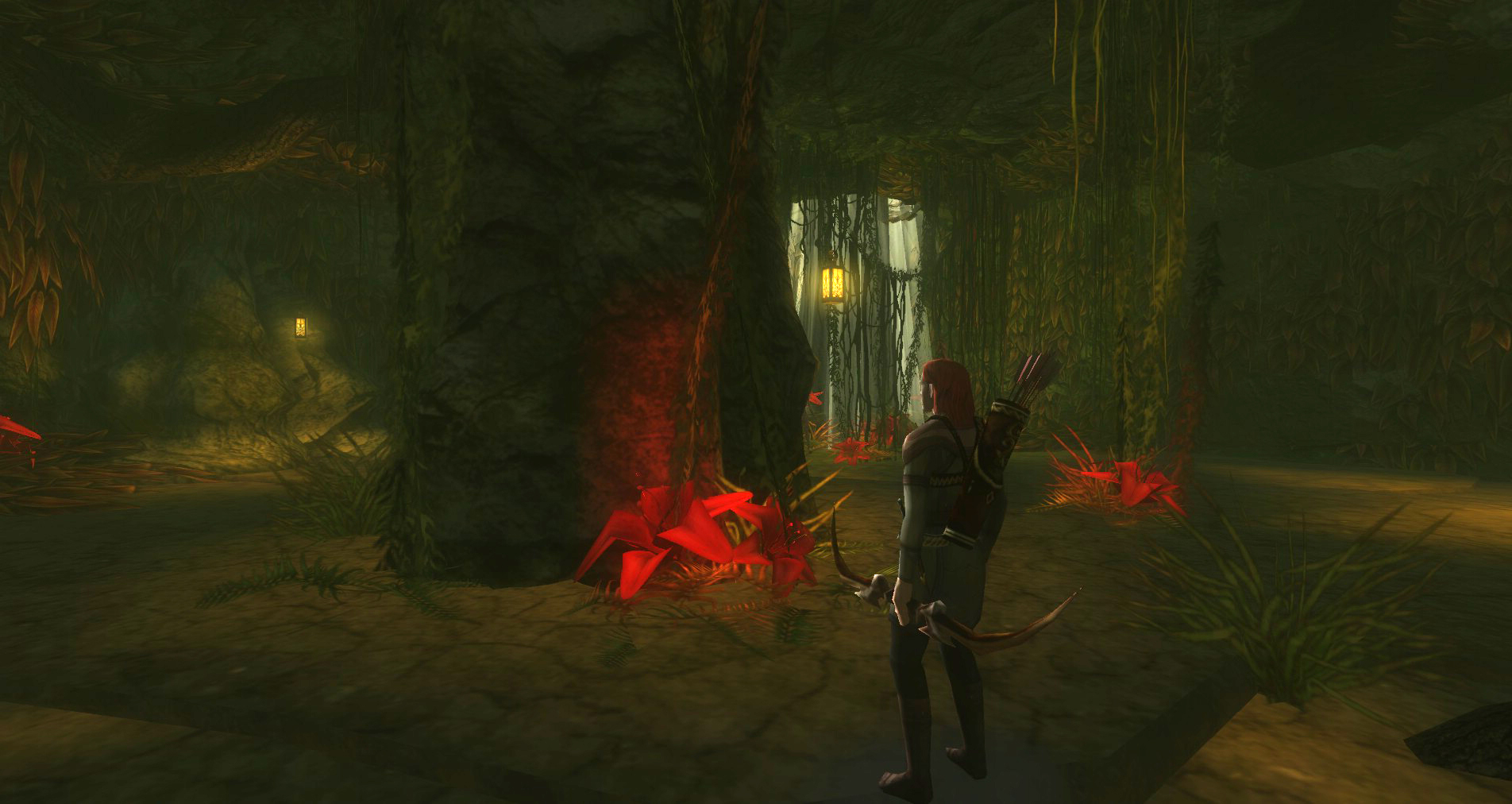 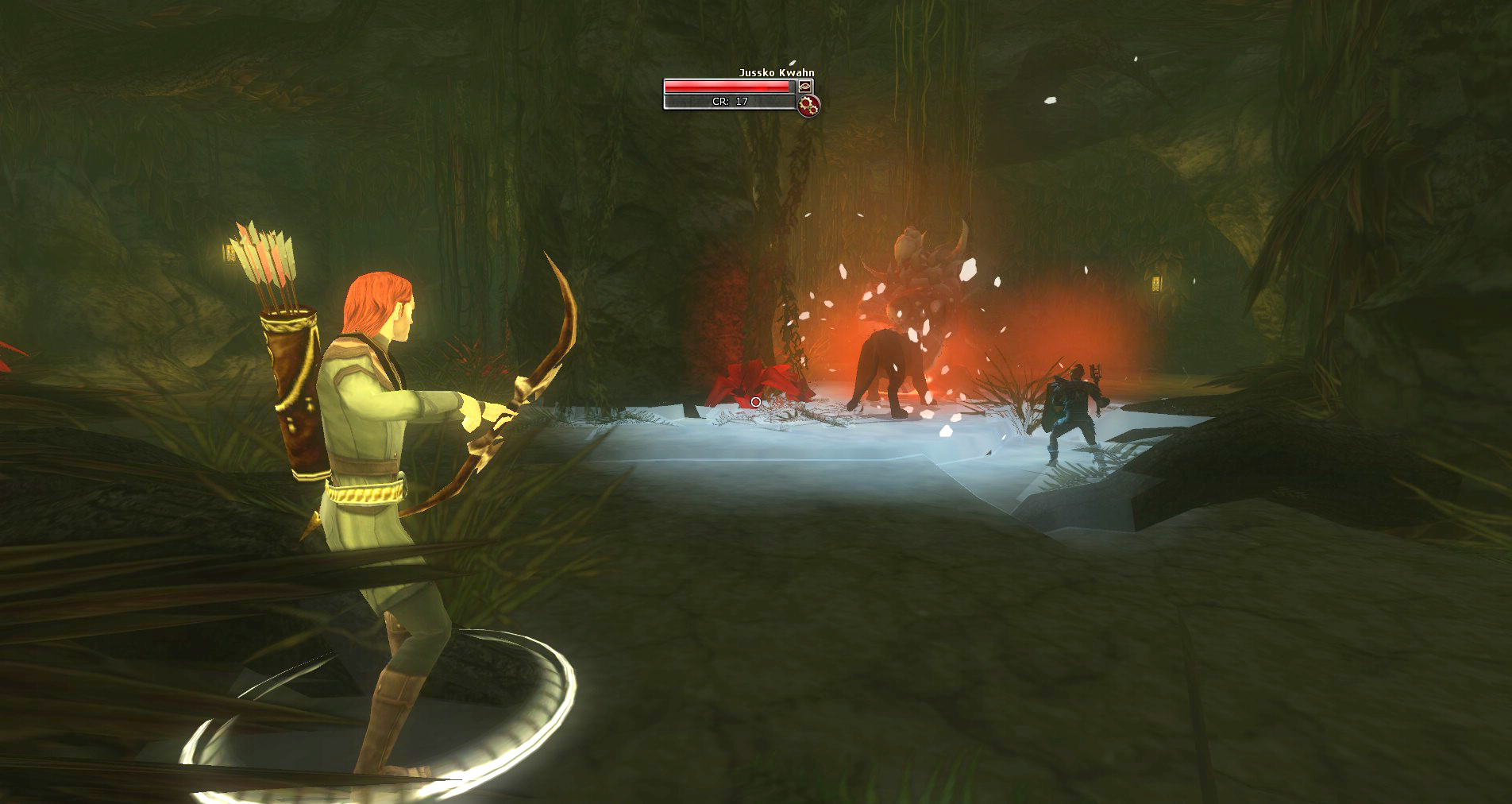 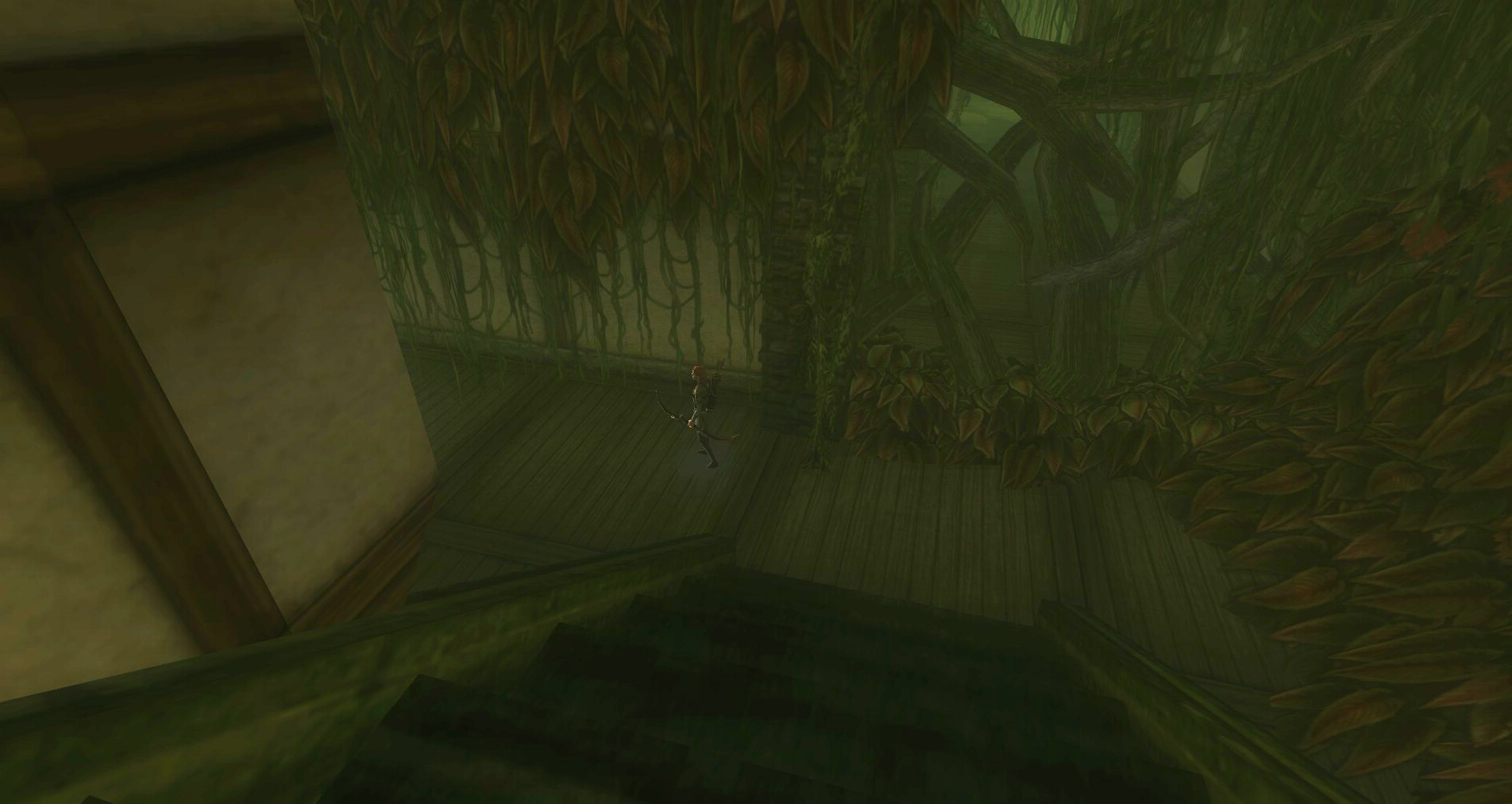 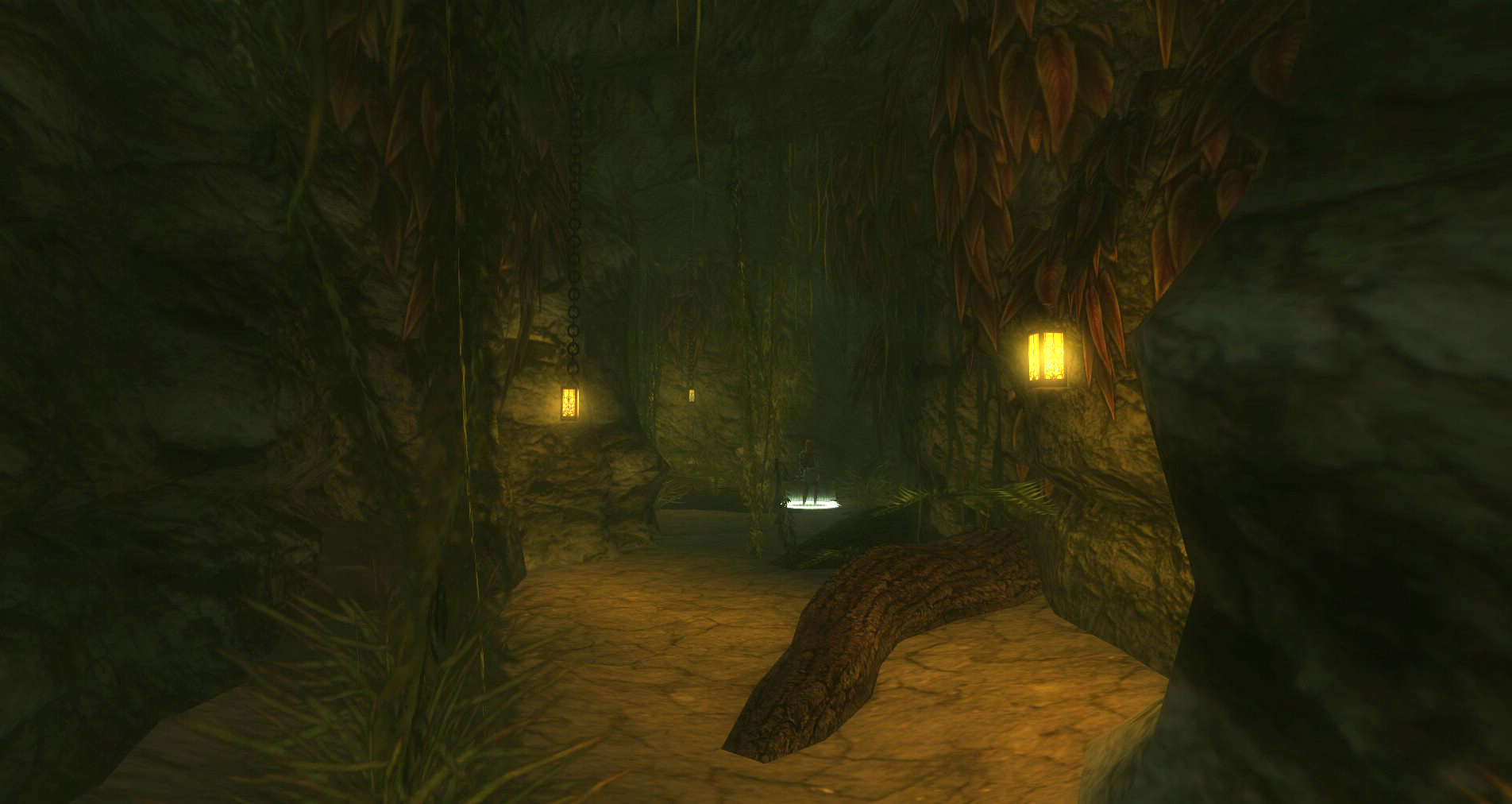 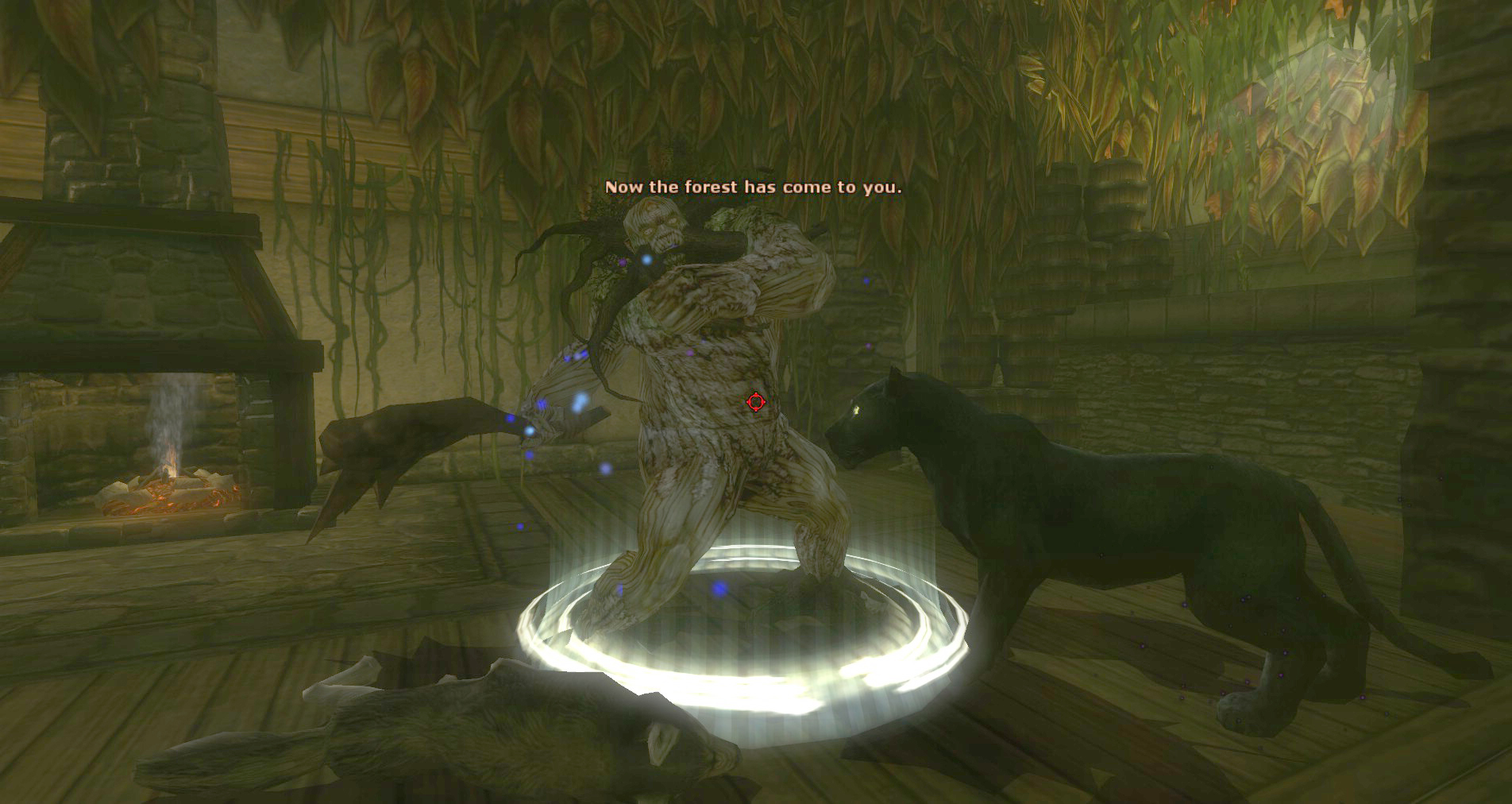 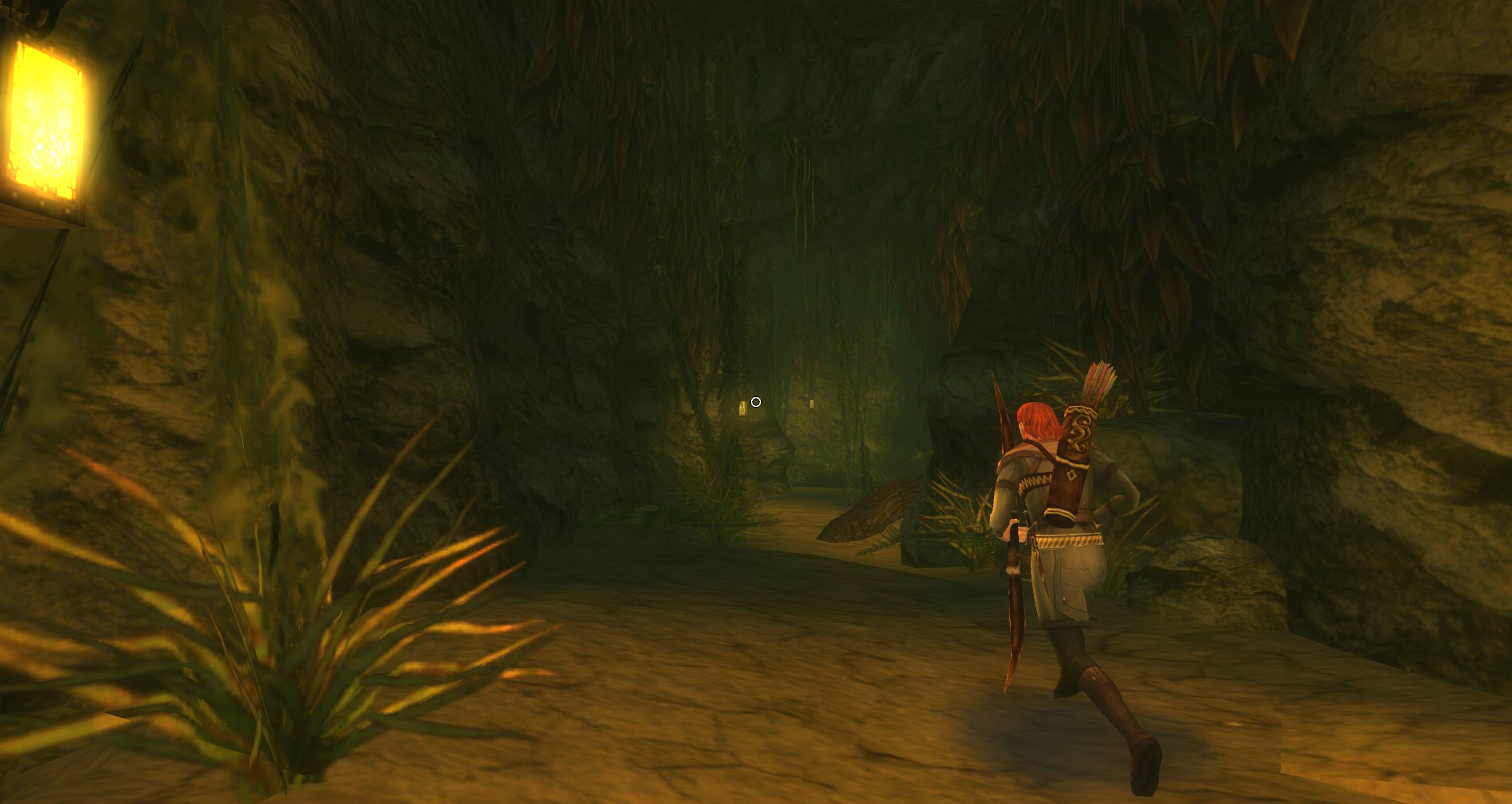 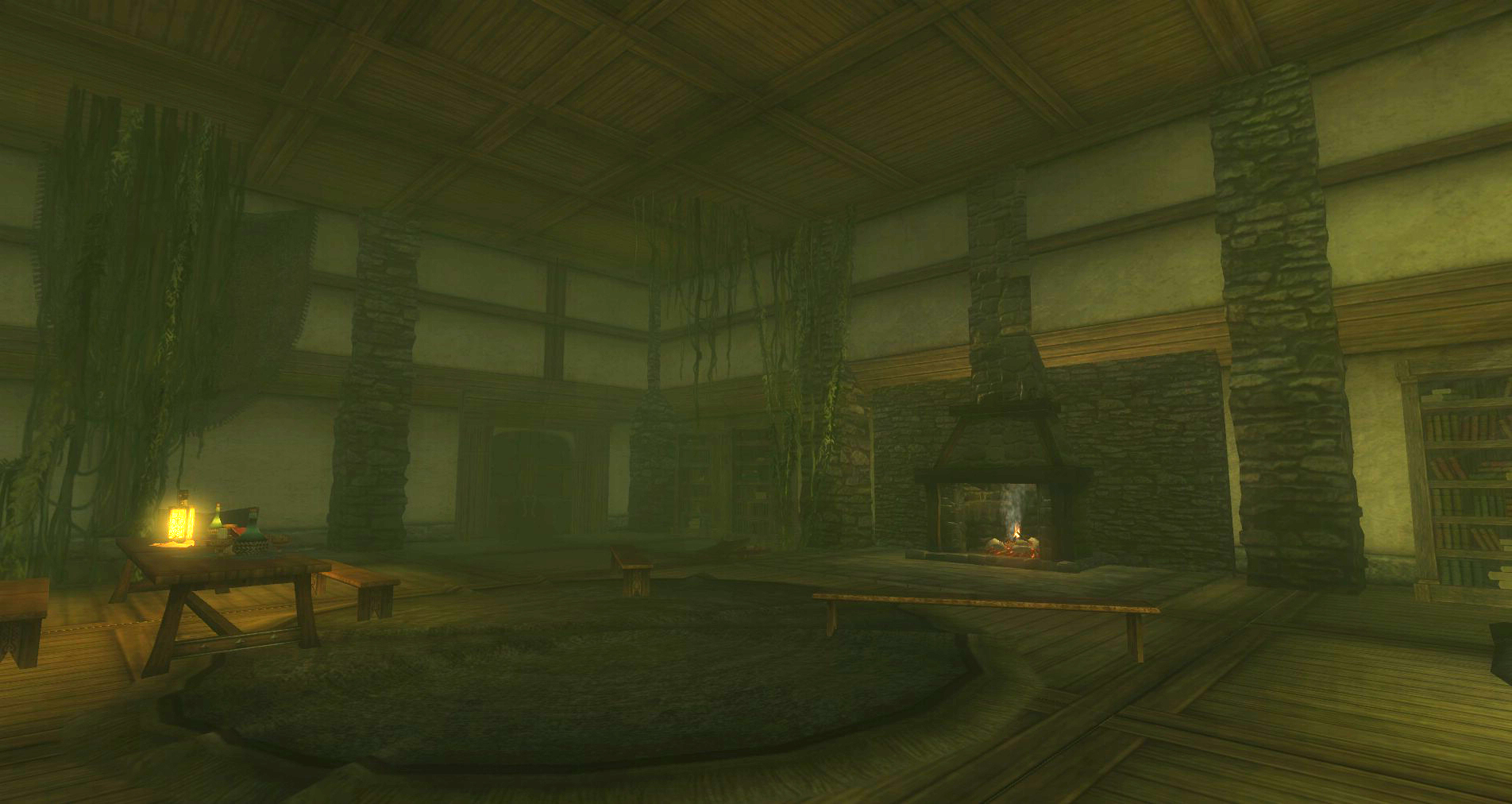 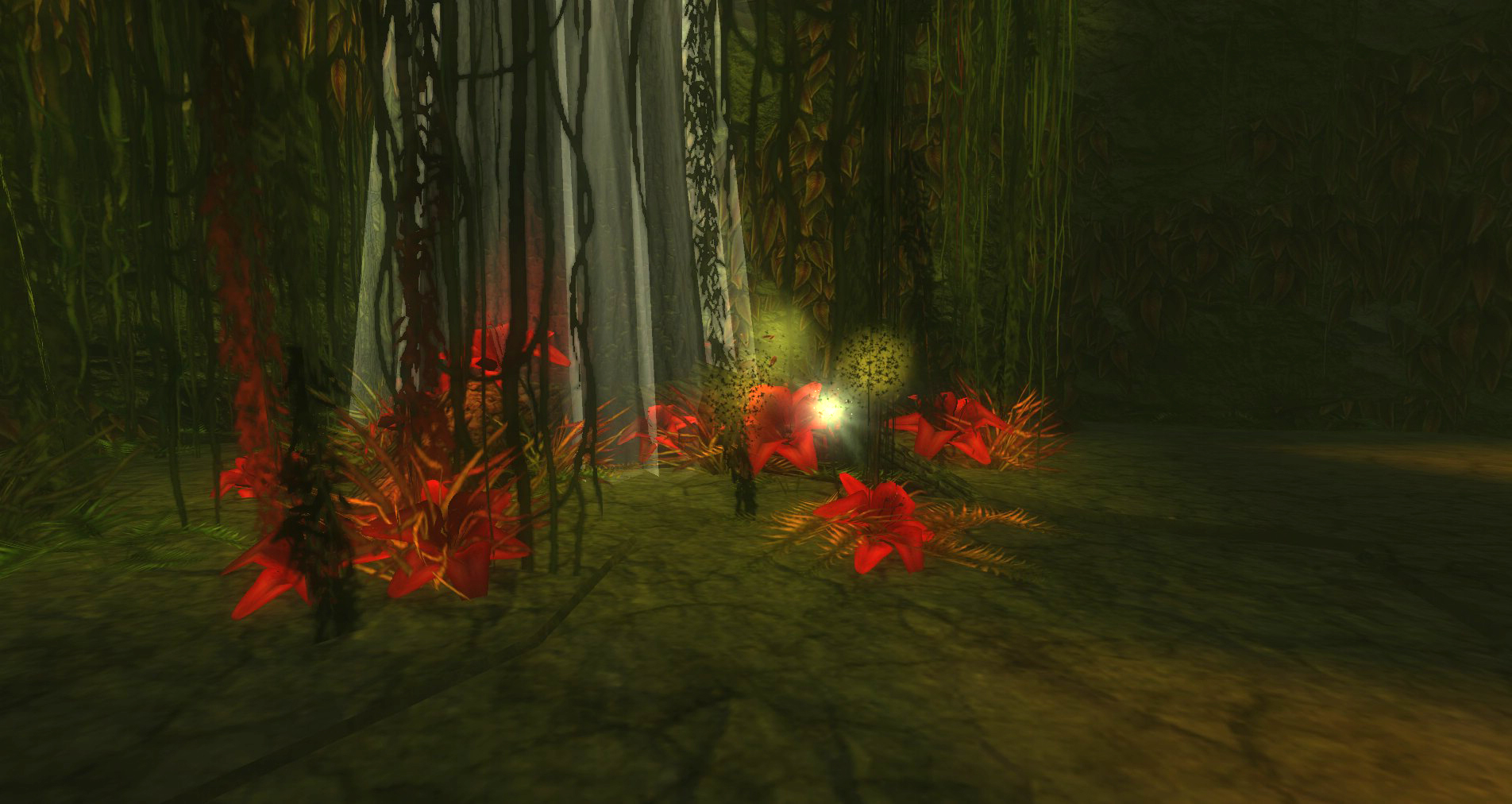 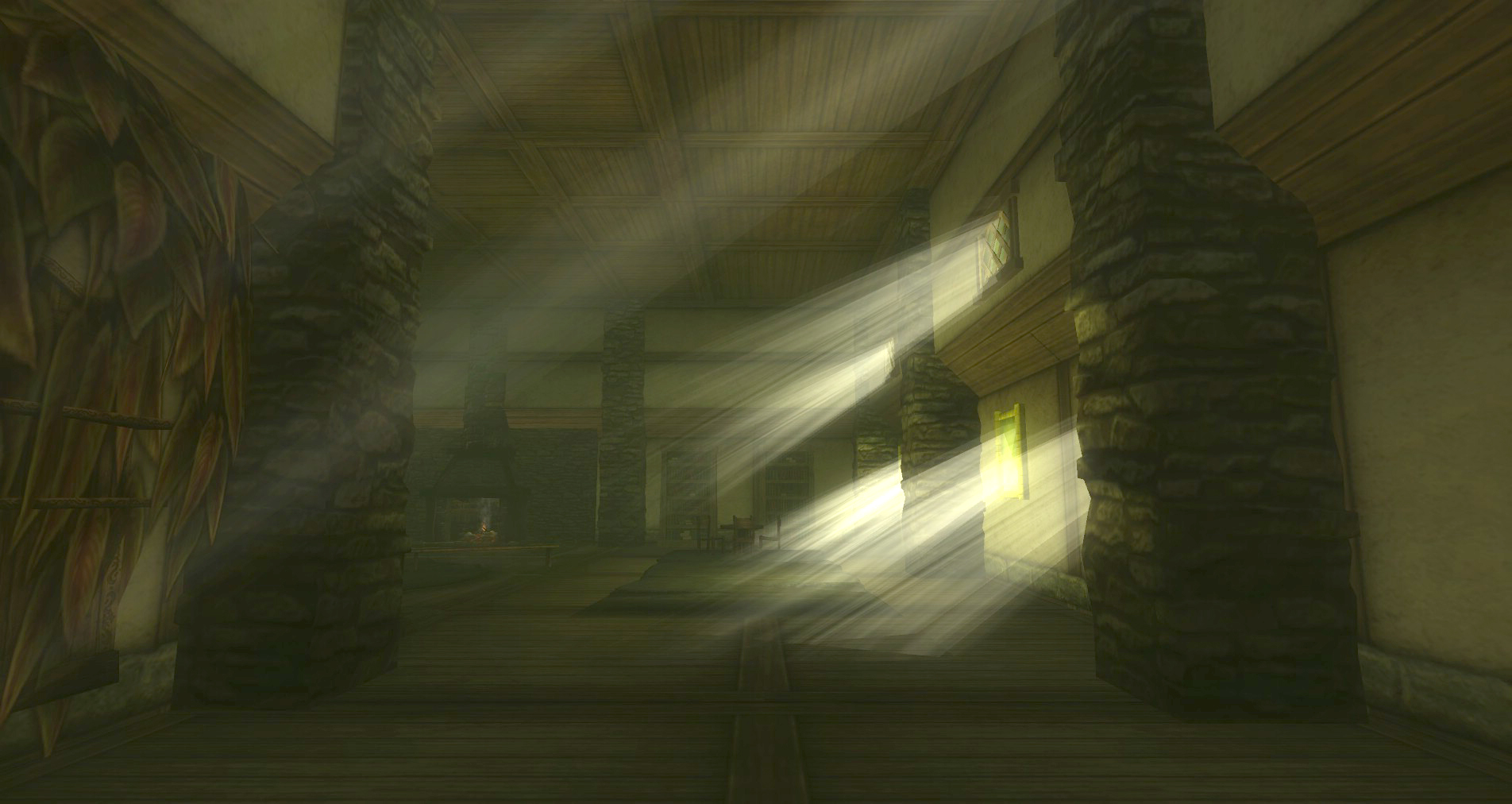 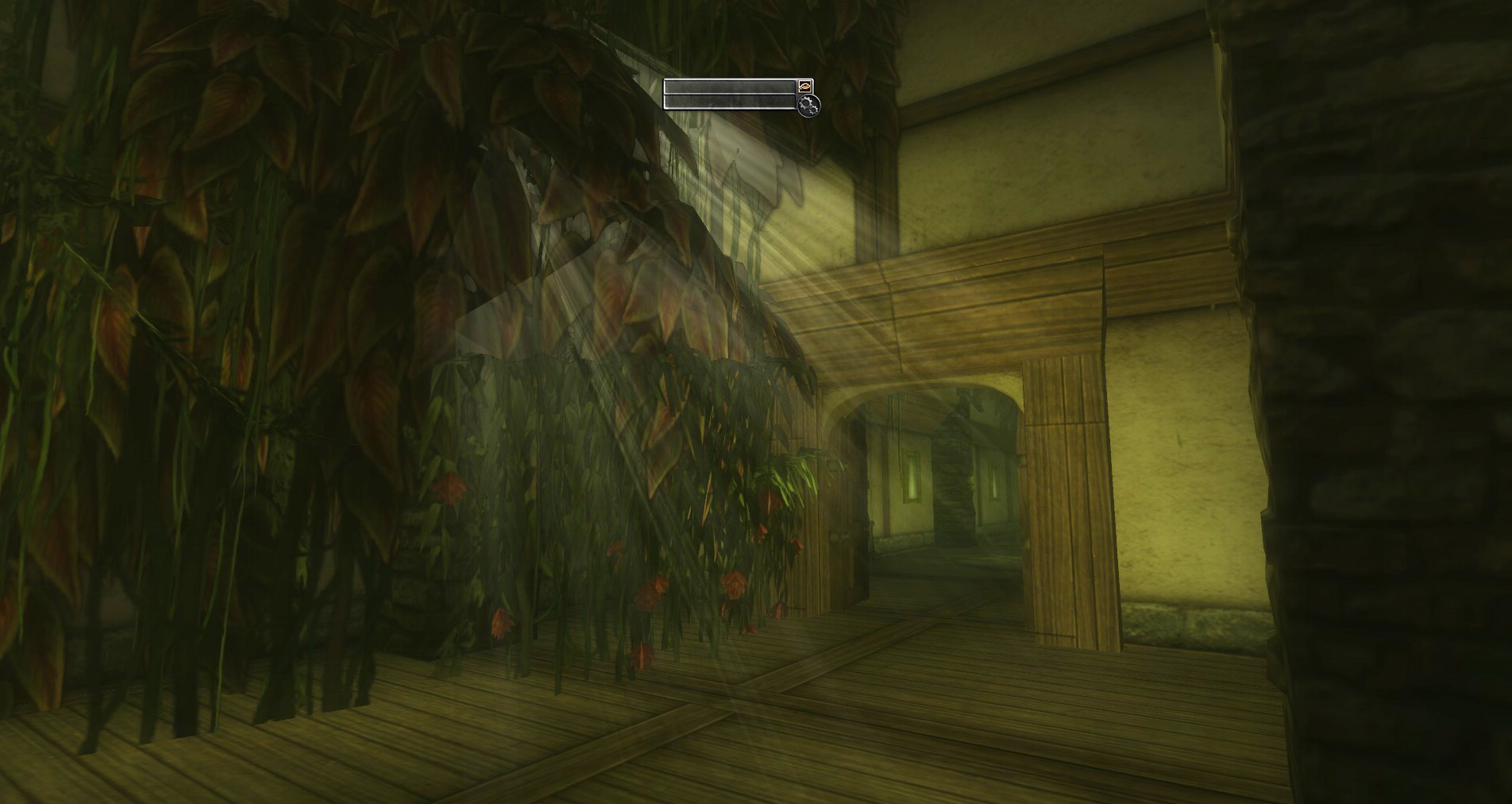 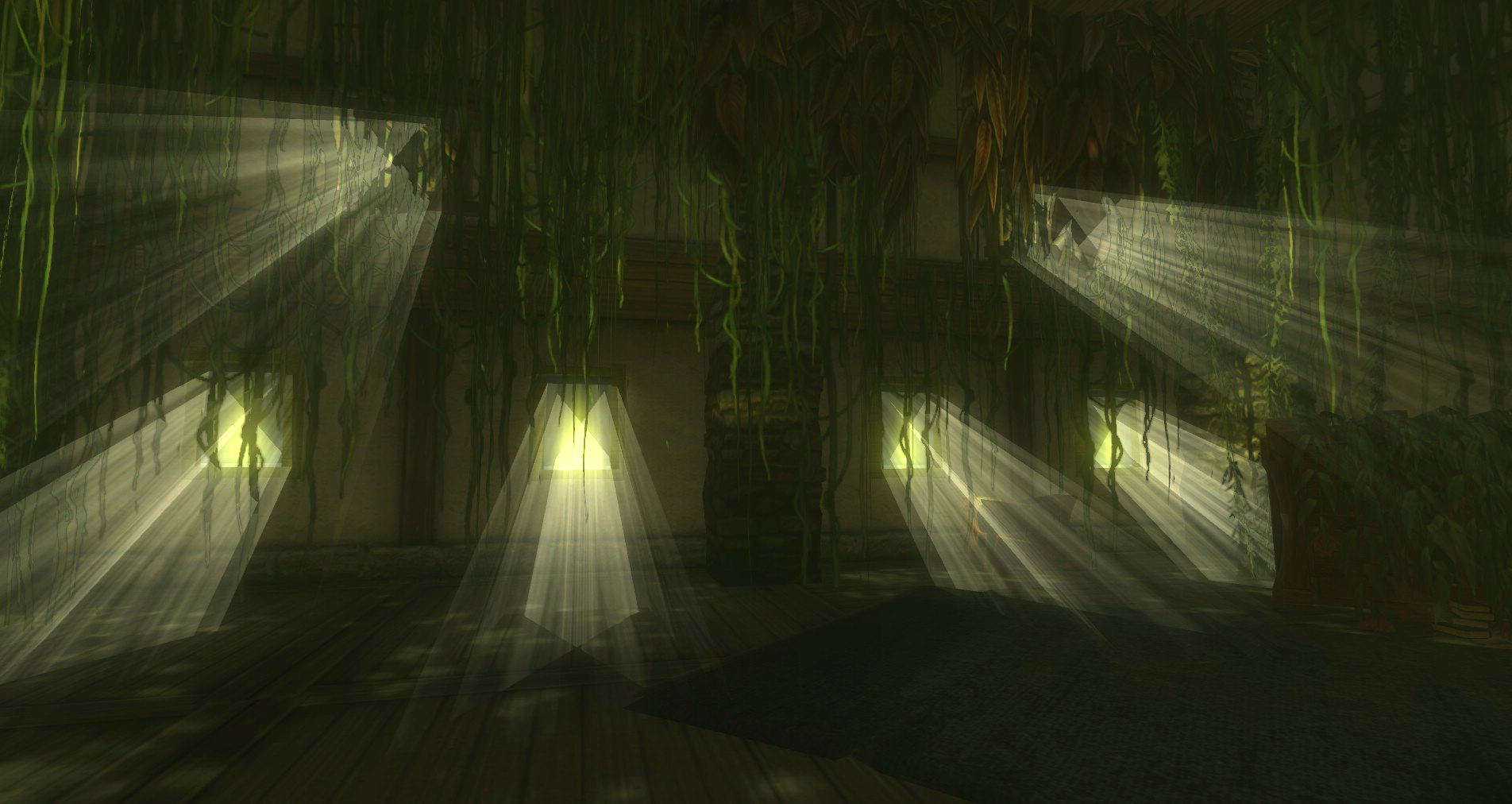 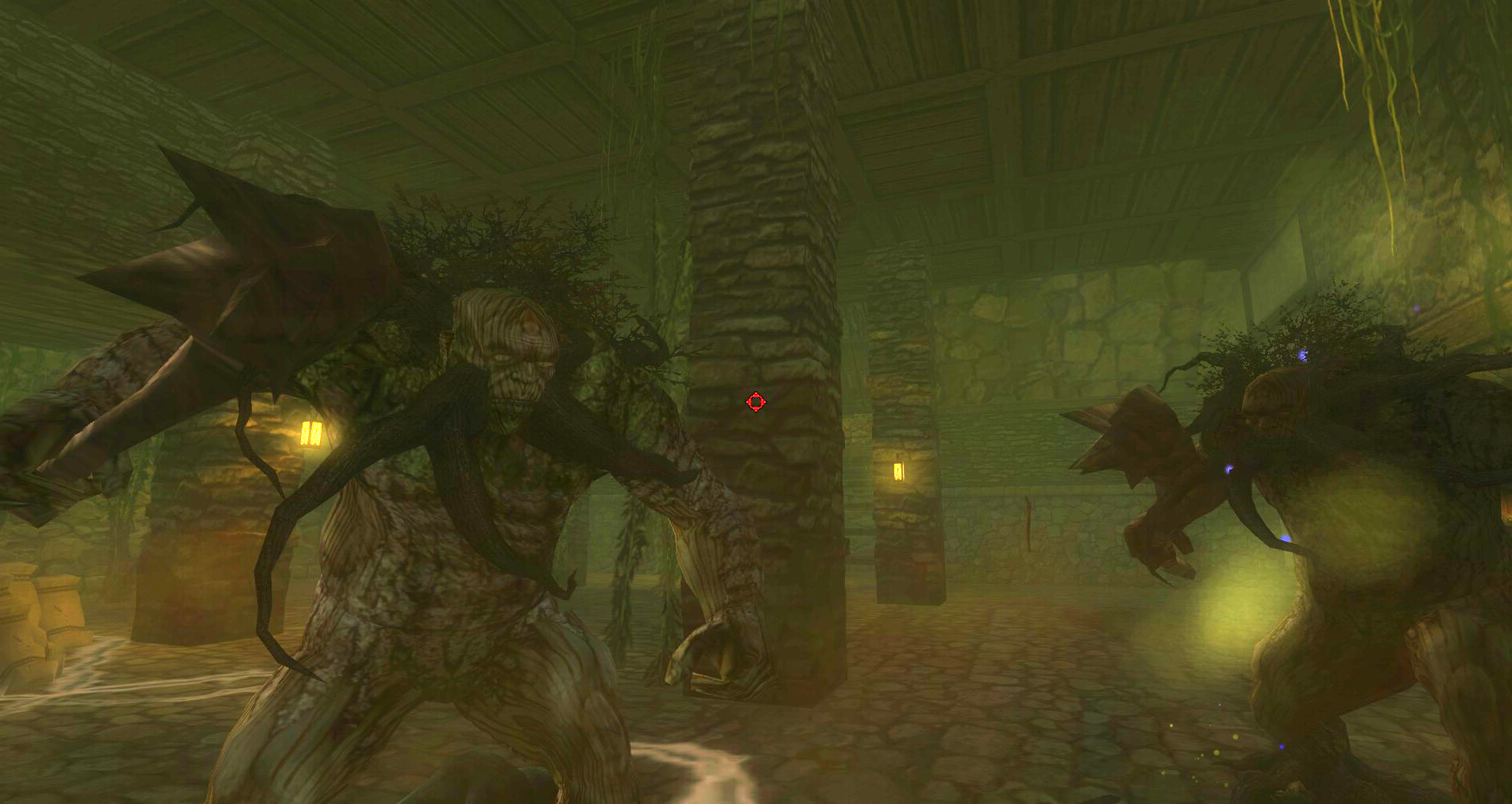 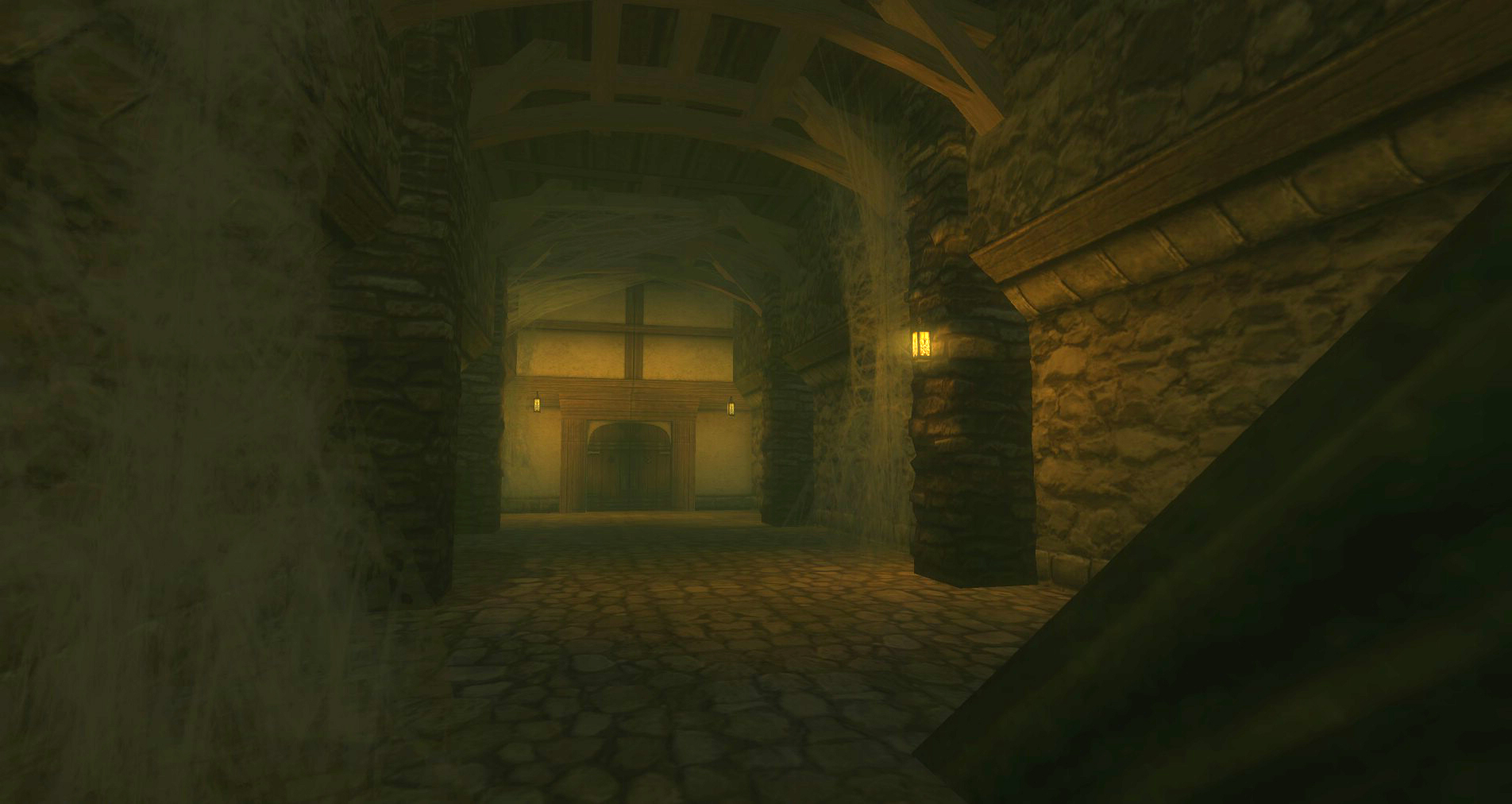 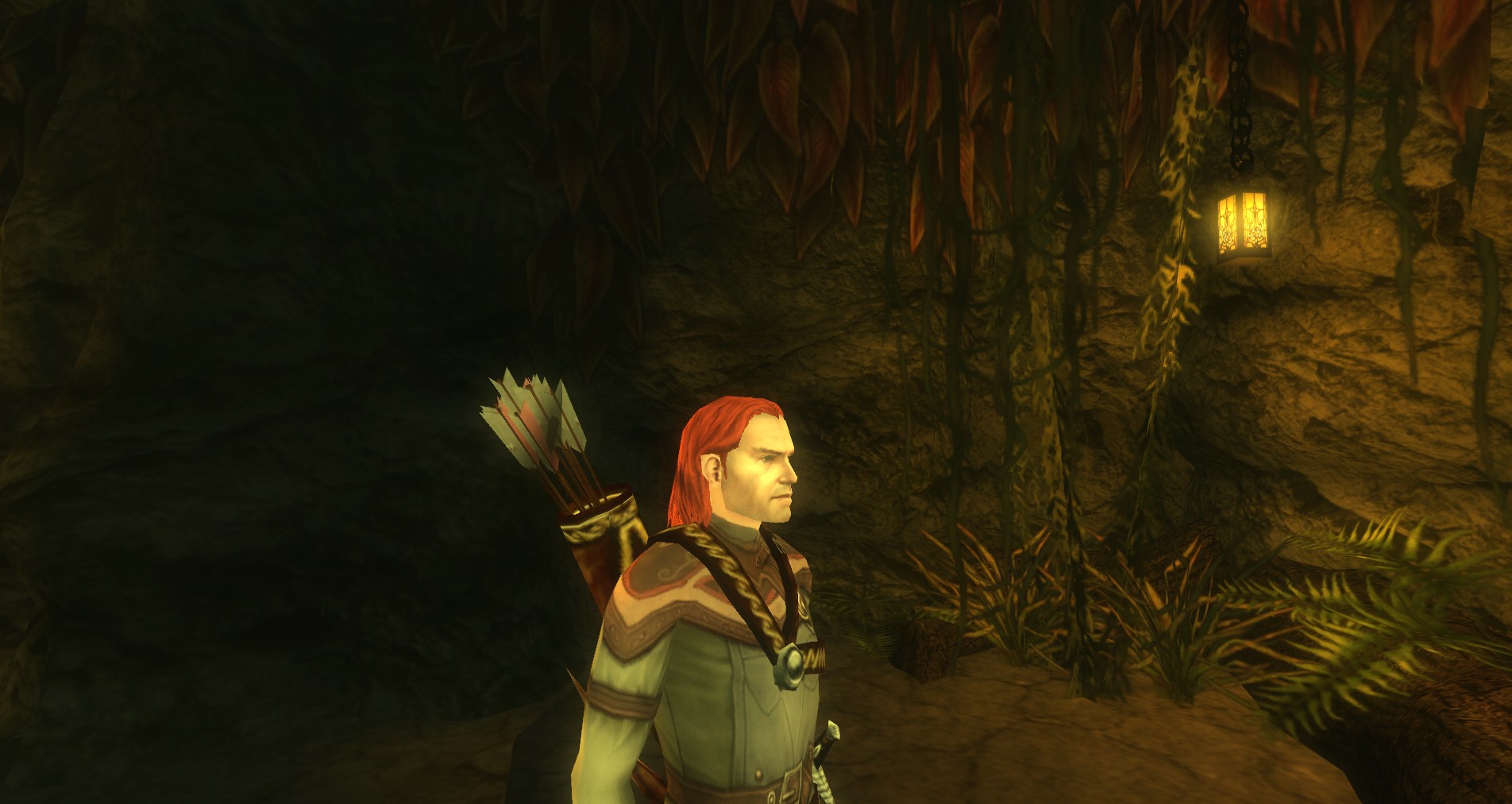 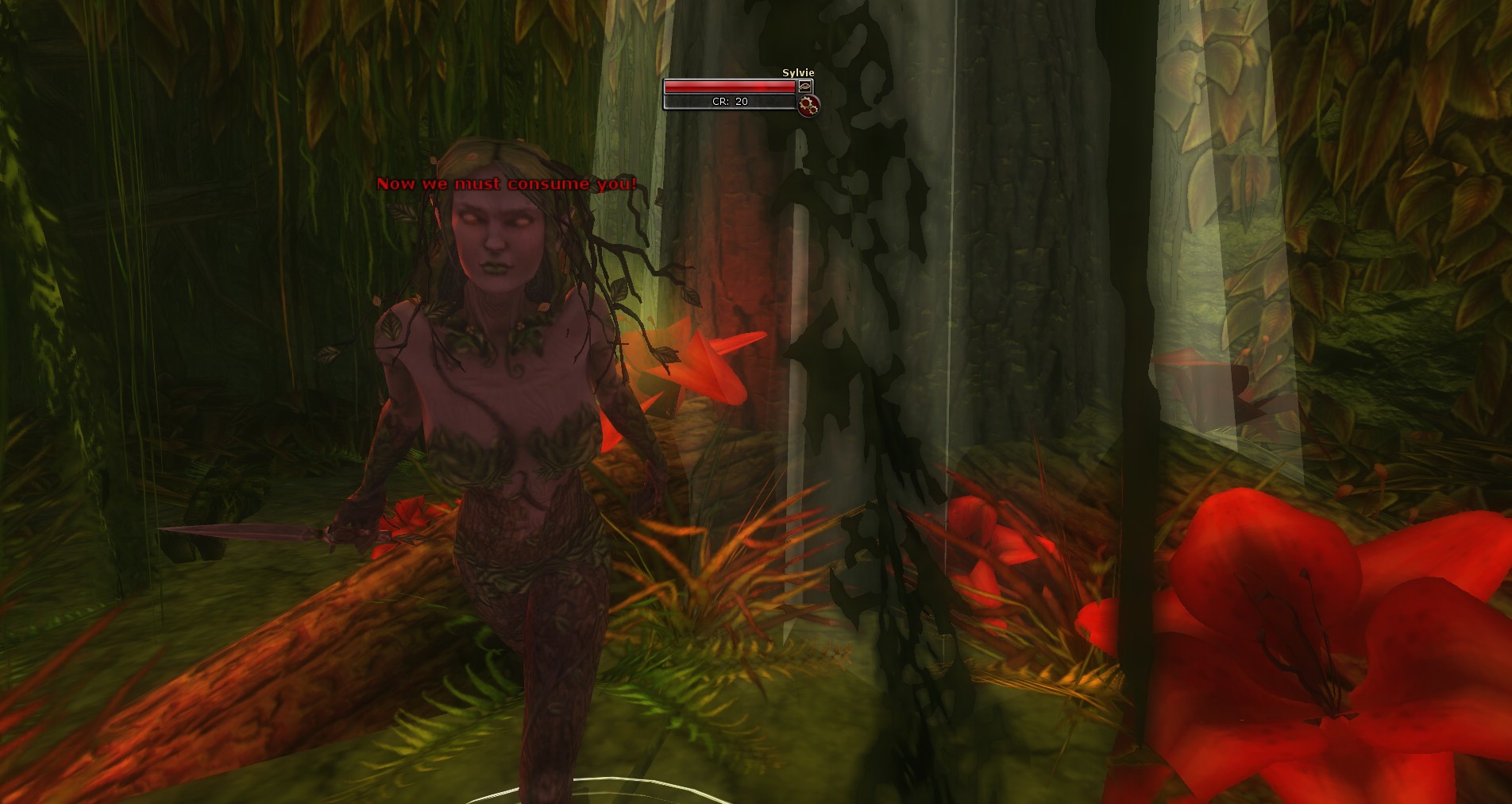 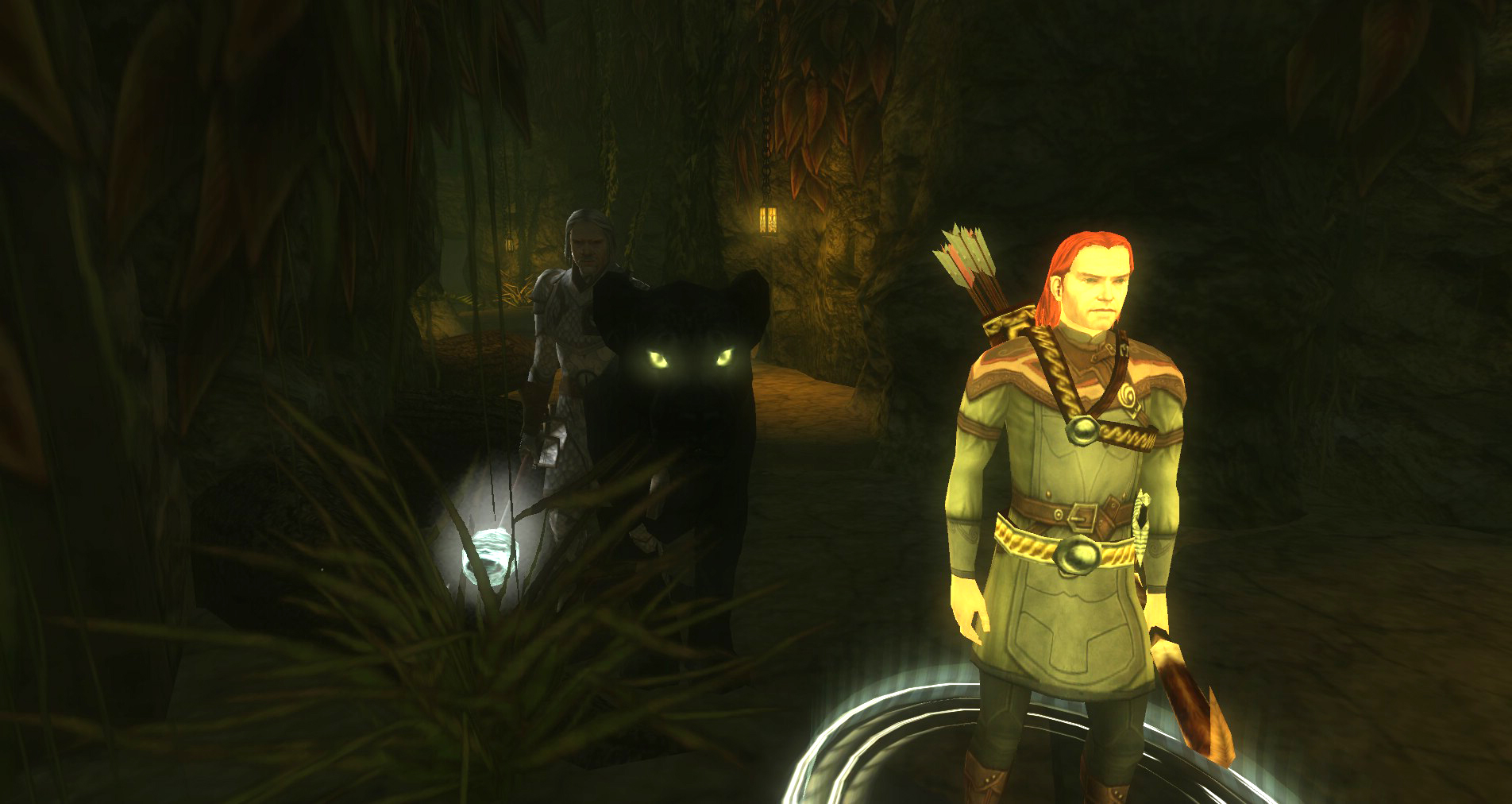 Once your party is ready, make sure to pull out all your pets and hirelings and then buff up and move in. Make sure that you have the buffs Resist Acid and Resist Electricity on as well as something to boost your saving throws against fear. You can also use an item that makes you immune to fear. The Primal Wisps chain fear, which will knock you out of the fight frequently unless you are protected. Expect your pets and hirelings to be feared a lot. Luckily, this is a stepped quest and there is not much harm they can cause if feared.

In the first corridor past the first door you will run into some Vine Horrors to start things off. Before you take down the vine wall make sure to buff, heal, and haste. As soon as the vine wall is broken you will start a short timer to complete the next optional objective.

As soon as the vine wall comes down you have just a little bit of time to kill what is in the study. Make sure you get the second wave too. If you kill all of the mobs before the wood woad leaves, you will anger him and he will burst past the vine wall blocking him off from you. Fight and kill the wood woad Robar to get the optional XP. If you are able to complete this same type of encounter two more times throughout this quest, you will get all of the extra experience points as well as a couple of bonus chests for your efforts. If you fail to lure any of these wood woads out you will fight them all together near the end of the quest.

Once you have cleared this area, head off to the Banquet Hall. Watch out for bear traps that are laid out along the way.

There are a couple of bear traps just inside the Banquet Hall. If you wait half a second before charging into the room, the enemies within will likely step in them. This will make them easy to kill. Remember, once a bear trap releases its victim, it will reset in the same place and will snatch anyone else that is there.

You can actually detect these bear traps through the wall. If you have a rogue they can do this while the door is being opened. Then they can slip in and disable the traps while the others in the party take care of the enemies.

You will see a mysterious figure run off at the top of the stairs. Don’t worry about this person just yet.

Before you charge in, make sure you are hasted and ready to face the mobs inside quickly. This will be the second Wood woad optional encounter. If you kill both waves of mobs before the time is up, you will again gain the attention of the Wood woad here. This Wood woad is named Prinus and is a red named of the same power of the first one.

Just after this area. you head down the stairs and see the mysterious bard once again. Don’t chase after him. Instead, go down the stairs and move underneath. On the wall to the north there is a secret door that conceals a chest full of loot. You don’t want to pass this up!

When you get to the servants’ quarters, don’t go inside immediately. Instead head down to the left and you will see a couple wolves and another vine wall. Take out the wolves, buff up, and get hasted.

This area is the third and final Wood woad optional encounter. If you take out the waves of wolves and Red Musk Zombies you will coax Falcata down. Kill him to get the extra XP for the optionals plus an easier run to the end of the quest and extra loot. You can’t beat that!

Now head into the Servants Quarters and clear out the room. This will lead you down into the cellar.

Watch out for the bear traps. If you’re unprepared, the traps can really mess things up. Try to stick the mobs in them if possible, then have your rogue disable them ASAP as they will be much more trouble than they are worth.

Second, you will catch up with the mysterious figure, a Harper, who is also trying to figure out what’s going on. He can help you with the fight, though not very effectively. Buff him up and keep him alive if you can so he will open the door at the back of the room. Don’t let him die: as of Lamannia if he died in the cellar the door to the final fight would not be opened up.

If you failed to kill any of the wood woads earlier, you’ll find them down in the cellar. Have fun. If you are facing multiple wood woads, try having someone pull off a couple and keep them in the far corner. Then have the rest of your group peel one off at a time and kill it. This way you are not trying to fight multiple red named wood woads at the same time they are AEing the crap out your party. This can actually be a pretty rough fight if you do not work together. If you are lucky the Harper will have all the agro from all the mobs in the room when you enter so you can pull them off one at a time. Good luck!

If you were able to fight the wood woads separately and complete the optional, this room will be significantly easier. There are a few wolves in here but the biggest thing will be the two extra chests over by the shrine. This is very much preferred to the loot-less wood woad womping you would otherwise face. You will get 1 chest if you get 2 of the 3 still, so don’t reset the quest or anything thinking you are out of luck if one gets away.

There is a shrine over in the corner of the cellar in case you need a resurrection. If you don’t, clear it all out and shrine up. You are almost done with this quest and you will want to go into the last battle at full strength.

Make sure you run to the back of the cellar in the south east corner and detect the secret door before it is revealed for a little extra XP.

Follow the Harper, Jussko Kwahn, through the tunnel and into the secret Old Smugglers Cache. Here you will find a named corrupted dryad and the boss of this quest, Sylvie.

Sylvie is a powerful spell caster so be buffed and ready to tackle a red named caster.

Jussko will agro and start fighting her as soon as you enter. You should jump in to help him because she can be pretty nasty and will kill him easily. At this point you can still complete the quest if he dies but if you keep him alive he will help you kill her and her corrupted tree.

When Sylvia gets down to 20% she will run back to rest and heal in her corrupted dryad tree. Make sure you head over to it as well and start chopping it down. If you do not get it chopped down in 30 seconds, she will step back out of the tree fully restored and ready to rock and roll. This pattern will repeat itself until she is dead. Ultimately, you have to kill the corrupted dryad tree here to finish the fight. Luckily the corrupted tree will not heal so eventually you will drop it. You just need to take the punishment Sylvia will unleash on you while she is alive.

Once her tree is destroyed, she will die too, and the quest will be completed. You will have learned a lot of clues, so maybe it’s time to venture out of Eveningstar and find out the source of these druidic corruptions.