There is an evil plot afoot in Stormreach. The Lords of Dust seem to be conspiring to some evil design. They are held up in a warehouse in the Warehouse district of the Harbor. There are a few Silver Flame near the Wayward Lobster, just around the corner. Talk to them first and they will send you to the warehouse in which they are watching. They tell you that one of there own is in there and is in need of your assistance. Gather your party and head into the Cultist Base and uncover the plot the Lords of Dust have devised. Be wary once you get past the warehouse and move deeper into their base. There are surprises around every turn in this dungeon! 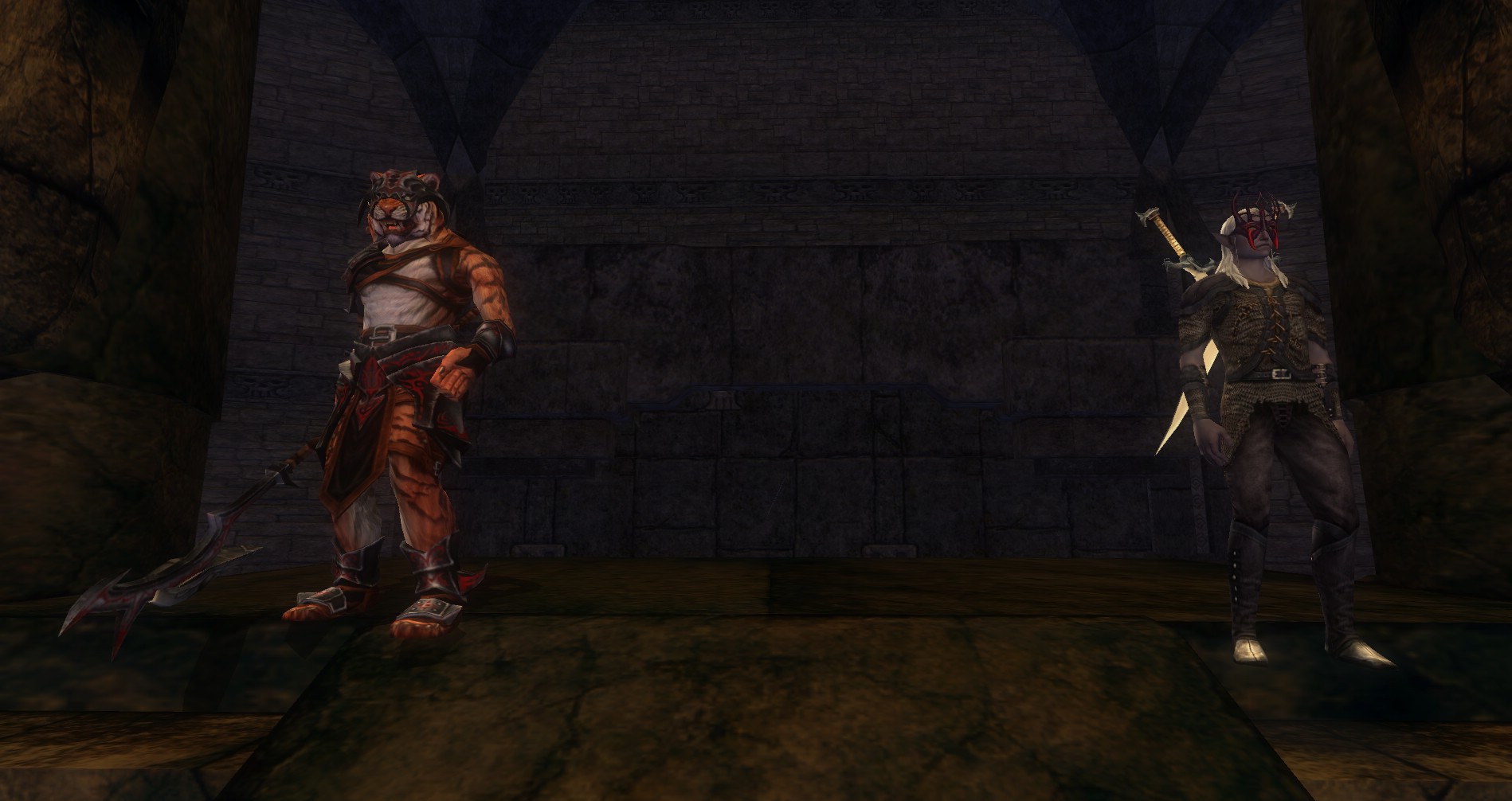 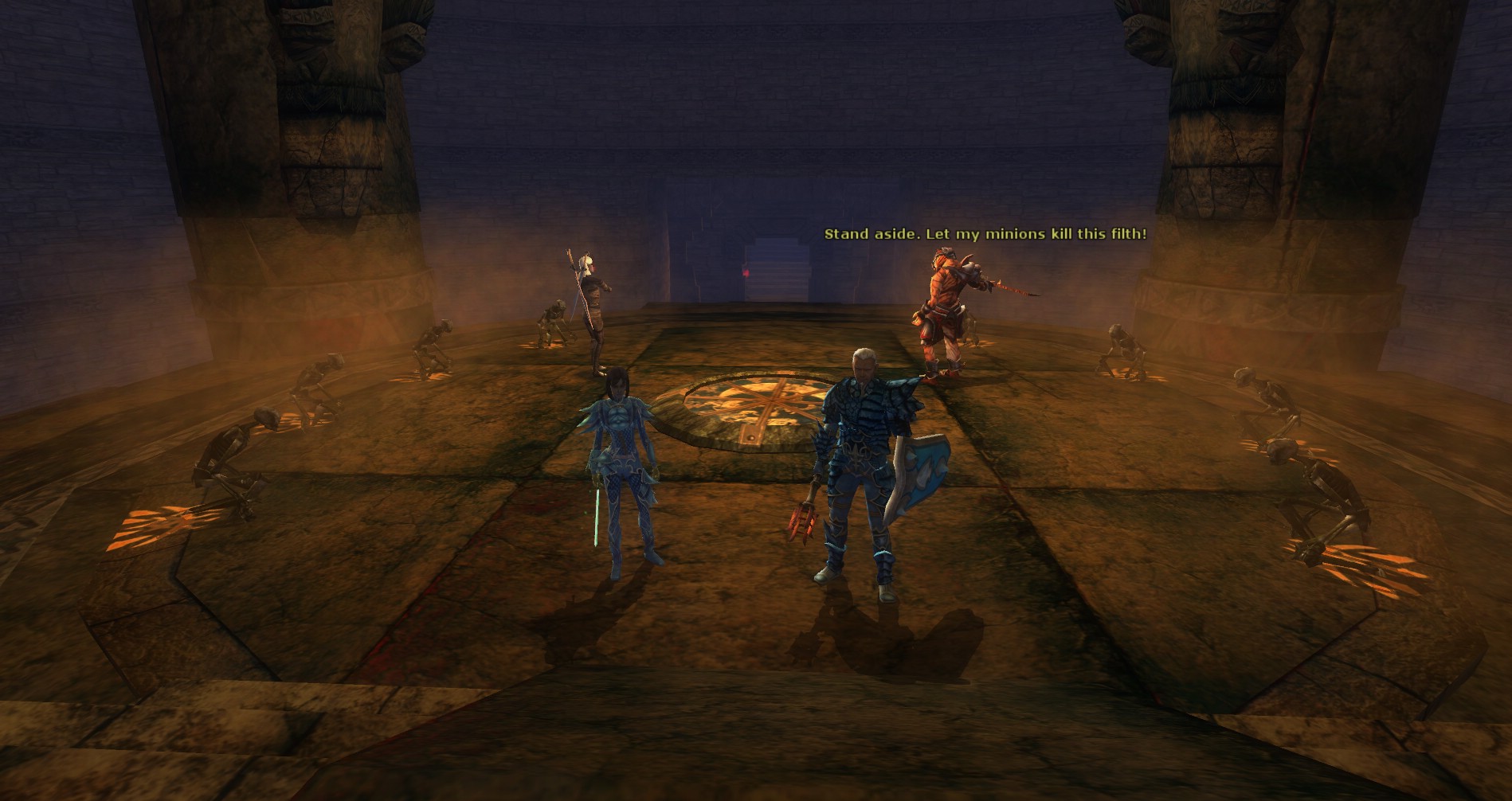 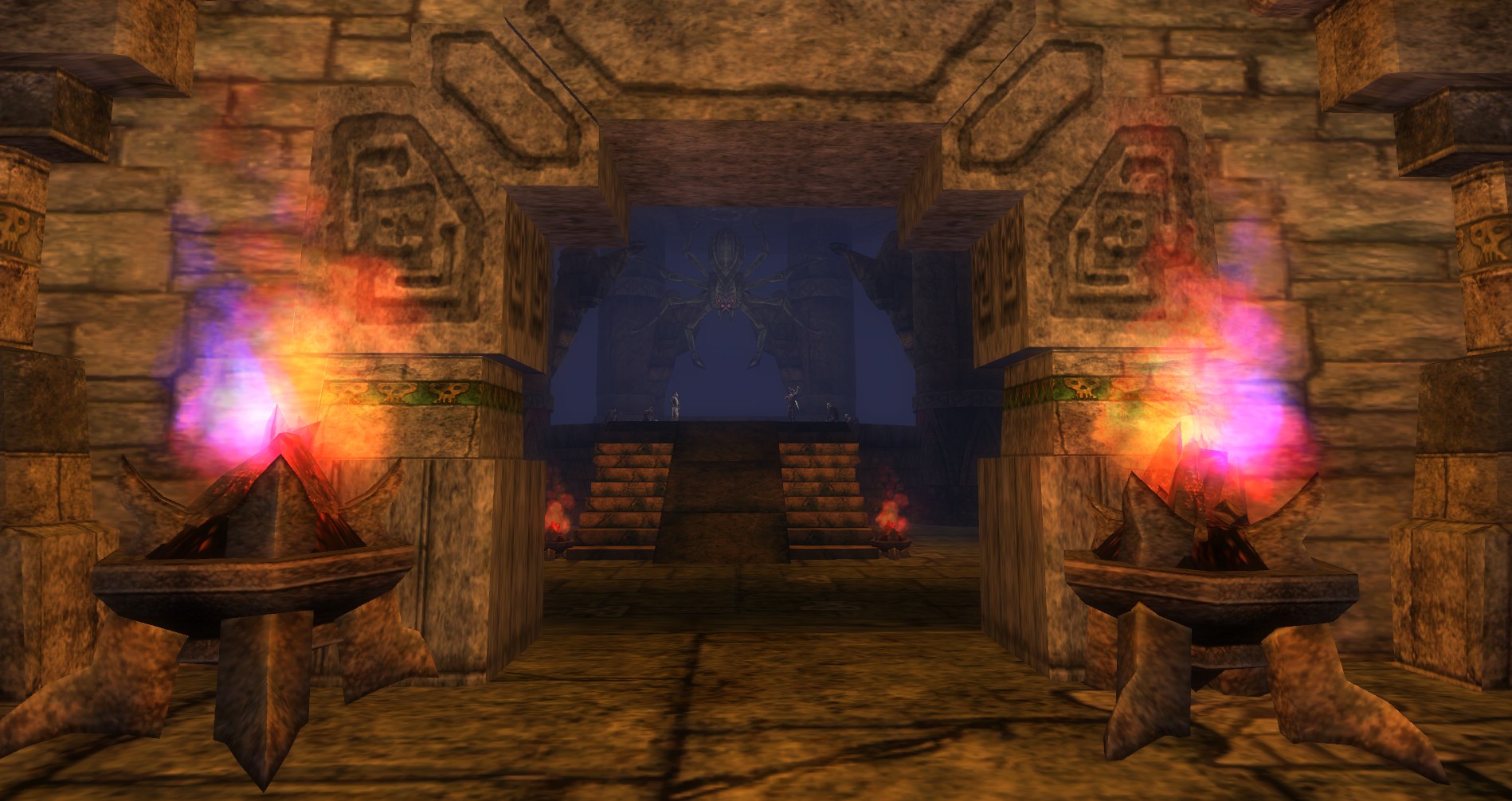 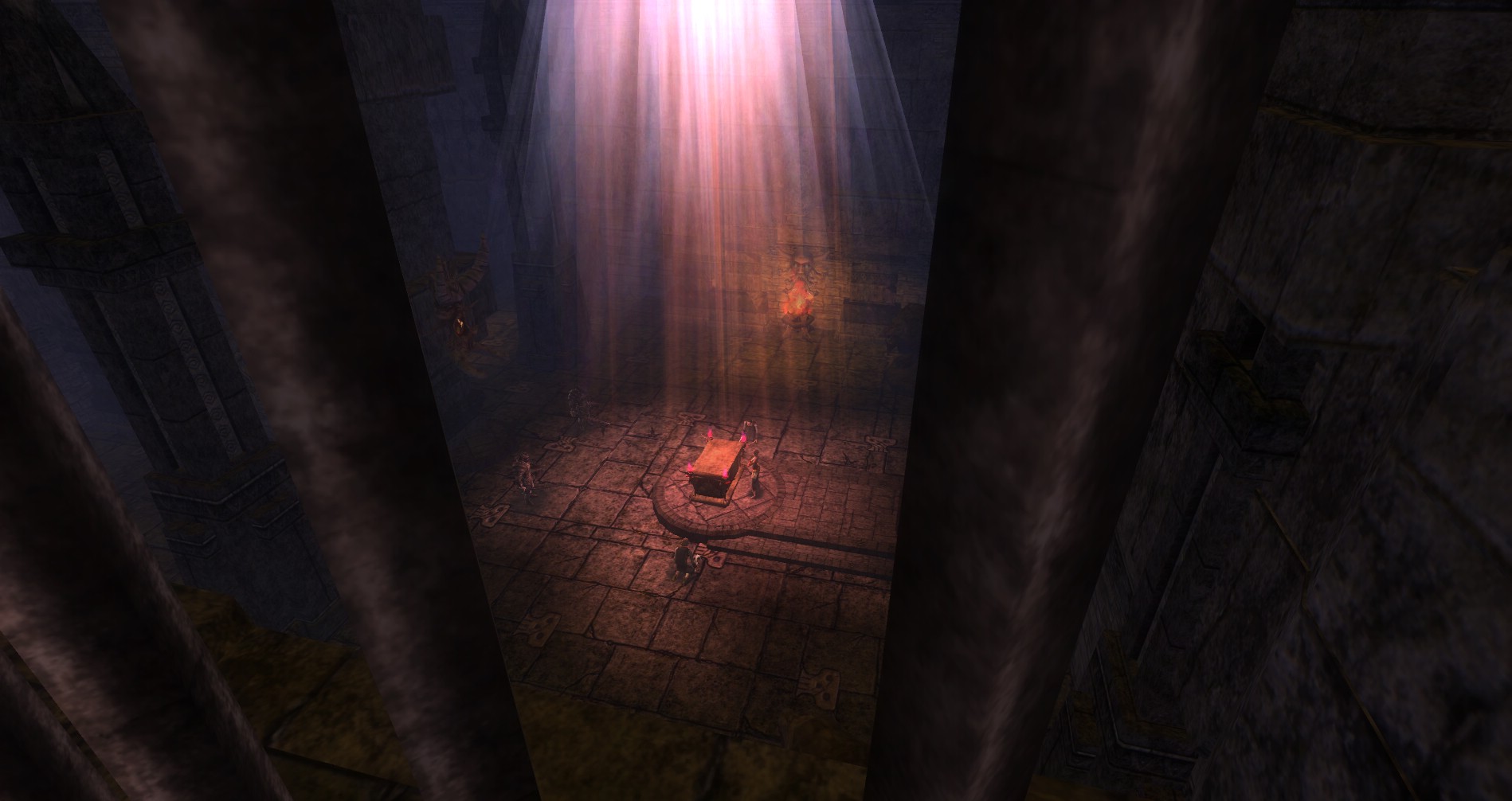 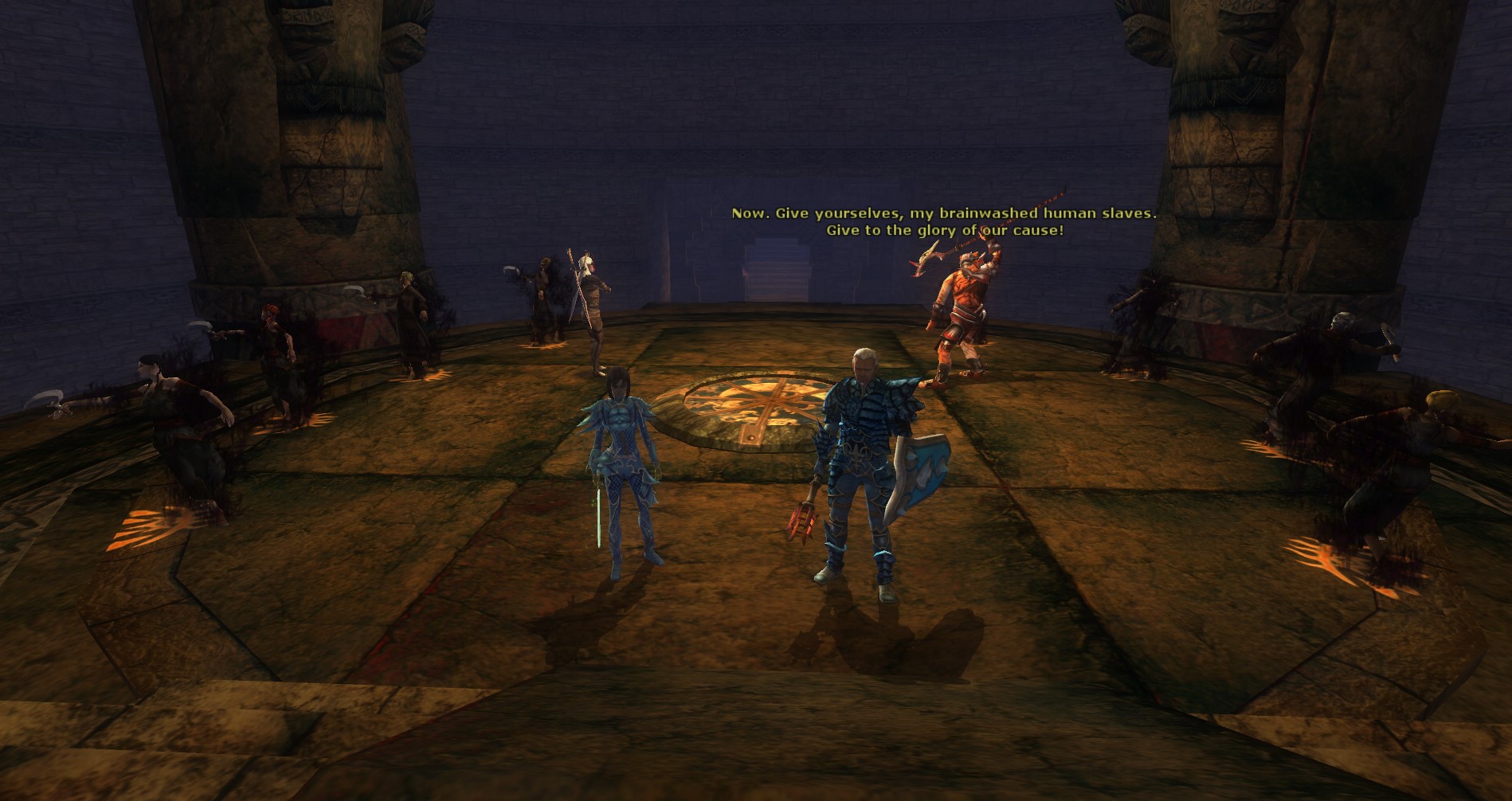 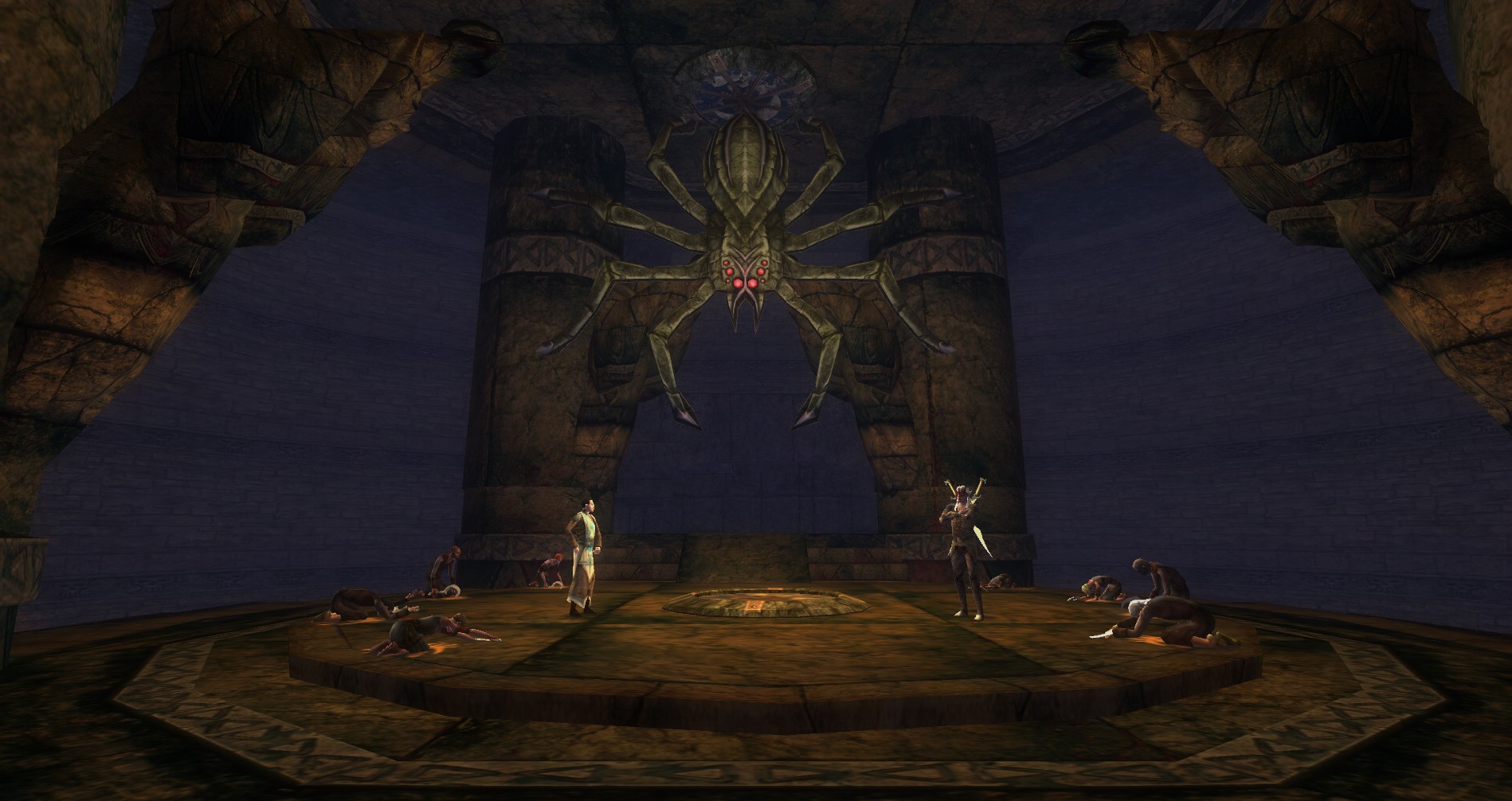 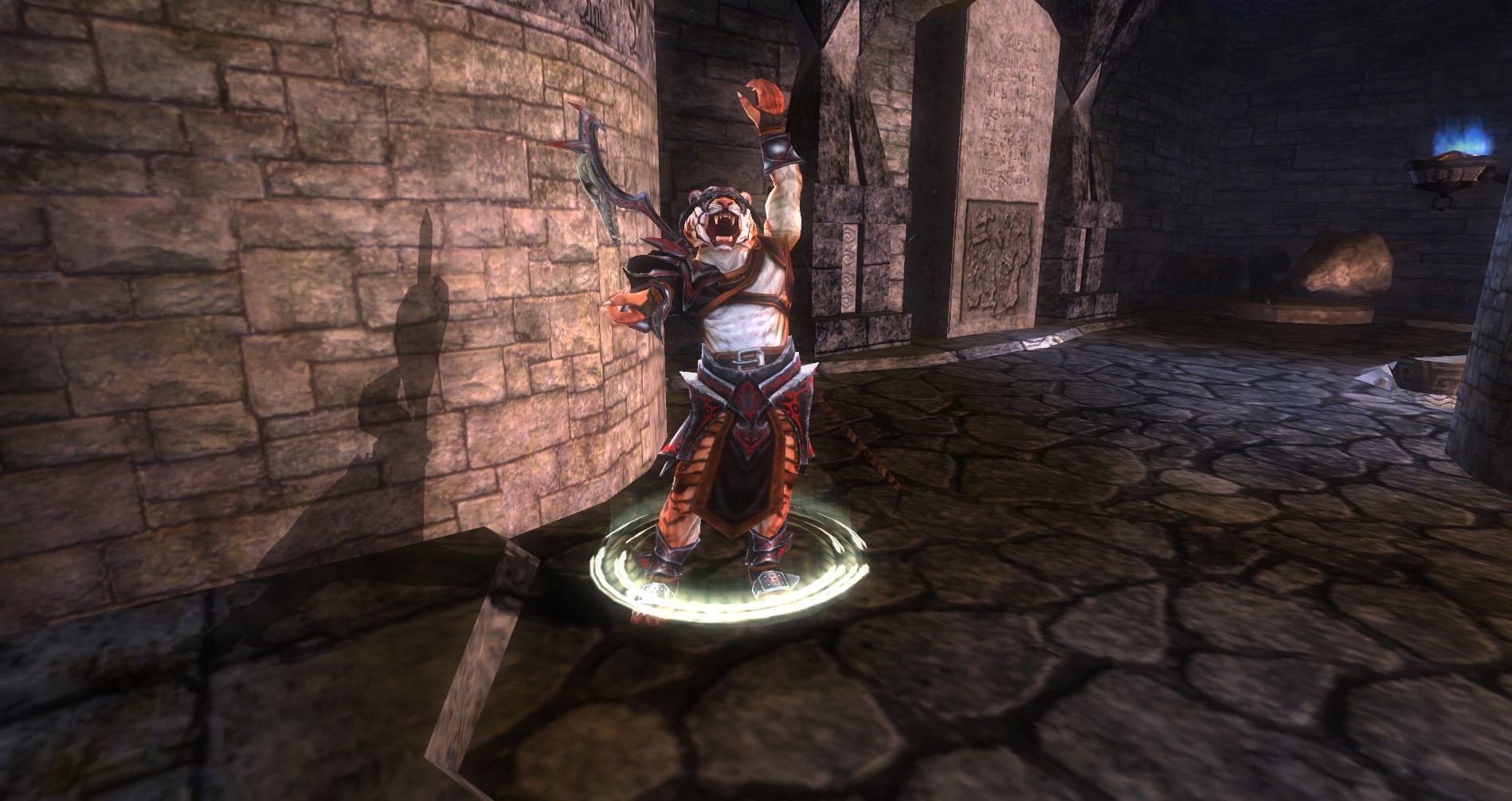 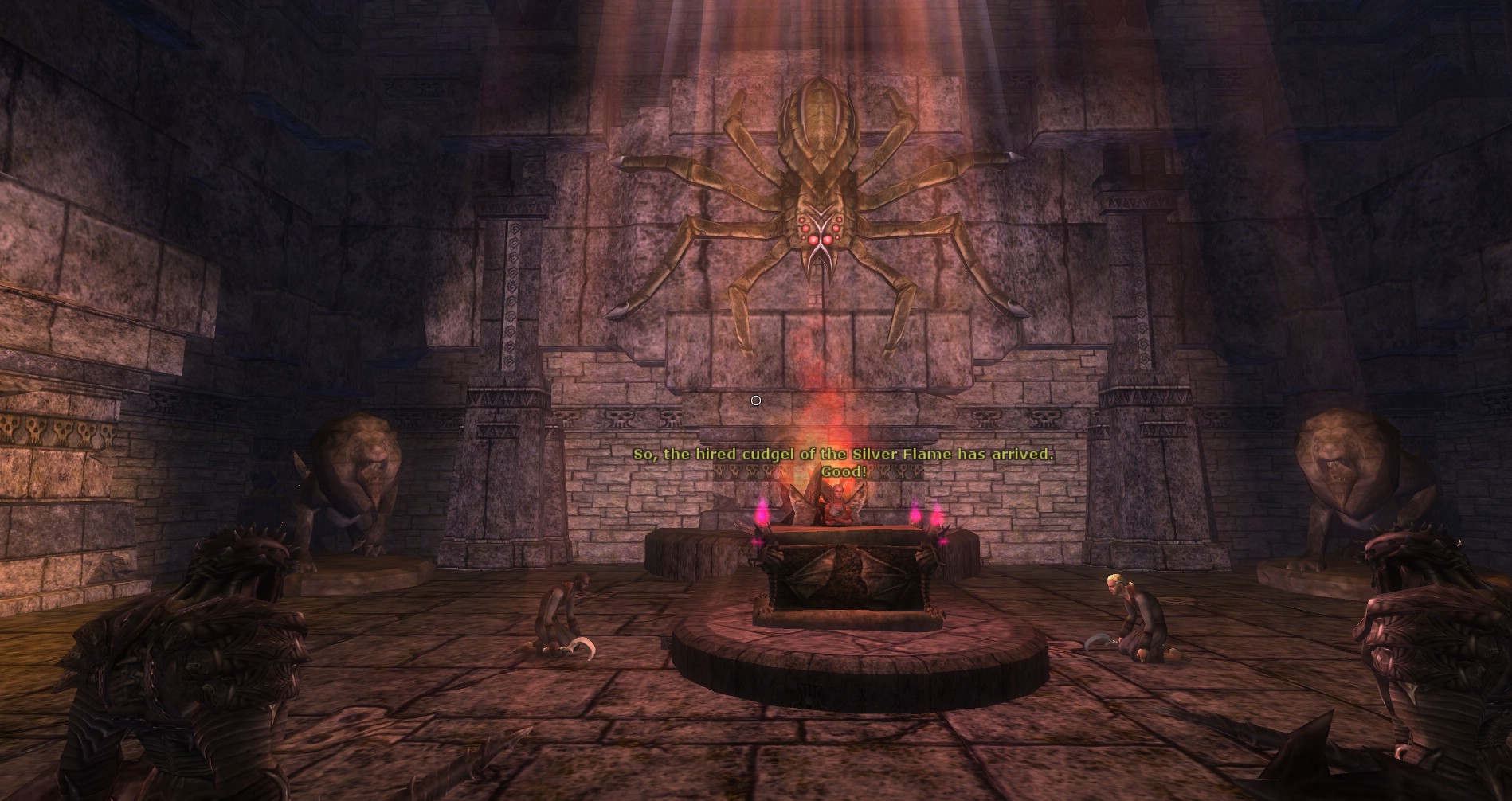 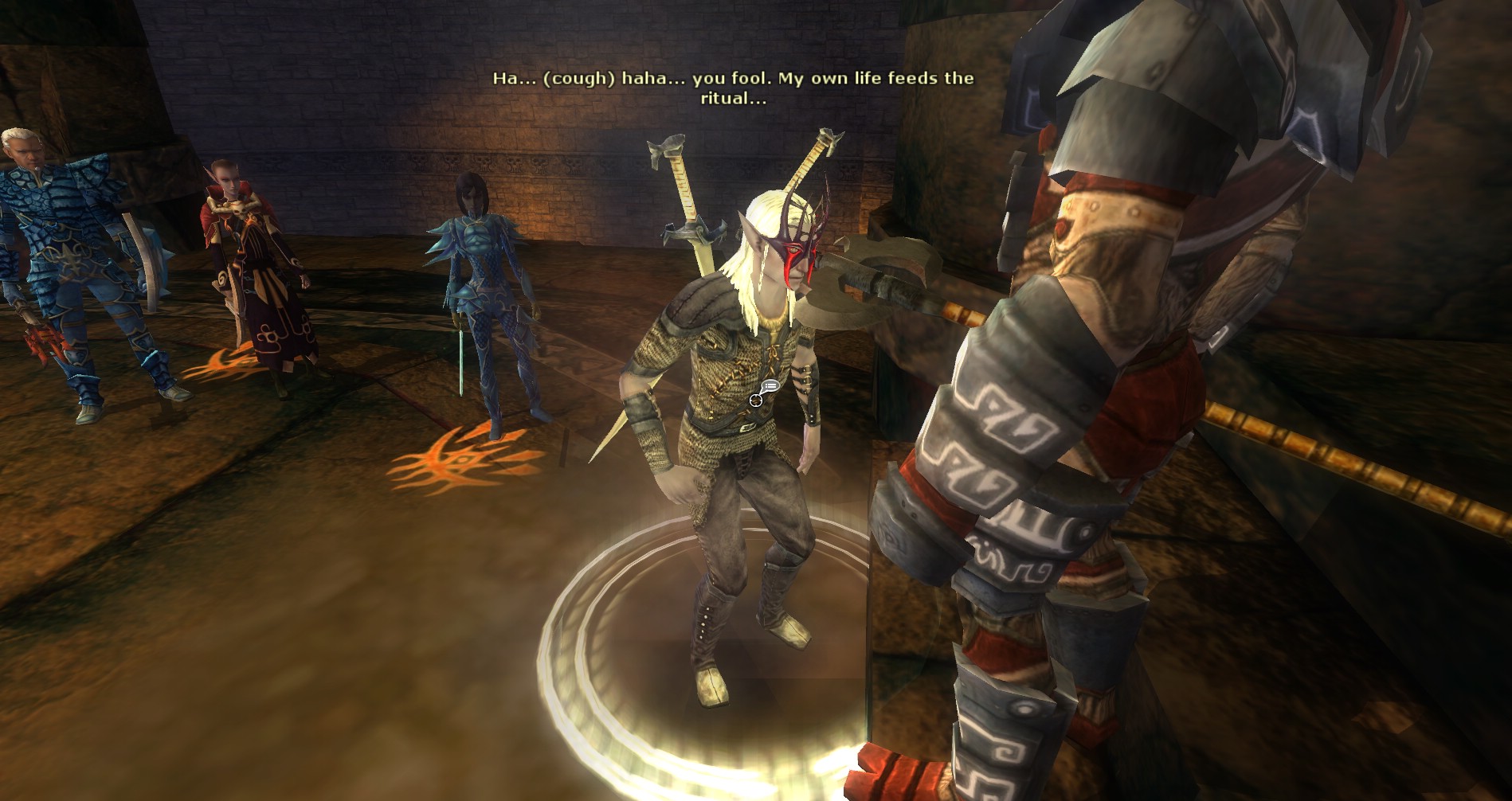 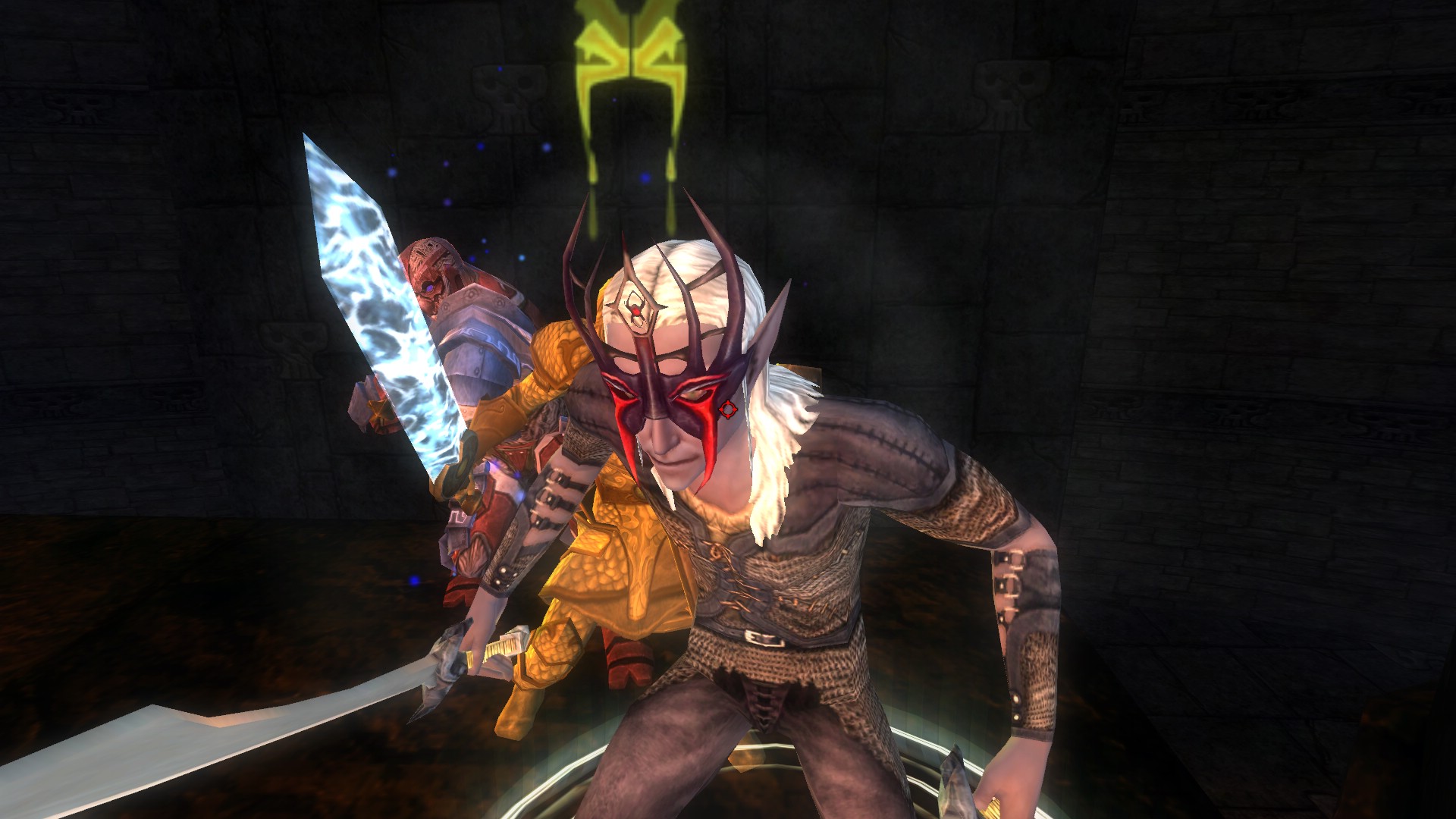 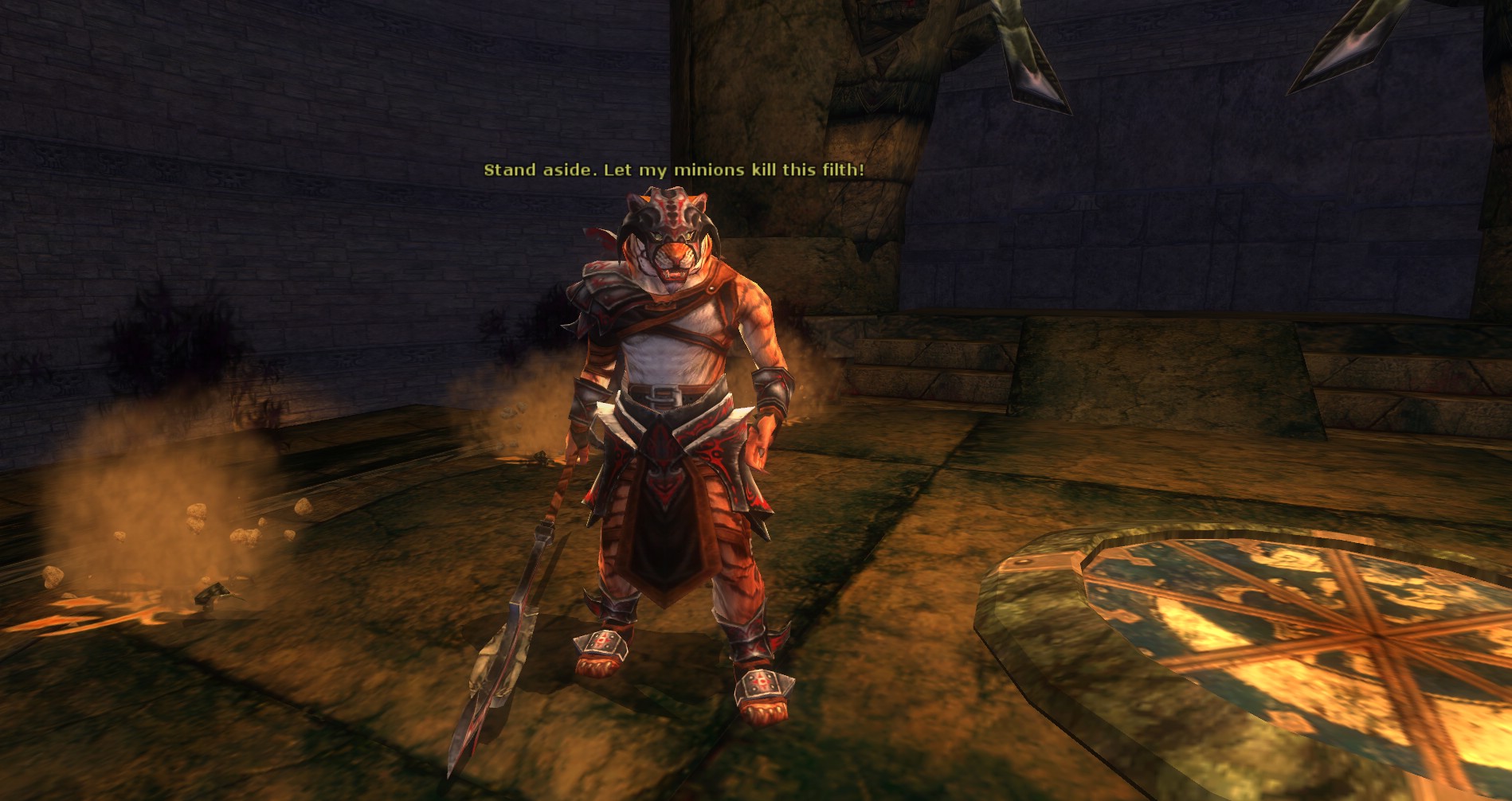 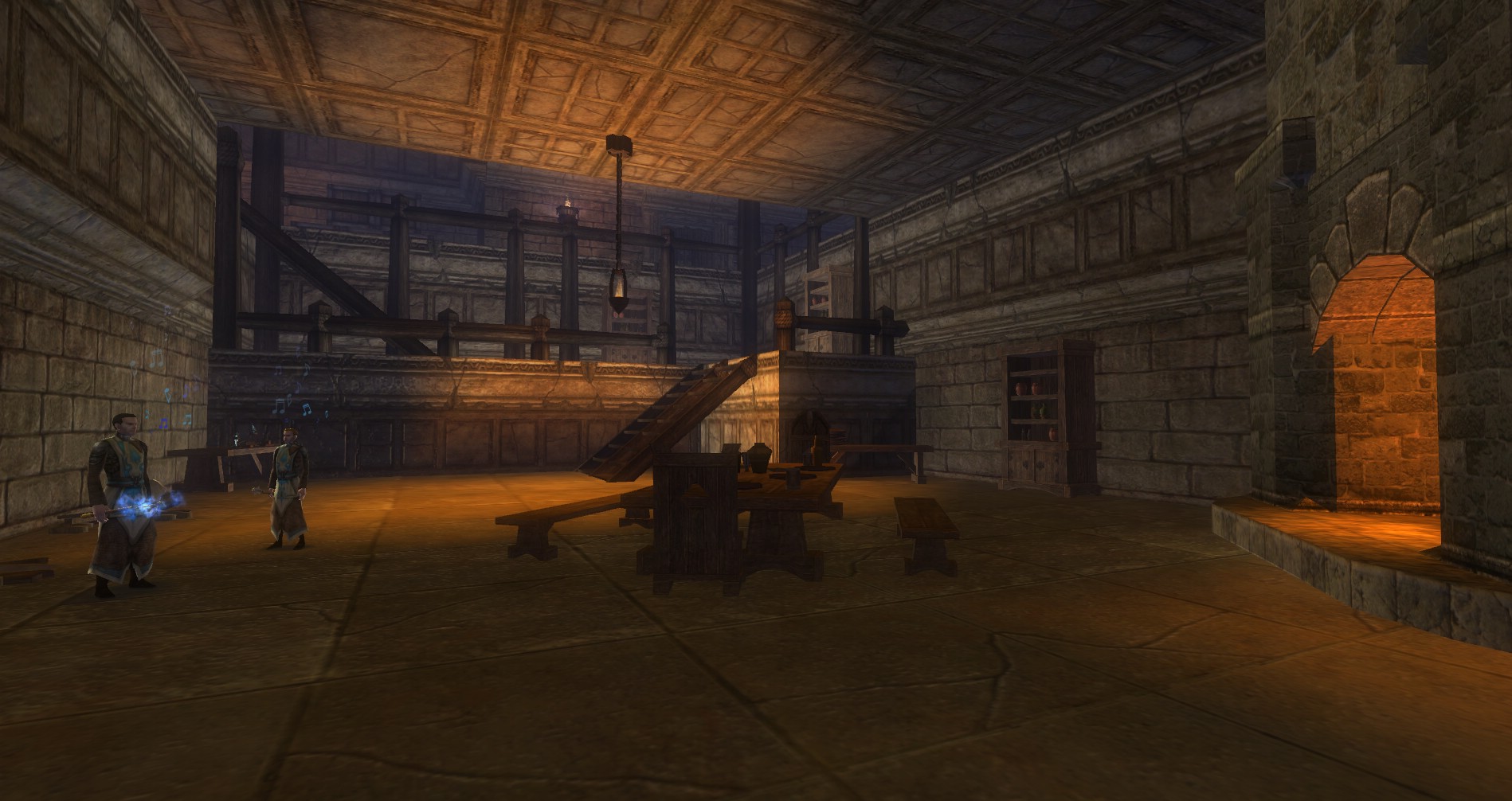 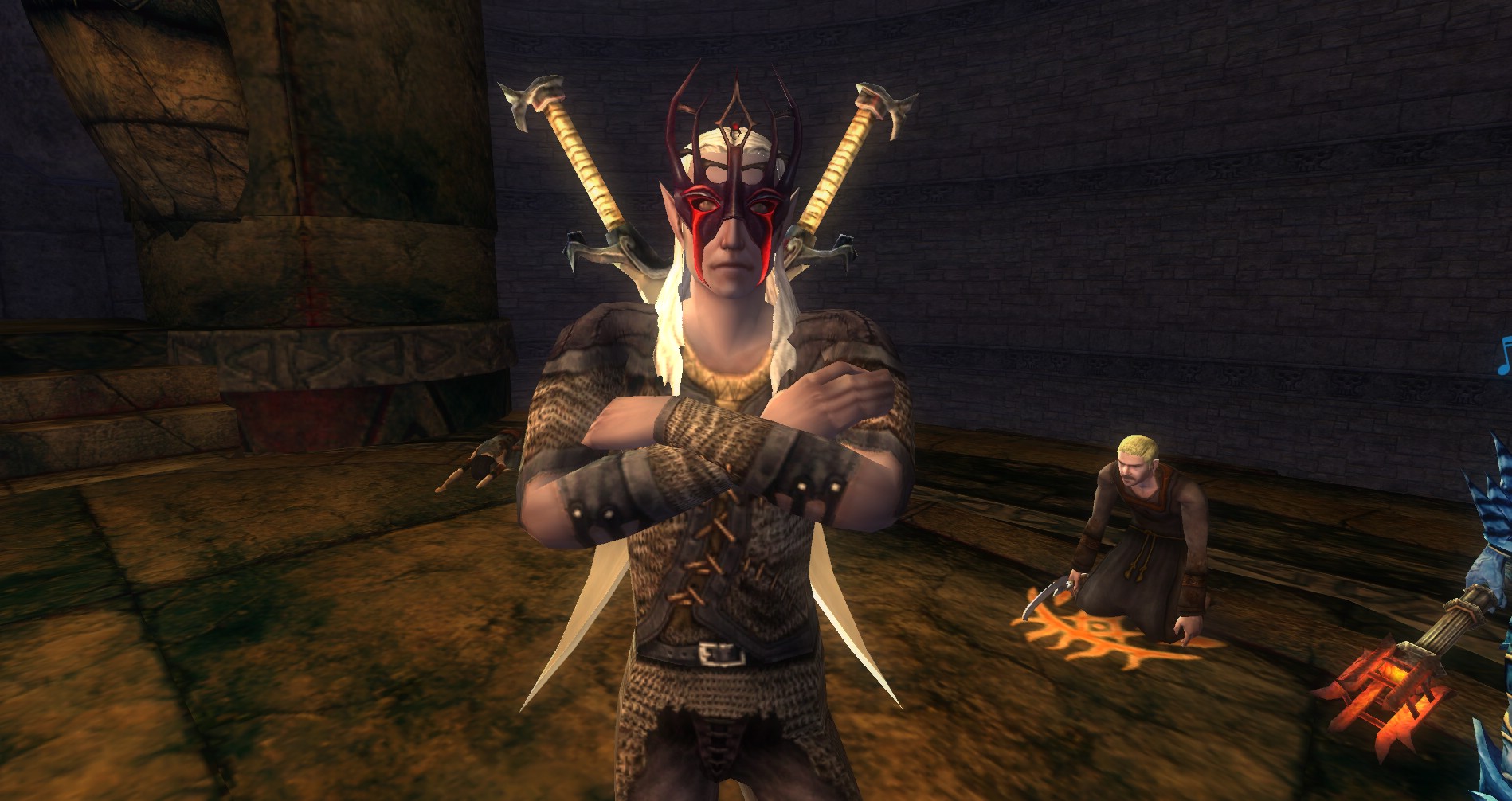 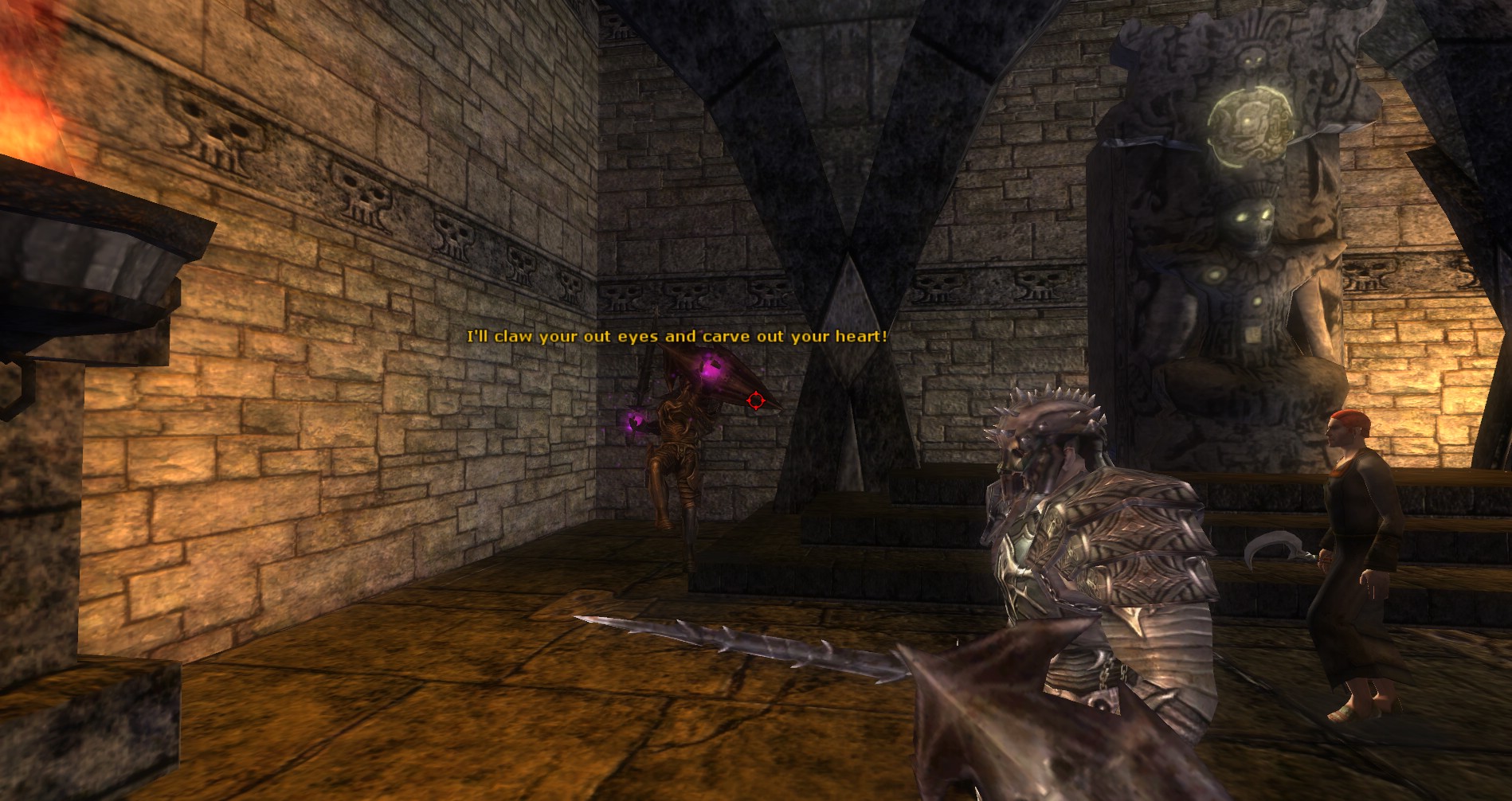 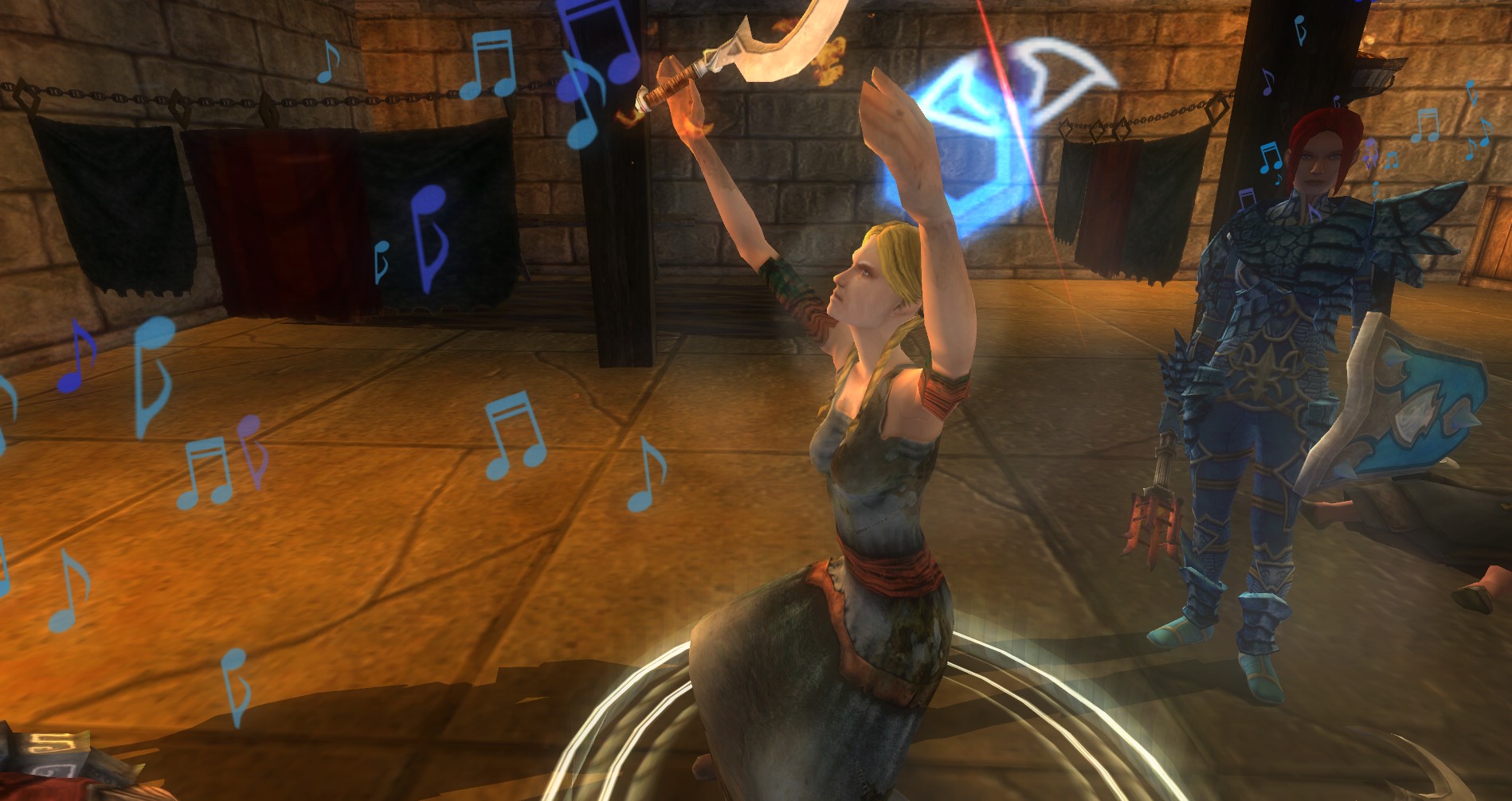 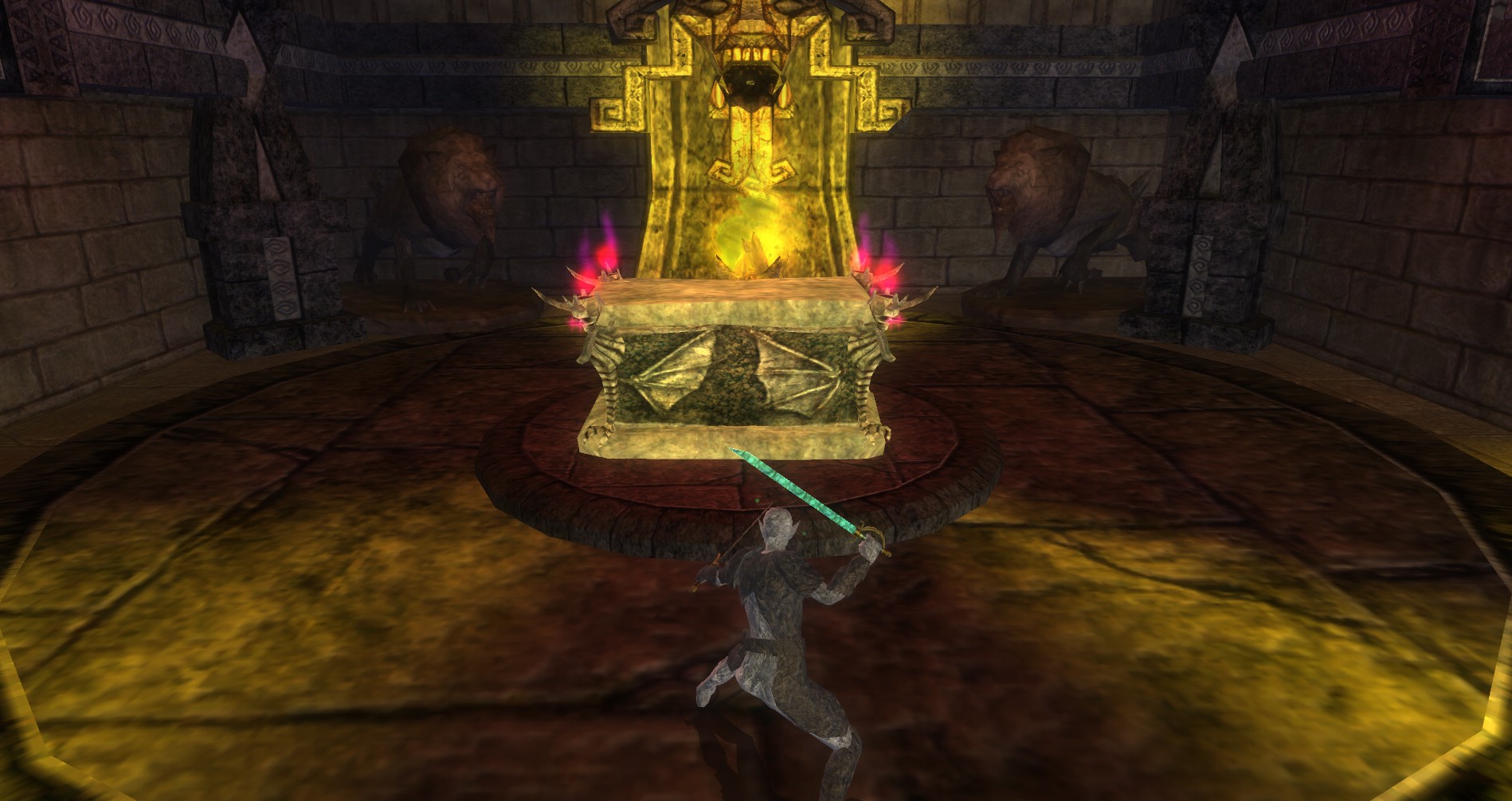 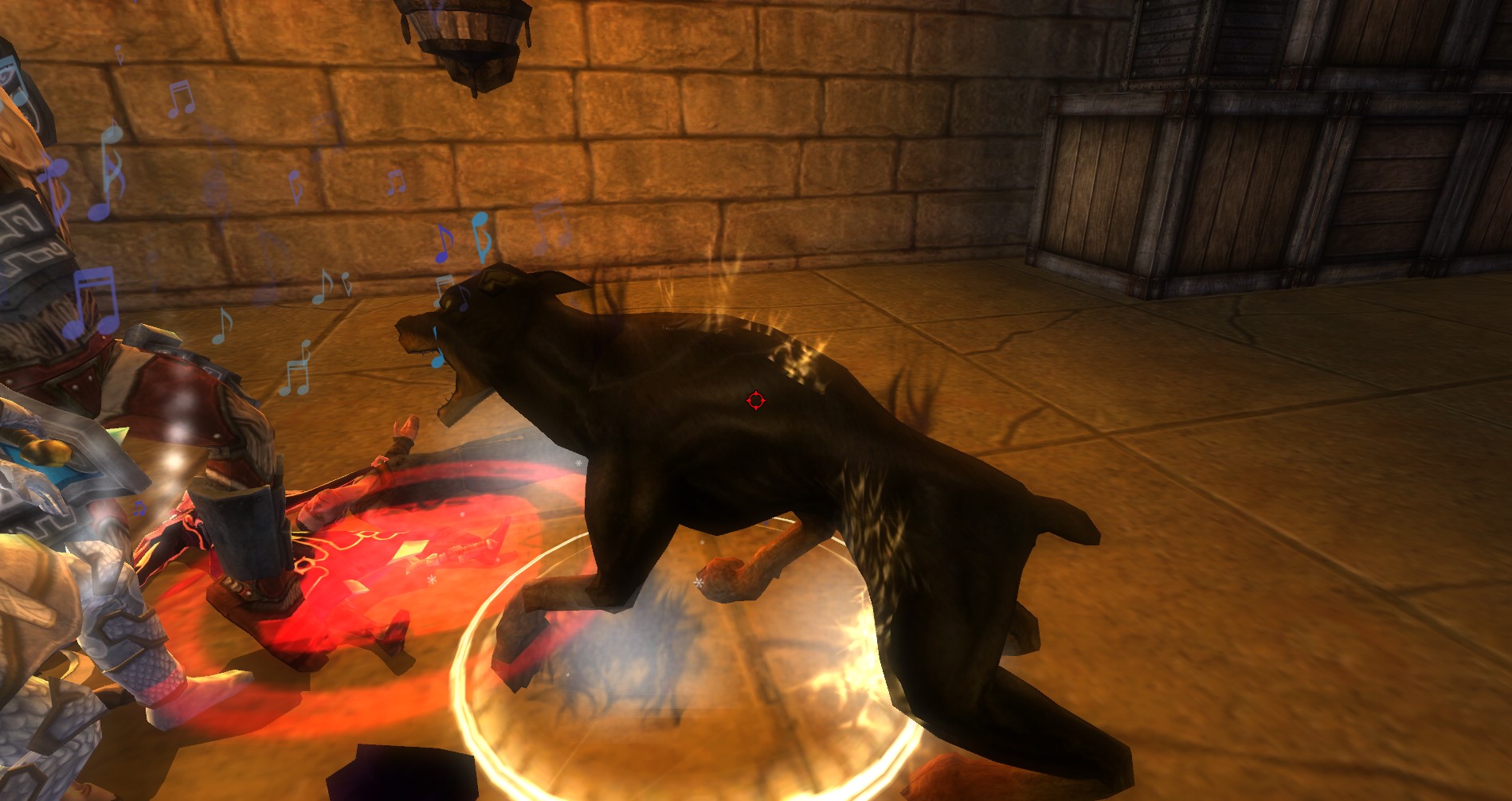 Once you zone in, summon pets or hirelings and buff them up. There are a couple of silver flame members just inside, but you don’t need to worry about buffing them.  They will soon be doing their own thing. When you are ready, talk to members of the Silver Flame, toss your short term buffs (such as Prayer and Haste), and then get to work clearing out the warehouse.

Once you open the door, you’ll get a glimpse of what they are doing here. Interrupt their conversation and attack. Take care of them and move up to the second floor landing, where you’ll take care of the guard dogs and other cultists here.

You split off from the Silver Flame and head in your own direction. Make sure to open all doors along the way. There is a room off to the north just after you split up that will have an altar in it. Destroy the altar or bless it for the optional.

NOTE: If you purify the altar instead of breaking it, you can get an extra chest on top of the optional XP. Have the healer hit the altars to purify them. Not every character will have the option to purify them. All three altars will need to be purified in order to get the chest.

As you make your way through, make sure that you break everything you can for the Ransack bonus.

When you head back south, make sure you stop at the door to the west. It leads to the second altar.

There is a named dog that can spawn in the hallway here, Bastion. He is big and not as mean as he looks.

When you get to a dead end, look for a bookcase with scuff marks below it. Break it to reveal a lever that opens up the second altar.

There are a few mobs inside. Take them out and deal with the altar, then continue south.

Going Up before Going Down

Head up the stairs and you will find the novice of the Silver Flame dead. Just past this, there are many more mobs, so be ready for a fight when you open the door.

In the next room you will find Marideth, take her out and then take her stuff. She is a mean caster so drop her fast.

Next to Marideth’s chest there is another book case that conceals a lever for a secret door. Break the book case and hit the switch to reveal the route to take you deeper into the warehouse.

Into the Bowels of the Dungeon Head Down

Shrine up here after the Marideth fight, then buff up. Send your rogue down below. There are a bunch of traps in the rest of the dungeon so it is a good idea to have a rogue disable these, especially if you are running on elite.

If you don’t have a trapper, then you can try to Haste/Featherfall over the blade traps on your way down. Once you are hit by a trap, stop immediately, since there is a series of successive traps here that will kill just about anyone that gets hit by all of them on elite.

Once you are at the bottom and past the traps, make sure you are healed and ready. Then hit the gate to zone into the underground temple to the Lords of Dust.

Temple to the Lords of Dust

Head below and watch the scene unfold below you. There is a barred ledge to your right where you can see your enemies talking but cannot get down to them. Now you are starting to get an idea of what is really going on here.

Work your way down and swing around to enter the last alter room.

Watch out for the one behind the altar; it turns into Tahmael, a Rakshasa Lord!

Take care of the last altar.

Once you have looted your chests, head out through the other door.

There is a small room just after the third altar room with a shrine. Shrine up, recover and buff up for the last leg of this quest.

The Hallway to the Inner Sanctum

The next hallway is full of traps so be careful and take your time. Let your trapper do their thing to save you some healing–you may need all you can save for the final fight.

Just around the first corner where you detect a trap but cannot see anything is an ambush. The ambush seems to spawn a trap so you are dissuaded from retreating.

Take out the Rakshasa Lord quickly and then dispatch his Kyber Jariliths and make your way down to the final room of the temple: a worship hall dedicated to the Spinner of Webs!

The final showdown here happens in several stages. First, the evil villain has to monologue for a bit. Once he is done revealing his plans to those that are about to die he sends the first wave at you.

The skeletal sacrifices are not too bad. They are designed more to soften you up and use resources before the real fights. Don’t let them fulfill their goal. Once they die Gnomon laughs and attacks.

Gnomon can be a total pain. He is a high level cleric Rakshasa Lord so be ready for Blade Barriers and Comet Falls. Take him out quickly or he will take you out.

Finally when Gnomon drops, Karas the Drow will attack. He is not too bad, compared to Gnomon, but make sure you can get a tank on him so de doesn’t run around backstabbing and poisoning everyone.

Once he drops, the ritual is complete and the pathway to Kyber is open. Wait, what? Yep, you just played right into their hands…

Since you opened the pathway to Kyber, you might as well go talk to the Silver Flame in the harbor, check out your handiwork, and see what you can do to fix the mess you were supposed to solve.

This is all in preparation to give us a way to travel from Eberron to Forgotten Realms for the new expansion coming out this summer. So make sure you get this series done as it may be a requirement for access to the new content.