In this guide, I will show you how, what, and where to hunt so you can make the most of tracking down that awesome gear you want for your character.

Getting Started with Hunts

The first couple quests that you get in the new city will be to go after rare “hunt” creatures. Any of the “hunt” creatures will qualify for these starting quests. However, once you get to the repeatable quests you will likely want to hunt down specific “hunt creatures” for a chance at the rare loot they can drop. To find out what you might want, open up your collections window and look through the items that come from hunts.

There are multiple tiers of Hunts in the Jungle of Chult. The first-tier hunt creatures will spawn randomly in the Jungle of Chult at the corresponding creatures regular spawn locations. These will be special named mobs and will look different than the normal mobs. This helps them stand out. Kill these creatures to collect trophies from them. Later, you will turn in these trophies for lures to hunt the higher tier Hunt Creatures.

Important Note: Trophies are EXCLUSIVE. This means you can only have one on you at a time. When you get one immediately mail it to yourself. This way, you can continue to collect trophies. You don’t want to miss out on a drop. If you happen to have one in your inventory when another drops you will see a message saying you can only have one at a time.

Below is a list of the rare creatures that spawn in the regular creature spawn areas in the Jungle of Chult. 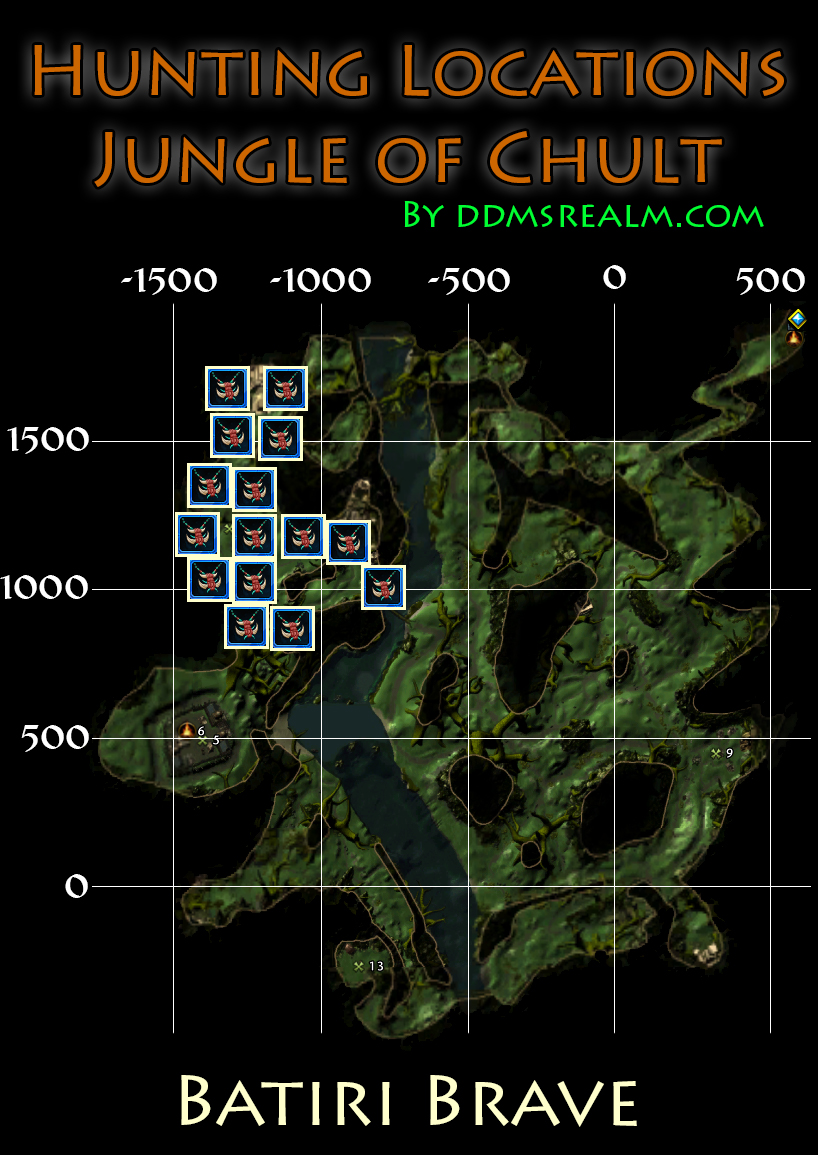 *Click next or back to page through the rare creature spawn location maps.

Base Trophies for One Star Hunts

About 1 out of every 10 times that you kill a Hunt Creature it will drop a trophy. This trophy, along with a Tyrannosaurus Fang can be given to someone in the south-eastern section of the port city connected to the Jungles of Chult.

First and foremost, complete the one-star Hunts campaign task. Without it, you will be unable to purchase the trophies for hunts. I suggest getting the first-tier hunt task done ASAP. This way you can farm hunts for Forgotten Totems after you reach the weekly limit.

These hunts are the more advanced and dangerous in the Jungle of Chult. You might want to bring a group for these. If you are grouping with strangers make sure to form the group yourself. Set the group loot mod to you (the leader) with a blue threshold. This way you can be sure you get the loot that drops from your lure!

Forgotten Totems are the main currency of the Jungle of Chult campaign. With hunts, you can earn extra which do not count against your weekly Forgotten Totem maximum. This is a good incentive even if you do not need the gear! Players can earn 1-5 bonus totems per hunt.

Other Loot from Hunts

Are you a patron? Check out the special insider info video I created just for Patrons. It gives specific tips, tricks, and methods for rocking through whatever Hunt you are after!

Special thanks to patron Homer O Cole III! Thank you so much for your continued support!

Not yet a patron? Become one today!

That wraps up all you need to know to get started with Hunts in the Tomb of Annihilation module for Neverwinter. Hunts are a great way to get some extra gear which will really help for this campaign. Hunts are a good way to get a few extra Forgotten Totems to advance the campaign faster. Plus, Hunts add a different quest dynamic which helps to keep your time in the Jungle of Chult productive. Good luck on your drops from the Hunts you find in Neverwinter!